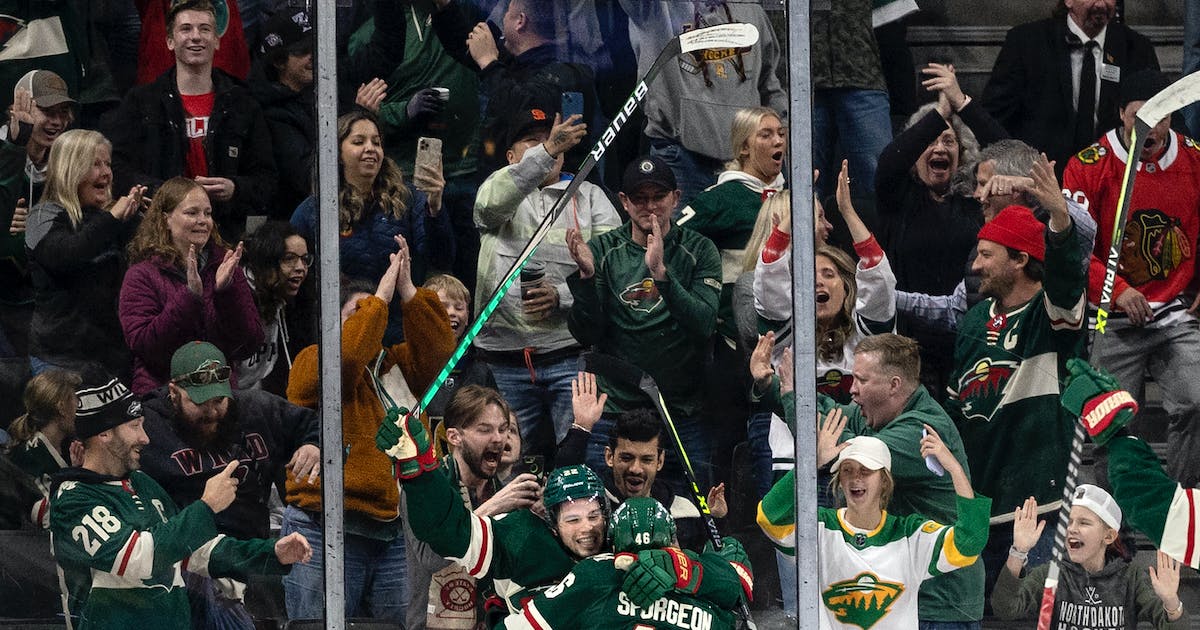 The Wild needed only one point to clinch a playoff berth, a box it checked when the team wrapped regulation tied with the Sharks.

But the second point the team picked up minutes later was even more important.

Not only did it mean the Wild avoided an upset by a lowly San Jose squad that had dropped nine in a row, but persevering 5-4 in overtime on Sunday in front of 19,029 at Xcel Energy Center also ensured the team didn’t lose any ground to the Blues in the Central Division during their ongoing battle for home-ice advantage.

The Wild remained in third with 101 points, just a point back of No. 2 St. Louis with one game in hand and less than two weeks to go in the regular season. The second seed will host the third in the first round.

“We’re going to make sure to win as much as possible,” Kevin Fiala said, “and then let’s see where it stands.”

If it wasn’t for Fiala, the Wild might not have booked its ninth trip to the postseason in the last 10 years and 12th overall.

He scored the goal that extended the action before setting up the game-winner, a shot that was tipped in by captain Jared Spurgeon 1 minute, 5 seconds into the extra session. It capped a four-point effort that matched Fiala’s career high for the second time.

His three assists were a career best, and the overtime goal was the fourth of Spurgeon’s career and second this season. That improved the Wild to 10-0-1 at home over its last 11, 4-0-2 during the past six and 15-2-4 since March 8.

This is the fifth time the franchise has reached 100 points.

“You can tell when he’s taking over a game,” Spurgeon said of Fiala. “He’s so dynamic. He’s strong on his skates, and he can shoot. He can pass, and it’s fun to watch when he gets going.”

Matt Boldy polished off a loose puck that Fiala got a piece of later in the second, at 6:37, but Noah Gregor answered back by 11:11. Then a shorthanded tally by Nick Bonino 1:37 put San Jose ahead, further emphasizing a poor performance by the 0-for-5 Wild power play. The Sharks went 0-for-3, with James Reimer making 23 saves. Marc-Andre Fleury, who’s now 6-1 with the Wild, had 26.

“We were just trying to do too much and being too fancy,” Spurgeon said. “Just trying to make plays that weren’t there and fed right into their game and then gave them some life.”

But Fiala flipped momentum back to the Wild’s side at 8:54 when he tipped in a Jordie Benn shot, his 29th goal of the season.

And when he took to the ice in overtime, Fiala put the finishing touches on the comeback by getting the puck toward the net for Spurgeon’s deflection.

“We almost got what we deserved tonight,” coach Dean Evason said. “We were very fortunate really to have success in that game.”

Fiala is up to 12 points during a six-game point streak, and his line with Boldy and Frederick Gaudreau totaled nine points after Boldy also had an assist and Gaudreau three. Boldy (five games) and Gaudreau (four) are on career-high point streaks.

But that the Wild still rallied despite not being sharp was key.

No doubt the process is important, especially this time of the year with playoffs on deck, but an outcome that sealed a playoff spot and kept the gap between the Blues the same was significant.

“Hopefully this is a game that’s a one-off because you don’t want to be having the run-and-gun games like this so late in the year,” Jake Middleton said. “But definitely a nice feeling to clinch.”