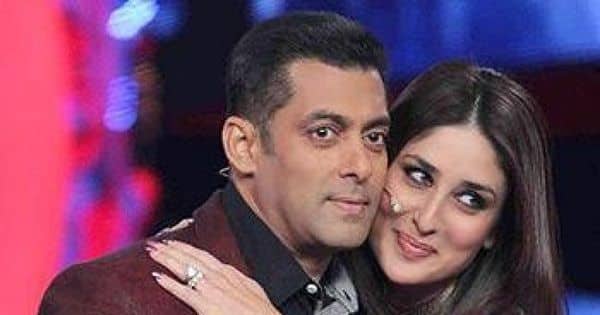 Kareena Kapoor Khan is one Bollywood actress who has had worked with the three Khans – Shah Rukh Khan, Salman Khan and Aamir Khan, in her acting career. While Kareena had praised Shah Rukh and Aamir acting chops, she had criticised Salman saying that she is not his fan and went on to call him a bad actor. Also Read – Salman Khan REPLACES Shreyas Talpade, Arshad Warsi with Aayush Sharma, Zaheer Iqbal for Kabhi Eid Kabhi Diwali: Report

“I’m not at all a Salman fan. I don’t like him, he’s a very bad actor. I tell him that he hams all the time. Aamir Khan’s good, I really liked him in Hum Hain Rahi Pyar Ke and Qayamat Se Qayamat Tak, but out of the Khans, I’m a total Shah Rukh fan. I’m totally in love with him. Don’t even ask me about him because if I start I won’t stop talking about him for hours. Amitabh Bachchan and Shah Rukh are the only two actors I admire. There is something about Shah Rukh that is amazing. He has that very boy next door appeal which makes every girl want to take him home to her parents. His performances touch me,” Kareena had said during her old interaction with fashion designer Umesh Jivnani. Also Read – Tiger 3: Salman Khan-Emraan Hashmi-Katrina Kaif fans can’t keep calm because of THIS reason – see Twitter reactions

While Kareena is known for being brutally honest about her Bollywood contemporaries, Salman never reacted to Bebo’s statement about him. For the uninitiated, Salman and Kareena was worked together in Bodyguard, Bajrangi Bhaijaan, Kyon Ki… and Me and Mrs Khanna. Also Read – Merry Christmas BTS: Katrina Kaif pictures with South actress Radhikaa Sarathkumar from the sets get leaked

On the work front, Salman is currently shooting for his upcoming film Tiger 3 with Katrina Kaif and Emraan Hashmi. He also has Kabhi Eid Kabhi Diwali in the pipeline. Kareena, on the other hand, is awaiting the release of Aamir Khan’s Laal Singh Chaddha.