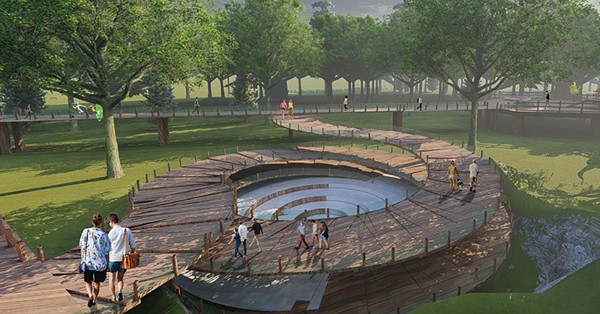 A rendering of potential redevelopment at the Belle Isle Zoo.

An outdoor classroom, pollinator garden, and performing arts center are a few options being considered for a revamp of the former Belle Isle Zoo.

The Michigan Department of Natural Resources is asking for public opinion on what to do with the zoo, which has been abandoned since 2002, in an online survey available until July 4.

The survey asks people to rank themes that are important to them when considering future developments, including honoring and exploring Belle Isle’s history, showcasing the island’s opportunities for sustainable ecosystems, providing ample outdoor education opportunities, elevating creative and performing arts in nature, offering interactive outdoor adventures and concessions, and making space to retreat to and interact with nature and each other.

The options pretty much boil down to whether you want to see more natural terrain like native plants and gardens, or family-oriented options for kids. Themes were created based on a workshop with park stakeholders and Michigan State University landscape architecture students from last fall.

“We want to get a clearer picture about what people think the old zoo area could be. The survey is the place to let us know which themes you think are most important, as well as the public amenities and natural and built settings you most want to see,” Amanda Treadwell, urban field planner for the DNR Parks and Recreation Division said in a press release. “The results will be an important starting point for more conversations to guide how the old zoo area might be used in the future.”

Survey respondents are shown renderings of what potential developments might look like that were designed by MSU students.

Images for honoring and exploring Belle Isle’s history, for example, include statues of elephants and the restoration of the zoo’s walkway. Wetlands, rain gardens, and native gardens are potential features for sustainable ecosystems. An outdoor adventure focus could mean more playscapes for children.

A bird’s-eye view of the Belle Isle Zoo.

The renderings aren’t final, they’re just to give you a general idea.

While many aspects of Belle Isle have been cleaned up since it became a state park following Detroit’s bankruptcy in 2013, the zoo remains a shuttered ruin coveted by urban explorers.

The zoo was offered up like a ritual sacrifice in 2002 by then-Mayor Kwame Kilpatrick in an effort to save the city some cash. Residents and city council largely opposed the decision and approved a bond to fund the zoo’s reopening in 2004. As things tend to go in Detroit with our screwhead leadership, Kilpatrick used the bond money to fund Belle Isle’s Nature Center with programming like nature hikes instead.

Belle Isle is one of Detroit’s greatest and underrated assets. Not for things Detroiters could care less about like the Grand Prix, but for the opportunities it provides to connect with nature right in our own backyard.

Belle Isle is also Michigan’s most frequented State Park according to numbers released by the Michigan Department of Natural Resources. And it’s by a long shot —Belle Isle had an estimated 5.58 million visitors in 2021, compared to Holland State Park which came in second with 2.62 million visitors, Axios reports.