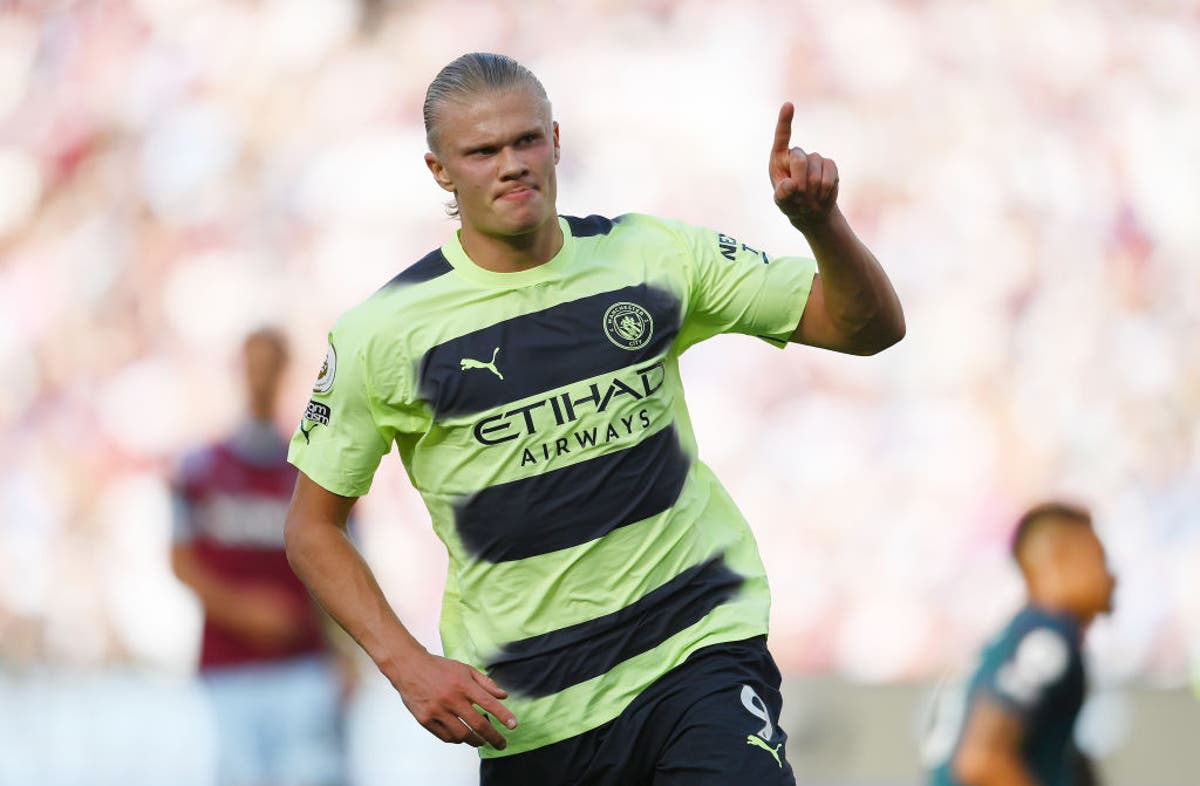 A picture of the future, and an image we’re set to see so many times this season.

That isn’t just Erling Haaland scoring, Manchester City winning and generally looking like they will cruise to another title. It was also the specific manner in which they sealed this 2-0 win over a tepid West Ham.

That is what should be most alarming for the rest of the Premier League, and Europe.

On 65 minutes, in the middle of one of the few spells of the game when West Ham finally decided to step it up and play with a bit of force and energy, we were shown a new risk that is set to become very familiar.

Kevin De Bruyne picked up the ball in the middle of the pitch and, with space finally appearing behind that defence, the Belgian played a divine through ball for Haaland to run onto and slip in his second of the game.

The straight lines were so clean they almost emphasised the sterile industrialisation of City’s dominance.

That picture of the future isn’t so much a boot stamping on a face forever, but an Adidas boot sidefooting the ball into the corner of the net.

There was just such an air of inevitability about it all, right from the start of the game.

For all these pages are willing to discuss the problems of state ownership and how City are the most lavishly funded sporting project in history, part of this was about West Ham, too. They certainly played their part – to invert the usual meaning of that phrase when it comes to football – in a fixture that was anything but a spectacle, or even much of a match.

David Moyes set up in the low block he always does in such games, but it was the same shape with none of the recent energy or impetus. West Ham were completely lacking in conviction, and opened up so easily. The lack of tracking for that second goal summed it up.

That does reflect increasing murmurs of tension in the camp after last season’s peak, and the possibility that this campaign could unravel.

On that, so much for the murmurs that there could be tension with Guardiola, or any doubts over whether he would score.

The immediate pattern of this game made it look likely.

So much of it was City comfortably keeping the ball and just waiting for moments to step up without risk, which was precisely why Haaland didn’t have to wait long for his first goal. It came from just the second time the champions decided to go for it.

Haaland, for his part, did show the other dimension to his game in their first major attack. One brilliant touch turned a passing move into a penetrative one, opening the entire West Ham box, only for an offside flag to deny De Bruyne his goal.

It still just felt a matter of whenever City decided to quicken it, which was exactly what happened, and of course came through the Norwegian.

On 36 minutes, with Haaland waiting for the trigger, Ilkay Gundogan executed an impressive turn in the middle. The forward was sent through, and Alphonse Areola – on for the injured Lukasz Fabianski – clearly wasn’t up to the speed of the game, let alone Haaland.

The Norwegian was fouled, and presented with the opportunity to score the goal he would have scored anyway.

This was one reason it was in no way “cheap” for his first goal to be from a penalty. Haaland had won it and the spot kick itself illustrated an ominous confidence. He just buried the ball into the corner.

That had pretty much settled the game, but partly because a trap had been City.

It might have taken a while for West Ham to actually come out but that was also all it took to seal it. De Bruyne was just waiting for the moment, Haaland was waiting for the ball.

Whether it makes it an inevitability that City will win a third consecutive title and fifth in six years remains to be seen.

It’s still just the first day, and there’s the immense disruption of a World Cup to come. West Ham may also have problems that will actually make them worse than other opposition City will face.

So many, however, will suffer from the same sight.

That is De Bruyne picking up that ball, as Haaland just waits to run. And he’s already on his way.