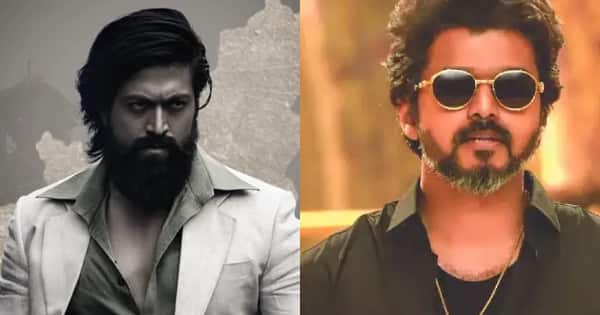 South Film industry’s two giants Thalapathy Vijay and Yash clashed at the box office. Former’s film Beast and the latter’s film KGF 2 made it to the theatres almost at the same time. And well, with two big releases clashing at the box office, one is sure to suffer. In this case, it is Beast. While Thalapathy Vijay and Pooja Hegde‘s film has done well in Tamil Nadu, in the other parts of the country, it has suffered a hit due to KGF 2. Rocking Bhai Yash’s film has come as a tsunami at the box office not only in Southern parts of the country but its Hindi version too is doing extremely well. It has already entered the Rs 500 crore club within a few days of its release. Now, reports are all about their OTT releases. Also Read – Katrina Kaif’s humour wins over influencer Freddy Birdy who earlier had a nasty online tiff with Deepika Padukone

The latest reports state that Netflix has acquired the OTT rights of Thalapathy Vijay’s film Beast. It is expected to premiere on Netflix and Sun NXT on the 11th May. It is exactly four weeks after its theatrical release, Beast will be available on OTT platforms for the viewers to watch. On the other hand, OTT giant Amazon Prime is said to have acquired the rights of Yash’s film KGF 2 which also stars Sanjay Dutt and Raveena Tandon. The film is expected to not hit go live on OTT before June or July. Though some reports state that the film will have its release on OTT in May, there is a strong buzz that KGF 2 will have its OTT premiere only two months after its release. Well, we wonder if the rush to release Beast on OTT within four weeks of its release is a move to recuperate from the box office setback it suffered due to KGF 2. There is no confirmation on premiere dates as yet. Also Read – Bharti Singh reacts on getting trolled for resuming work within 12 days of delivery; says, ‘Hum upar se utri hui pariyaan nahi hai…’

Both Beast and KGF 2 received a great response from the audience but Yash starrer managed to take a lead in this war. Now fans are excited for KGF 3. Also Read – Lock Upp: Munawar Faruqui leaves Kangana Ranaut in tears as he OPENS Up about his mom’s suicide; says, ‘She was screaming…’