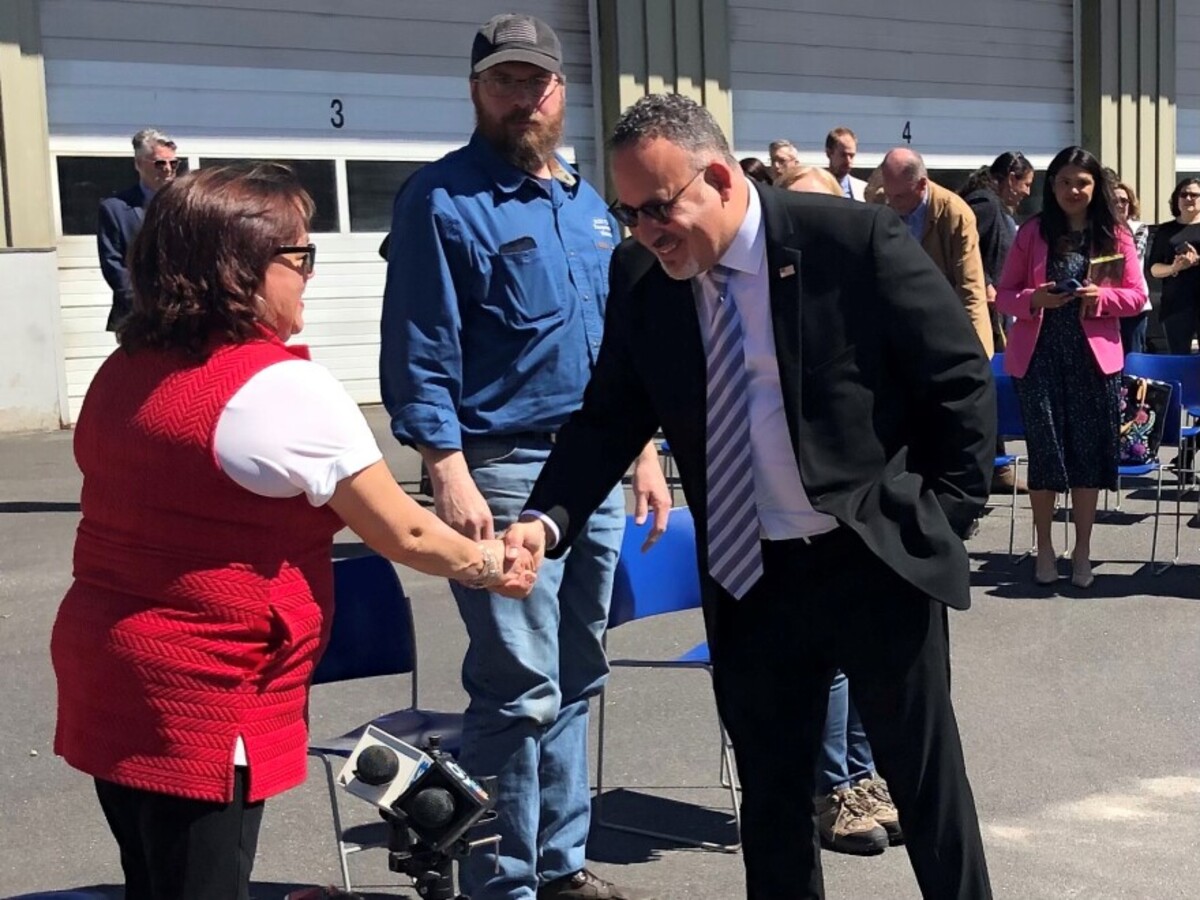 U.S. Secretary of Education Miguel Cardona was in southern Maine on Monday on a listening tour guided by Democratic U.S. Rep. Chellie Pingree.

An event at the Kennebunk school district’s bus depot was billed as a chance to highlight how school officials there used federal rescue funds — that Democrats like Pingree supported — to help keep their buses running while the nation is contending with a driver shortage.

But as they sat in a circle of folding chairs on the depot tarmac, Cardona and Pingree quickly turned to asking the school staff, “well, what else do you need?” Bus driver Dennis Duprey said that while part-time work in the Kennebunk fleet might work well for older Mainers, the next generation of drivers is going to need more.

“We need to look to the future and say ‘come work for us — we can support your family on 40 hours a week guaranteed, year-round.’ I think that’s really important,” Duprey said.

“Thank you, I appreciate that,” Cardona said. “It has to be something where you’re building — offer them more of the benefits and making sure that folks can come in and hear stories from other drivers and say ‘look, I have a family and that’s how I do it.’”

And Cindy Messier, the district’s bus trainer, brought out a new U.S. training manual for drivers — far thicker and more extensive than the previous edition, she said, and filled with material unrelated to the task bus drivers actually perform, such as handling a jack-knifing truck or tandem-trailers. It intimidates recruits, she said.

“So the first the manual is Class A and B. So more than half the manual has more to do with truckers than for busing. I’d like to see a manual that’s just for school bus driving,” Messier said.

Cardona later told reporters that Messier got his attention.

“Saying ‘listen this manual is too thick. We need more bus drivers, making it more difficult to get the license is a challenge.’ So I’m going to go back and say what can we do about that at the Department of Education,” Messier said. “We worked with the Department of Transportation to make it a little easier during this crunch time by reducing the obligation for bus drivers to pass the ‘what’s under the hood’ portion of the test. But this tells me that we’re not done.”

Cardona and Pingree met later with students at York County Community College to discuss support for students who are holding down a job while seeking a degree.

This article appears through a media partnership with Maine Public.