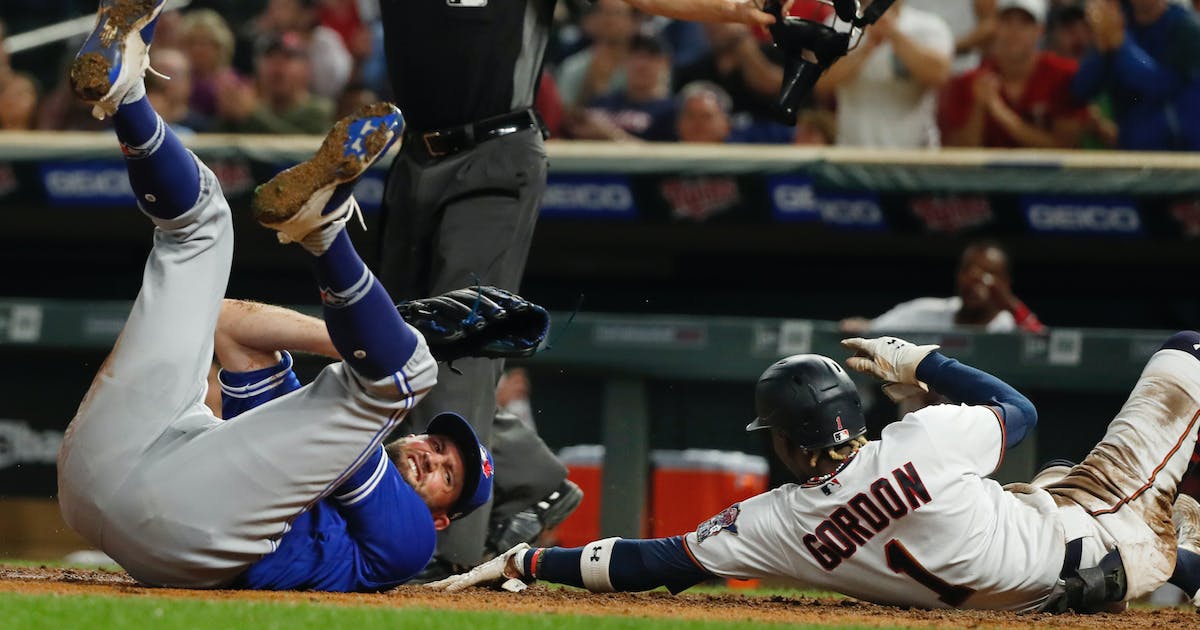 Perhaps because it’s August — or perhaps because there have been a few thousand Blue Jays fans packed in among the 30,000 or so people at Target Field each of the past three nights — but something about this Twins series feels a lot like the playoffs.

And if time did fast-forward to October, when the Twins could feasibly take on Toronto once the postseason commences, the Twins would be looking pretty good to break that 17-year, 18-game curse of no playoff victories.

The Twins beat the Blue Jays 7-3 on Saturday night, taking a 2-1 lead in the four-game series despite the somewhat divided crowd. Whenever Toronto made a good play or needed a bit of motivation, the section above the visiting dugout clad in mostly bright blue would break out with a, “Let’s go Blue Jays!” chant.

“It’s crazy. Our fans got rowdy a little bit coming back,” Nick Gordon said after Friday’s game of Twins fans drowning those out with boos or cheers of their own. “That’s what you look for, though. Their fans travel with them and root them on, and our fans are here as well. And it’s a battle.

“It’s a battle on the field and in the stand.”

After the Blue Jays blew the Twins out 9-3 on Thursday before the Twins eked out a 6-5, 10-inning victory Friday, that metaphor was pretty apt. But Saturday felt much more assured from the start. The Twins are now 57-50, atop the American League Central by two games over Cleveland, while Toronto (59-48) is in distant second in the AL East.

Six Twins hitters contributed at least one hit Saturday, and four of them had multihit games. Luis Arraez, hitting from the leadoff spot, collected three hits, a RBI and two runs. Jorge Polanco added two hits and two RBI. Jose Miranda had a pair of hits, including a solo homer. And Gordon put up two hits, a walk and a run.

“When I see my guys playing hard like that,” Arraez said, “we’re going to win a lot of games.”

Byron Buxton and Polanco drove in back-to-back runs off Toronto starter Mitch White in the third inning to give the Twins a 2-0 lead. It was short-lived, however, as Twins starter Dylan Bundy gave up a leadoff double to Teoscar Hernandez ahead of a Bo Bichette home run to tie the score in the top of the fourth. That Bundy’s final inning, as he left with five hits, a walk and six strikeouts.

Bundy marked his outing an improvement from his other outing against the Blue Jays this season, when he let in five earned runs in Toronto. He said his plan was better this time around, though the rainy weather made the execution a bit “sloppy.” But that was all the detail he would go into postgame.

“I can’t tell you that,” Bundy said about his specific strategy. “We might have to face them again.”

So the pitchers, too, were acutely aware of the postseason ambiance. As a collective, the bullpen gave up just one more run, an RBI single from Bichette off Jhoan Duran in the eighth inning, a run charged to Griffin Jax. Duran and Jax were among four of the Twins’ six bullpen arms Saturday who also appeared in Friday’s game.

The Twins retook the lead in the fifth inning on Polanco’s two-out double. They added on from there: Miranda’s home run and Sandy Leon’s squeeze play scored two in the sixth. Jake Cave delivered a RBI triple in the eighth before Arraez closed out the scoring with a RBI single.

And Arraez, at least, thinks the Twins are ready for the playoffs now, even if they are actually still two months in the future.

“One hundred percent, yes,” he said of the postseason mood. “We’ve got a bullpen, we’ve got starting, we’ve got everything. We just need to play hard and stay healthy.”