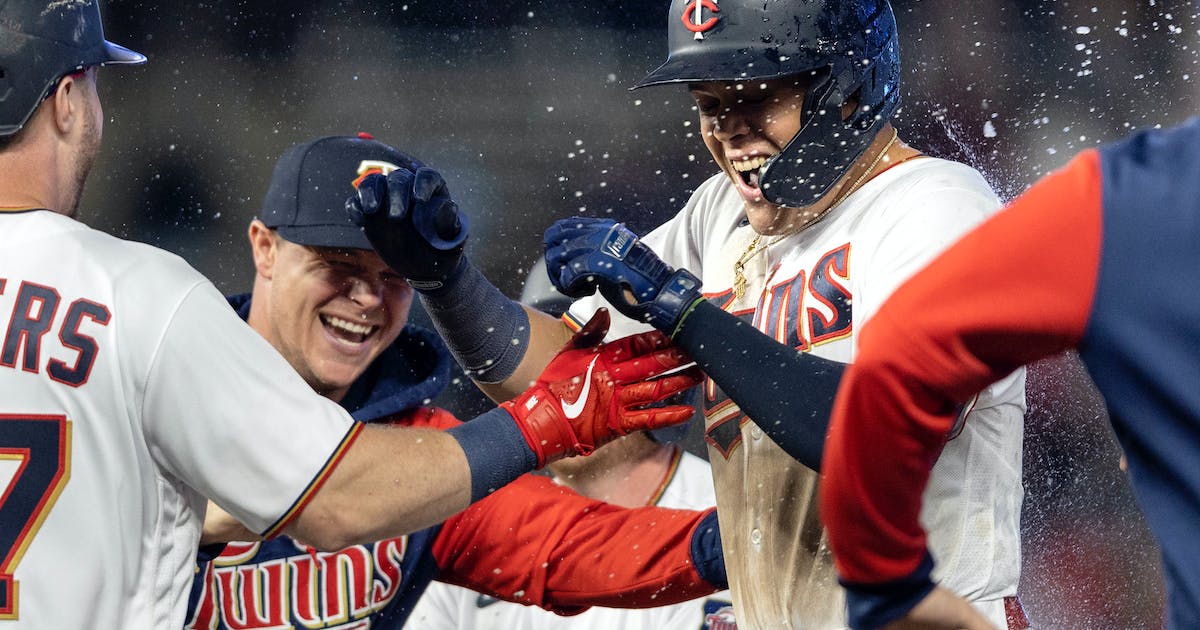 After the Twins beat Detroit 5-4 on Monday night in walkoff fashion, the fifth consecutive victory for the AL Central leaders, the Target Field clubhouse sounded unexpectedly like a middle school band practice.

The cacophony of thumping music from the stereo combined with hoots and chatter from the players. And every now and then, a loud honk from a horn or the ringing reverberations from a gong would break through the din.

“We just added that,” Max Kepler said of the instruments. “Just to celebrate. Because we’ve been winning so much, so we want to enhance the experience a little.”

Yes, the Twins — who are 26-16, 4½ games ahead of the rest of the division — are so used to winning these days, they need a gong from the Himalayas (per Kepler) and vuvuzelas per the 2010 FIFA World Cup to keep the W’s from becoming rote.

Perhaps the anticipation of the impromptu postgame concert was what fueled the Twins to a somewhat unlikely victory. Kepler — who has come on in the past nine games, batting .396 — hit a grand slam in the first inning to put the Twins up 4-0, the team’s 1,000th regular-season home run at Target Field. But Detroit steadily eroded that lead, scoring a run off starter Chris Archer, two off reliever Griffin Jax and the first earned run of the season off Joe Smith to tie the score. In turn, the Twins offense cooled, with the only two hits from the second through the eighth inning coming from the on-fire Luis Arraez.

Yet just as the opening slam was, the Twins put together another display of teamwork to take the game in the ninth. Kepler walked against lefthander Andrew Chafin. Lefty killer Kyle Garlick pinch hit and singled to put runners on first and third. One out later, Gio Urshela rolled a ground ball to Detroit shortstop Javier Baez, who watched as the ball trickled out of his glove while the winning run scored — the second day in a row Urshela drove in Kepler with a winning single in the ninth inning, after the Twins came back from six runs down to win at Kansas City 7-6 on Sunday.

Even though Kepler was a key part of Monday’s victory, he wanted to emphasize the Twins’ ensemble rather than any soloist. Kepler said the reason he’s performing well and why the team is so successful — especially coming off an abysmal last-place 2021 — has to do with the people in the clubhouse and the vibe they have generated.

“I just feel like there’s less pressure on each player at the plate,” Kepler said. “It’s just a good group of guys. So it’s like we’re fighting for each other.”

That wasn’t just evident at the plate. After Jax and Smith both had uncharacteristic tough innings, the final two pitchers out of the bullpen quieted the ruckus. Caleb Thielbar came in after Smith in the seventh, inheriting a one-out situation with runners on first and third and the score tied 4-4, and ended the inning swiftly.

Emilio Pagan then pitched a clean final two innings, giving up only one hit, and earned his first victory in a Twins uniform.

“Really, nothing we did came super easy. They kept chipping away at us, had some really good at-bats to get back in the game, and that made it even more difficult,” manager Rocco Baldelli said. “So there was a lot of funkiness going on on our end. We had to think through a lot of different things.”

Kepler said many of the situations the Twins have been in this year — like Sunday’s late rally and Monday’s tight game — are familiar. The difference from 2021, though, comes down to camaraderie.

“The people are interested in each other,” Kepler said. “More so than last year. It felt more disconnected, an individual thing.”

As Kepler said that postgame in front of his locker, the gong sounded in the background. The tone wasn’t quite right, though, more like the clash of cymbals than a gentle wave. Kepler shouted some instructions — strike it in the center, a light touch is best — which helped elicit the perfect hit and a harmonious song.

Kepler said the gong has some spiritual airs at work. Maybe that’s what is making the Twins so in tune.