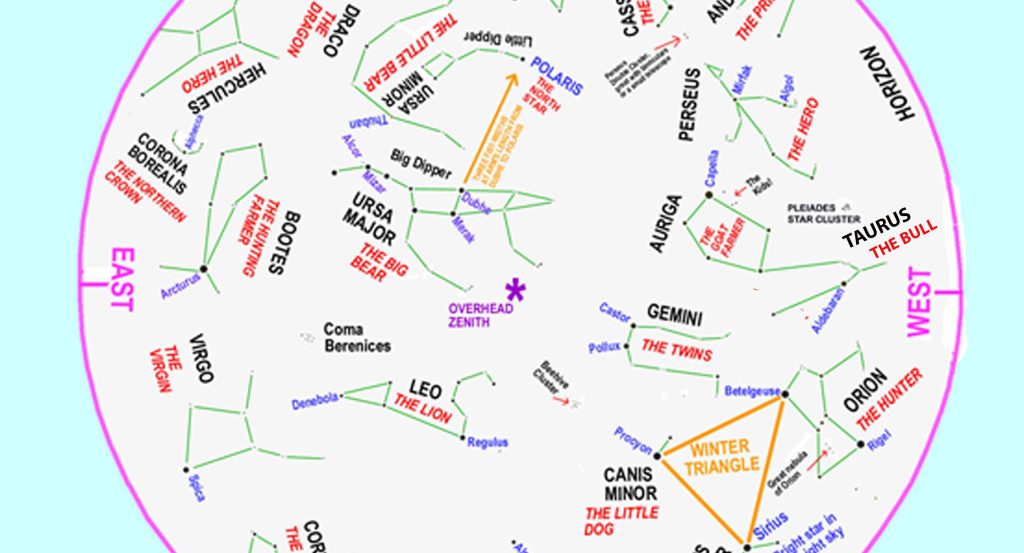 April is truly a month of transition. Nights are shorter and you have to stay up later to begin your stargazing, but the trade-off is that the nights are getting warmer. April is also the month that the constellations of winter make their last great stand in the western sky while spring — and even summer — constellations are on the rise in the east.

The mighty winter constellation Orion the Hunter and his surrounding posse of bright stars and constellations are on their farewell tour in April. Early in the month, Orion and his gang appear after evening twilight in the west, but as the month continues, they start the evenings closer and closer to the horizon. As it orbits the sun, Earth is gradually turning away from the direction in space occupied by the great constellations of winter. After April, Orion will not be seen again in the evening until late autumn.

April is your last chance for evening telescope viewing of the fabulous Orion Nebula, also known astronomically as M42 until late next fall. Even with smaller telescopes M42 is great! It’s one the best emission nebulae in the night sky, over 1,400 light-years away. If possible, view it in darker skies. It has an eye catching three-dimensional greenish glow to it. Emission nebulae are huge clouds of hydrogen gas that give birth to new stars. In the Orion nebula you can easily see a tight trapezoid of newborn stars within it.

The spring constellation Leo the Lion appears to be chasing Orion out of the sky. Look high in the southeastern evening sky for a distinct backward question mark of stars. That question mark outlines the celestial lion’s heart, chest, and head. Leo’s brightest star, Regulus, marks the heart of the lion at the bottom of the question mark. A small but distinct triangle makes up the lion’s rear and tail to the lower left of the question mark.

In the northern sky, you’ll easily spot the upside-down Big Dipper very high in the heavens. Although many people think the Big Dipper is a constellation, it is not. Instead, that shape is the brightest part of the very large constellation Ursa Major, the Big Bear. The Big Dipper outlines the rear end and extended tail of the bear.

To find Polaris, the North Star, use the “pointer stars” on the side of the Big Dipper’s pot, opposite the handle. Polaris is about three fist-widths at arm’s length from the pointer stars. The North Star lies at the end of the handle of the much dimmer Little Dipper, more formally known as Ursa Minor, the Little Bear. Polaris is an important star in our sky because it shines directly above Earth’s north pole. As Earth rotates on its axis, all of the other stars revolve around it every 24 hours.

With your mind’s eye, extend the arc made by the Big Dipper’s handle beyond the end of the handle, and you’ll run into a super-bright orange-tinged star in the eastern sky. That’s Arcturus, the fourth-brightest star in the night sky and the brightest star in the constellation Bootes the Herdsman. Bootes, however, looks much more like a kite rising on its side with Arcturus at the tail. Keep extending that arc from the Big Dipper’s handle, and you’ll eventually run into the bright star Spica.

If you want to do some decent early-evening planet-gazing this month, I’m afraid you’re out of luck. Planet-gazing in April is exclusively an early morning pre-twilight show this month. Look for Venus, Saturn, and Mars in the very low east-southeast, rising less than an hour before morning twilight begins. In mid-April, Jupiter will join the fray. Venus is by far the brightest of the four. Despite its brilliance, Venus is not a very good telescope target because of the strong blurring effect of Earth’s atmosphere close to the horizon and because Venus itself is completely cloud-shrouded. Saturn, Mars and Jupiter are way too dim and tiny to see much detail in April but as 2022 continues they’ll brighten up considerably and will be available in the early evening sky

In the meantime enjoy everything the April 2022 night skies have to offer, from sunset to sunrise.

Mike Lynch is an amateur astronomer and retired broadcast meteorologist for WCCO Radio in Minneapolis/St. Paul. He is the author of “Stars: a Month by Month Tour of the Constellations,” published by Adventure Publications and available at bookstores and adventurepublications.net. Mike is available for private star parties. You can contact him at mikewlynch@comcast.net.