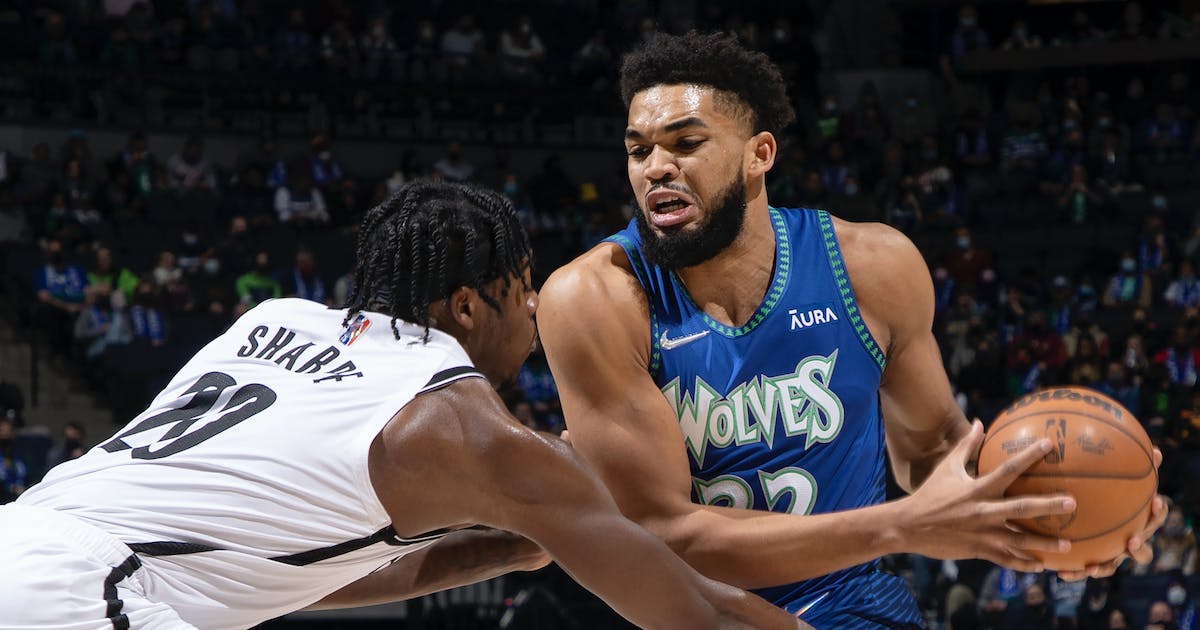 The Timberwolves kept their composure and their minds on Sunday at Target Center and delivered a 136-125 victory over Brooklyn that coach Chris Finch called a sign of growth.

On a night when star Karl-Anthony Towns went 2-for-11 and scored only eight points in the first three quarters, the Wolves bench stayed on the floor well into the fourth quarter, nurturing a lead back into double digits.

They did so against Kyrie Irving, James Harden and a Brooklyn team missing injured superstar Kevin Durant for the next month.

Irving’s 30-point night wasn’t enough for a Nets team, not on a night that Harden went 4-for-13 from the field for 13 points and the Wolves received some perfection from their bench.

Reserve forward Taurean Prince didn’t miss a shot. He went 6-for-6 from the field — including 2-for-2 on threes — for a Wolves group of reserves that outscored the Nets bench 42-38.

Prince scored 15 of those 42 points and Jaylen Nowell 16 for a bench that kept the lead until Towns finally found himself midway through the fourth quarter. His 15-point fourth quarter included 3-for-3 three-point shooting and repelled a Nets team that knocked a 15-point deficit down to only six points before Towns and Prince made consecutive threes midway through the fourth.

Afterward, Finch called the result a sign of growth for a Wolves team that survived its COVID-19 crisis around the holidays and developed from it.

“Earlier in the season, maybe KAT or myself or the other guys would have felt pressure,” Finch said. “Like, ‘Hey, let’s get KAT going.’ We never felt that. Everyone was playing and he wasn’t losing his mind because he couldn’t get himself jump-started. He played his role. He played well defensively. I thought he was really good.”

While Towns labored, starting point guard D’Angelo Russell delivered a 23-point, 10-assist game and Anthony Edwards scored 25 points before he knocked knees with a Nets player and came up limping late in the game.

“We showed everything,” Russell said. “Rebounded solid. Made our free throws. Made shots. We could have rebounded better. We followed the game plan and saw the result. This was a great win for us. We did everything we were supposed to do.”

Afterward, Finch said he expects Edwards and his knee will be fine.

Russell, Edwards and Jaden McDaniels did their part as starters, Nowell, Prince, Naz Reid and other did theirs off the bench.

“That’s the whole point,” Towns said. “It doesn’t need to be me every night. That’s why we have great talent like Ant and D-Lo. Tonight it was D-Lo’s night, leading, directing everyone. He played a complete game. Just follow on. If they needed me, I was going to be there.”

He finally was when the Wolves need to push back the Nets one last time.

“The game can’t be perfect every day, it’s never going to be,” Towns said. “The shot wasn’t falling. I’ve got to move on. I can’t be a detriment to this team. I have to be the best defender I can be. I had no doubt in the fourth quarter it was going to start clicking. Like I said in New York, superstars show up when you need them the most and I had to show up. I was confident I’d hit shots.”

The Nets, with Harden providing the fuel, pulled within 72-62 by halftime before the Wolves pushed their lead to 89-74 midway through the third quarter.

The Wolves led 100-92 in the third quarter’s final minute when LaMarcus Aldridge was called for an offensive foul after he used his left elbow to whack Towns away. Officials later upgraded the foul, Aldridge’s fifth of the game, to a flagrant 1. He fouled out on an offensive foul with seven minutes left.