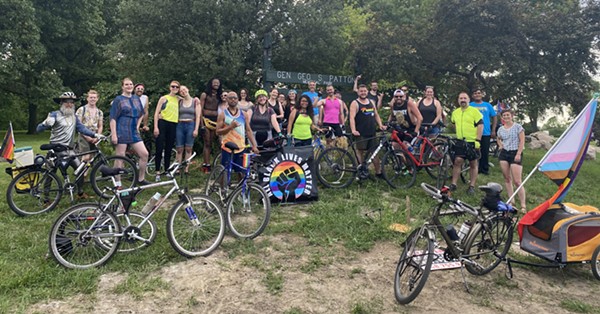 Here’s your yearly reminder that the LGBT Pride movement did not start as a party or excuse for corporations to slap rainbows on products. It began with the Stonewall Rebellion against police brutality, led by Black trans women.

The Queer Pride Detroit Bike March intends to honor those roots in a protest of the corporate hijacking of Pride on Sunday, June 12.

As an alternative to the larger Motor City Pride event, the bike march is a 15-mile bike ride from Riverside Park to downtown Detroit and back. There’s no sponsorship from corporations who don’t give a damn about queer people outside the month of June, and no police.

“Stonewall was a riot and we can’t and don’t want to forget that,” Queer Pride Detroit Bike March organizer Gabriela Alcazar tells Metro Times. “We want to stay true to the radical birth of Pride and make sure we’re speaking to the issues affecting the queer community that we still need to fight for. That includes not only issues of white supremacy, but police brutality and even… how ICE affects queers who are undocumented. ”

The Queer Pride Bike March was started three years ago in reaction to a group of Neo-Nazis who showed up with police escorts to protest Motor City Pride in 2019.

“Not only were they escorted by the Detroit police, the organizers of Motor City Pride did not do anything to address it,” she says. “They were basically just working with police … It didn’t feel like the police were actually there to protect the visibility of queer folks coming to Pride, it was to protect the Neo-Nazis.”

Alcazar says an ideal Pride celebration is one that “has a critical lens on not just the white supremacist threat to POC in the queer community but also our inactions with capitalism and the tokenization of people in our communities from these big companies.”

In past years the bike march has drawn anywhere from 70 to 200 people. Alcazar says the group partners with small local businesses that support queer communities year-round to provide water and snacks for the riders.

“We’ll just be a bunch of queers joyfully riding our bikes around. We encourage people to bring their flags and signs of whatever messages they want to share and there will be plenty of music through people’s amazing, rigged-out bikes.”

The third annual Queer Pride Detroit Bike March will meet on Sunday, June 12 at 11 a.m. at Riverside Park at W. Jefferson and 23rd St. in Detroit.