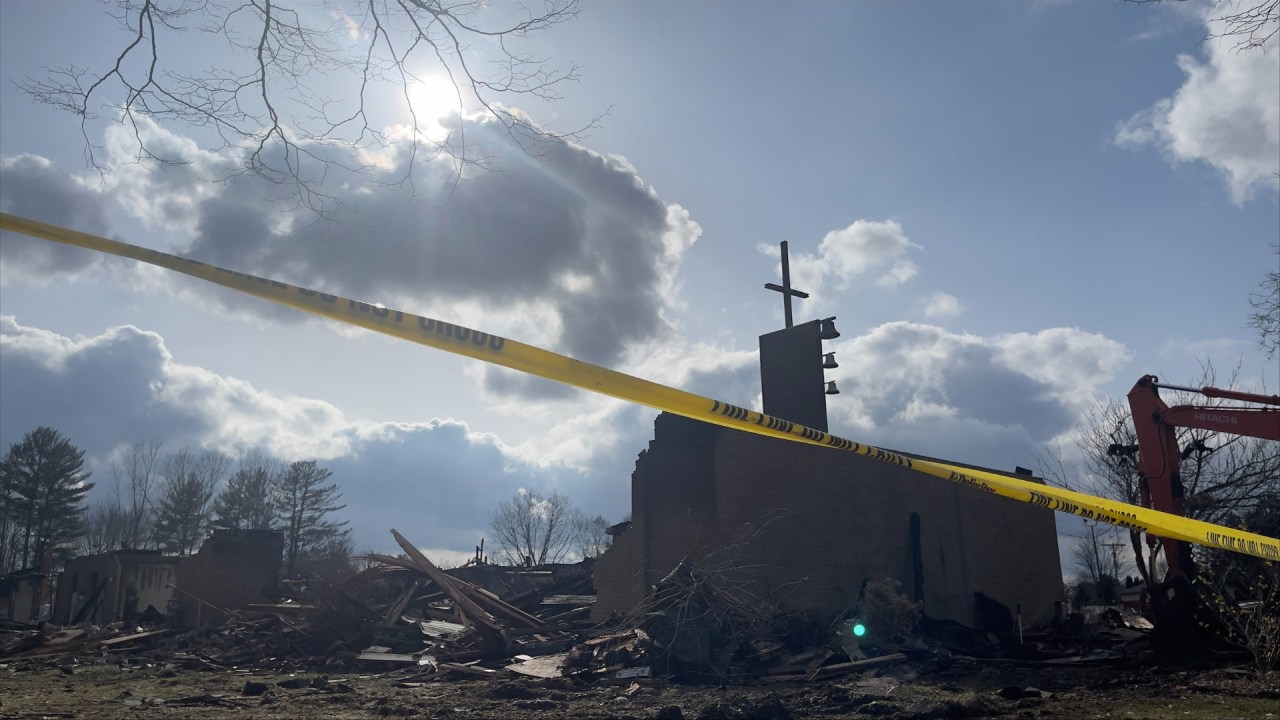 RAVENNA TOWNSHIP, Mich. (WOOD) — The building was a total loss, but the cross is still standing after a fire broke out at First Reformed Church of Ravenna.

“I got here at 8:30 in the morning … and the one thing that was still standing was the cross, everything else was gone,” Pastor Stephen VanderWoude said.

Multiple fire departments responded to the church on Mortimer Street near Main Street in Ravenna Township around 4:45 Saturday afternoon.

“The beauty about this community of Ravenna is that in times of crisis, everybody turns out. There were 17 fire departments here working this fire,” VanderWoude said.

Firefighters left the scene late Sunday morning. VanderWoude and other church members spent the afternoon looking at the devastation.

“Every square inch of the building had a purpose,” Youth Director Paul Wetmore said.

Inside the church was a sanctuary, youth basketball gym, donation closet and other rooms and offices.

Through the busted-out windows, shoes and clothes from the donation closet can be seen ruined from the flames.

“God’s Closet was where we would have donations of clothing come in and anybody in need would be able to come in and pick out as much clothing as they possibly needed,” Wetmore said.

As the building burned into the late hours Saturday, firefighters escorted church leaders into the building to retrieve baptism records and a few sacred mementos.

“I go running back in and then I realized that my father’s communion cup chalice that he used as a pastor when he led communion … was sitting there on my shelf,” VanderWoude said.

VanderWoude was able to save the chalice along with his father’s diary and cross.

Longtime church members were devastated by what little was left, remembering when the church moved to the new building in 1964.

“We’ve seen six or seven pastors come and go over the years and there’s good friends and families here,” Dale Johnson said. “Our daughter was married here and she’s 53.”

With their sadness, comes hope.

“God has a plan for us (at) the First Church. The cross is still standing,” Johnson said.

As fire investigators work to determine what caused the flames, the congregation is looking toward the future.

“We are for sure rebuilding, and we are going to be here for this community no matter what,” Wetmore said.