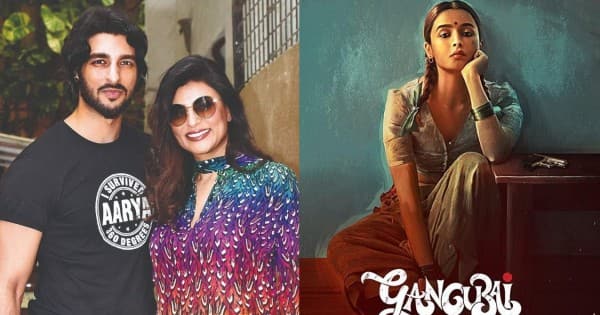 The world of entertainment has been very exciting today and we bring you a wrap of all the trending entertainment news of the day. Bollywood actor Nawazuddin Siddiqui becomes a proud owner of a dream home in Mumbai, is it OVER for Ibrahim Ali Khan and Palak Tiwari?, Sophie Choudry croons Allu Arjun, Samantha Ruth Prabhu’s Oo Antava, Ex lovers Sushmita Sen and Rohman Shawl meet after their separation, Alia Bhatt’s film Gangubai Kathiawadi gets a new release date and more. Here’s a look at the top trending entertainment news today that you shouldn’t miss. Also Read – Nawazuddin Siddiqui’s Nawab, Shah Rukh Khan’s Mannat and more: A look at glorious bungalows of Bollywood stars [VIEW PICS]

Is it OVER for Ibrahim Ali Khan and Palak Tiwari? Also Read – Deepika Padukone’s Gehraiyaan to Rajkummar Rao’s Badhaai Do – complete list of upcoming Bollywood movies in February

Ibrahim Ali Khan and Palak Tiwari’s last meet video went viral on the social media, wherein the actress was hiding her face while Ibrahim was all cool and composed. A source close to BollywoodLife informs, “Ibrahim was not very impressed by the way Palak was hiding her face, it rather left him embarrassed. It was their first meeting in a public place and the way Palak reacted was very childish. However, Palak too was a tad bit embarrassed seeing herself as the video went viral. And after their viral spotting Palak and Ibrahim haven’t contacted each other. Well, it will be too soon to say it’s over as they were just friends but definitely had a liking for each other. But for now, they have maintained their distance.” Also Read – Hooked to Allu Arjun’s Srivalli, Saami Saami, etc? Pushpa lyricist Raqueeb Alam reveals why he finds it hard to work in Bollywood [Exclusive]

Also read: Is it OVER for Ibrahim Ali Khan and Palak Tiwari after the last viral spotting? [EXCLUSIVE]

Bollywood actor Nawazuddin Siddiqui finally got his dream home in Mumbai. A lavish bungalow that is nothing short of a palace. He took to his Instagram and gave a sneak peek to all his fans. He captioned the post as, “A Good Actor can never be a Bad Human, because it’s his inner purity that brings out the Good Act.”

Actress Sophie Choudry crooned Allu Arjun, Samantha Ruth Prabhu‘s Oo Antava song and made fans go gaga over it. She shared a video from the recording studio and wrote “I promised I’d try so this had to be done…Such an EPIC song @thisisdsppls excuse the mistakes How did I do ? @samantharuthprabhuoffl @indravathichauhan you rocked the song!” Allu Sirish, Allu Arjun’s brother commented “Woohoo!!! Awesome. On point on everything except one word.”

Sanjay Leela Bhansali‘s magnum-opus Gangubai Kathiawadi starring Alia Bhatt in the lead role is set to release on February 25, 2022. The makers of the film recently made the announcement and it also got revealed that the film will have its premiere Berlin International Film festival.

Sushmita Sen and Rohman Shawl had announced their separation a month ago and recently, the two met each other for the first time since separating. A very well-placed source close to Bollywood life revealed, “Sushmita and Rohman met for the first time (post separating) and they even travelled together in the same car from the actress’ home, where they were accompanied by one more individual who seems to be their common friend. Sush and Rohman spoke to each other for a good half hour below her building and later went to her place and waited there for a few hours. Though they are separated, Rohman shares a strong bond with Sushmita’s daughters, Renee and Alisah, and both her daughters, too, are very close to him. Rohman is almost like a father figure to them and he’ll always be there for them whenever they need him. Sushmita, too, has no qualms with this equation and is happy with their bond. The attachment that Sushmita’s girls have with Rohman and vice versa is intact and will never come to an end.”

Also Read: Ex lovers Sushmita Sen and Rohman Shawl meet for the FIRST time after their separation; here’s what we know [EXCLUSIVE]