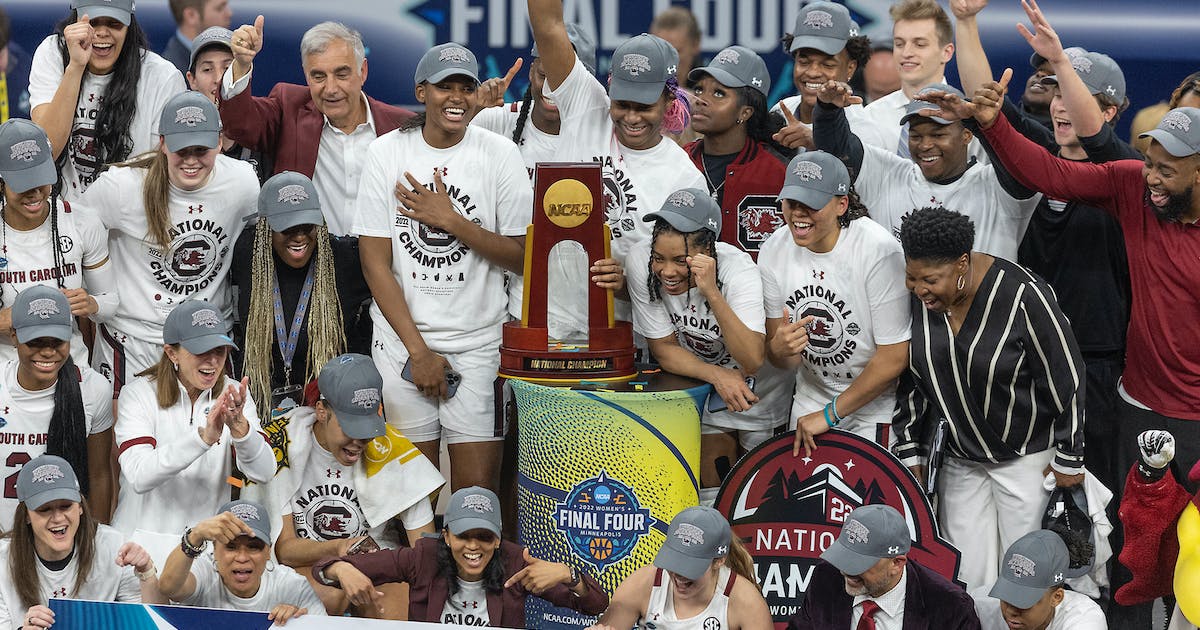 The fans behind them roared as players came off the Target Center court. Some players hugged each other. After playing the game of her life, Destanni Henderson jumped into the arms of assistant coach Fred Chmiel.

Afterward? They jumped, screamed, danced at midcourt as the confetti fell and the nets were cut down. Sunday night, the Gamecocks started the women’s basketball national championship game with a punch to the gut and ended it with a combination, leading wire-to-wire in a 64-49 victory over Connecticut in front of an announced 18,304 fans.

“UConn is not only a great team, it has a great tradition,” Staley said as her players rejoiced around her, after she became the first Black coach to win two Division I titles. “But it was divine order for us to be champions today. We weren’t going to be denied.”

No. They were a force to be reckoned with. From the start, until the end of their second national title, joining the one won in 2017. If last year’s image of the team was star forward Aliyah Boston devastated after a missed last-second shot failed to fall, this time it was of Boston, named the Final Four’s Most Outstanding Player, thrilled and smiling.

“Honestly, I’ve been thinking about it since last season,” Boston said after recording 11 points and 16 rebounds Sunday. “Because everyone had a picture of me crying. But today we’re national champions.”

Like this game, the Gamecocks (35-2) were the wire-to-wire No. 1-ranked team in the nation all season. They beat UConn for the second time this season Sunday, this time using their strength and aggressiveness.

In a game where both teams made 22 shots, South Carolina had an absurd 49-24 edge in rebounds, the second-biggest margin in the history of the championship game. Of those, 21 came on the offensive end, turned into 22 second-chance points. As Huskies coach Geno Auriemma — who lost his first title game in 12 tries — said afterward, that kind of edge leads to a lot of free throws, and it did, a 17-1 edge.

The Gamecocks were expected to dominate inside, and they did. But on the perimeter? Henderson’s 26 points were a wonder, her defense on Connecticut’s Paige Bueckers a key. The former Hopkins standout, who didn’t score until the second quarter, struggled to find shots as Henderson, with help, hounded her. Bueckers finished with 14 points, the only Huskies player in double figures.

“My teammates put me in a good position to score,” Henderson said. “They found me on the perimeter. I just let it fly.”

The Gamecocks came out swinging. They led 17-4 seven-plus minutes in. They led 22-8 after a quarter, by 18 early in the second.

This much we can say for certain: The Huskies (30-6) can take a punch. They pulled within eight at the half. Down 16 in the third quarter, they were within seven when Aaliyah Edwards hit the first basket of the fourth quarter.

But Henderson scored the next four points, then soon had four more to put the lead at 16. It was the final blow.

It wasn’t easy. Staley admitted she felt the pressure to win, it mounting as the season went on. She said she felt pressure, as a Black coach, to win a game most expected her to win.

Well, she did, even when UConn made a push.

“Our players were resilient,” she said. “We didn’t want to lose this so close to being national champions. They kicked it into another gear.”