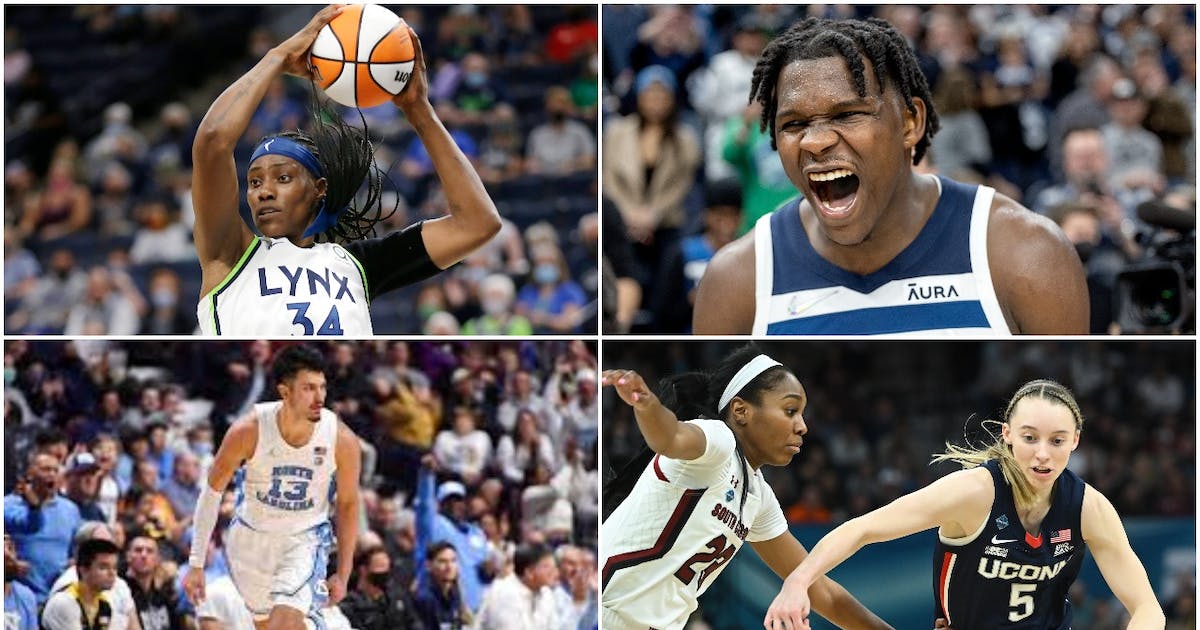 Minneapolis, being located in Minnesota, is a Vikings town, win, lose or choke.

Minneapolis is a fair-weather baseball town in a state that doesn’t experience a lot of fair weather. Or playoff wins.

Minneapolis has largely ceded hockey to St. Paul and the suburbs.

What has always been clear is that Minneapolis was and should be a basketball city, an ideal host for the city game.

Today, this week and for the past month, Minneapolis has again become just that.

The rise of the Timberwolves has led to tarp-stripping sellouts for their upcoming home playoff games against the Memphis Grizzlies.

They won their playoff opener, 130-117 in Memphis on Saturday, and won in just the right way — a dramatic, high-scoring affair highlighting three of the best young players in the league: Anthony Edwards, Karl-Anthony Towns and Jaden McDaniels.

After decades of angst, Timberwolves fans are getting to enjoy the sweetest aspect of fandom: watching young talent bloom.

The Wolves have sold out Games 3 and 4 of the series, on Thursday and Saturday at Target Center, and will be certain to sell out any home games as long as their playoffs last.

Anthony Edwards’ talent and joyous play is being discovered by the national media.

Towns is shedding his reputation as a statistical accumulator who can’t win.

Chris Finch is becoming that coach who should have been considered for coach of the year honors.

The Timberwolves are no longer a running joke.

As he prepares to finalize the sale of his franchises, Timberwolves and Lynx owner Glen Taylor finally has what he must have always wanted: one basketball facility housing two well-run teams.

The Lynx have started their training camp, a reminder that they have been the best franchise in town for a dozen years. They should, this season, extend their WNBA record of consecutive playoff seasons to 11.

They will also spend the summer celebrating the final season for center Sylvia Fowles, one of the best players in league history.

The Wolves’ surge is following hard upon Minneapolis selling out both sessions of the women’s Final Four, and hosting practices for Team USA, which is coached by Lynx coach and general manager Cheryl Reeve.

That Final Four featured UConn star Paige Bueckers of Hopkins, who grew up with a poster of Gophers coach and former star Lindsay Whalen on her bedroom wall and is symbolic of Minnesota’s prep talent boom.

During the Final Four, Whalen, the greatest basketball player in Minnesota history, was informed that she will be inducted into the national Basketball Hall of Fame.

LSU will honor former Lynx star Seimone Augustus with a statue outside of their arena, to go with those honoring Pete Maravich, Bob Pettit and Shaquille O’Neal. There should probably be statues of all the Lynx greats somewhere around Target Center.

Gophers coach Ben Johnson on Monday landed former Prior Lake star Dawson Garcia, who is leaving North Carolina via the transfer portal. Garcia becomes one of the best prospects ever to sign with the Gophers, and would join Jamison Battle, a star Johnson landed in the transfer portal last year.

Whalen’s team has been damaged by the transfer portal, but she landed former Minnesota prospect Destinee Oberg, a transfer from Arkansas, on Monday and is months away from welcoming the best recruiting class in Gophers basketball history. The class includes Battle’s sister, Amaya.

The Wolves’ long dormancy allowed Minneapolis to be viewed as a poor place to base a basketball team. This season has provided a reminder that Wolves fans merely were waiting for something worthy of their cheers.

This edition of the Timberwolves is talented, likable, deep, well-coached and relentlessly entertaining. They also have a chance to beat a No. 2 seed in a playoff series.

Basketball again is the talk of our town, and the conversation is good.