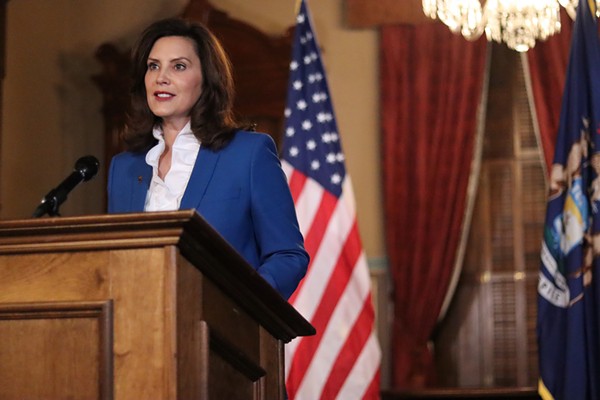 Republican gubernatorial candidate Garrett Soldano shared a conspiracy theory Thursday that Gov. Gretchen Whitmer plotted with the FBI to “fake her own kidnapping” in an effort to have a “direct impact on the 2020 election results” after two suspects were found not guilty last week.

“Michiganders deserve an answer. As we all saw last week, the FBI conceived a plot to kidnap Gretchen Whitmer and preyed on Michiganders to push it along,” Soldano said in press release, without providing evidence. “Did Gretchen Whitmer play a role in these targeted efforts to influence the 2020 election? Was Gretchen Whitmer working with the FBI to fake her own kidnapping?”

Last week, a jury acquitted Daniel Harris and Brandon Caserta, who were accused of conspiring to kidnap Whitmer. The jury did not reach a verdict on Adam Fox and Barry Croft Jr. and they can be retried. Two other defendants, Ty Garbin and Kaleb Franks, have pleaded guilty as part of a deal.

Soldano is the latest of several Republican candidates for various offices to argue that the plot was “politicized” or to share conspiracy theories about it.

GOP state House candidate Robert Regan posted on Facebook that “everyone who has followed this story from the start knew this was fabricated by the tyrant in Lansing.”

Regan will face Democrat Carol Glanville in the special general election on May 3.

Matt DePerno, a Republican candidate for attorney general, reacted to the verdict by tweeting that he predicted the “Whitmer kidnapping sham was entrapment by the FBI designed to create a false narrative before the election” and sharing a cartoon showing the FBI creating the kidnapping plot and Whitmer surrounded by a fake fire.

DePerno is facing former House Speaker Tom Leonard and state Rep. Ryan Berman (R-Commerce Twp.) in the Republican primary for attorney general. A nominee will be selected at the statewide endorsement convention April 23 in Grand Rapids, who will then go on to face incumbent Democratic Attorney General Dana Nessel in the November general election.

Whitmer’s office responded to the verdict with a warning about the precedent it sets.

“Today, Michiganders and Americans — especially our children — are living through the normalization of political violence. The plot to kidnap and kill a governor may seem like an anomaly,” said JoAnne Hulls, Whitmer’s chief-of-staff. “But we must be honest about what it really is: the result of violent, divisive rhetoric that is all too common across our country. There must be accountability and consequences for those who commit heinous crimes. Without accountability, extremists will be emboldened.”

Originally published April 15, 2022 on Michigan Advance. It is shared here with permission.