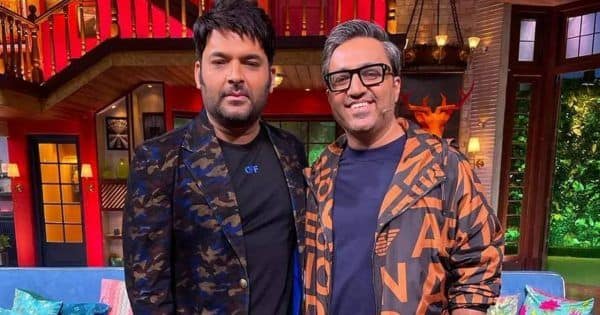 The Kapil Sharma Show has always been a great platform for all and sundry to promote their work on. Recently, Shark Tank India has surged ahead as quite a successful show. So, in order to celebrate its success, promote it further and also unravel the candid side of the ‘sharks’, Sony TV, which telecasts both TV shows, got the sharks on Kapil Sharma’s super-successful flagship show, and no prizes for guessing that he extracted a totally different side of them to what we’re used to seeing on Shark Tank India. What was surprising though was one of the sharks. Ashneer Grover’s witty side and how he also managed to take host Kapil Sharma down to town in one of the segments. Also Read – Trending OTT News Today: Chiyaan Vikram’s Mahaan release date, Deepika Padukone sizzles in Gehraiyaan’s first song Doobey and more

What occurred was that Kapil Sharma inquires whether Anupam Mittal began Sagai.com before launching Shaadi.com. Coming to his fellow shark’s aid, Ashneer Grover responds,“Pehla lockdown hua toh aapka ek baby hua, dusre mein ek aur. (You had your first baby in the first lockdown and the next one in the second lockdown.) Yeh jo ‘off’ ka button (referring to the symbol on his T-Shirt) aapki wife ne yaha lagaya hai ya nasbandi kendre wale laga ke chala gaye? (Did your wife put the ‘off’ button or population control authorities placed it there),” generating racuous applause from both the audience and Archana Puran Singh, with even Kapil heartily enjoying the dig. Also Read – Kapil Sharma – I’m not done yet: Ace Comedian REVEALS the only thing he loves more than comedy and you’ll be SHOCKED

Watch the promo video of the same below:

Shark Tank India is the official Indian adaptation of the superhit American TV show, where budding entrepreneurs get an opportunity to showcase their ideas, rub shoulders with the best in the business and win a chance of a lifetime to put their ideas into fruition. Also Read – Trending TV News Today: Sidharth Shukla’s fans celebrate his journey on ITV, Shehnaaz Gill’s pictures in lehenga choli go viral and more