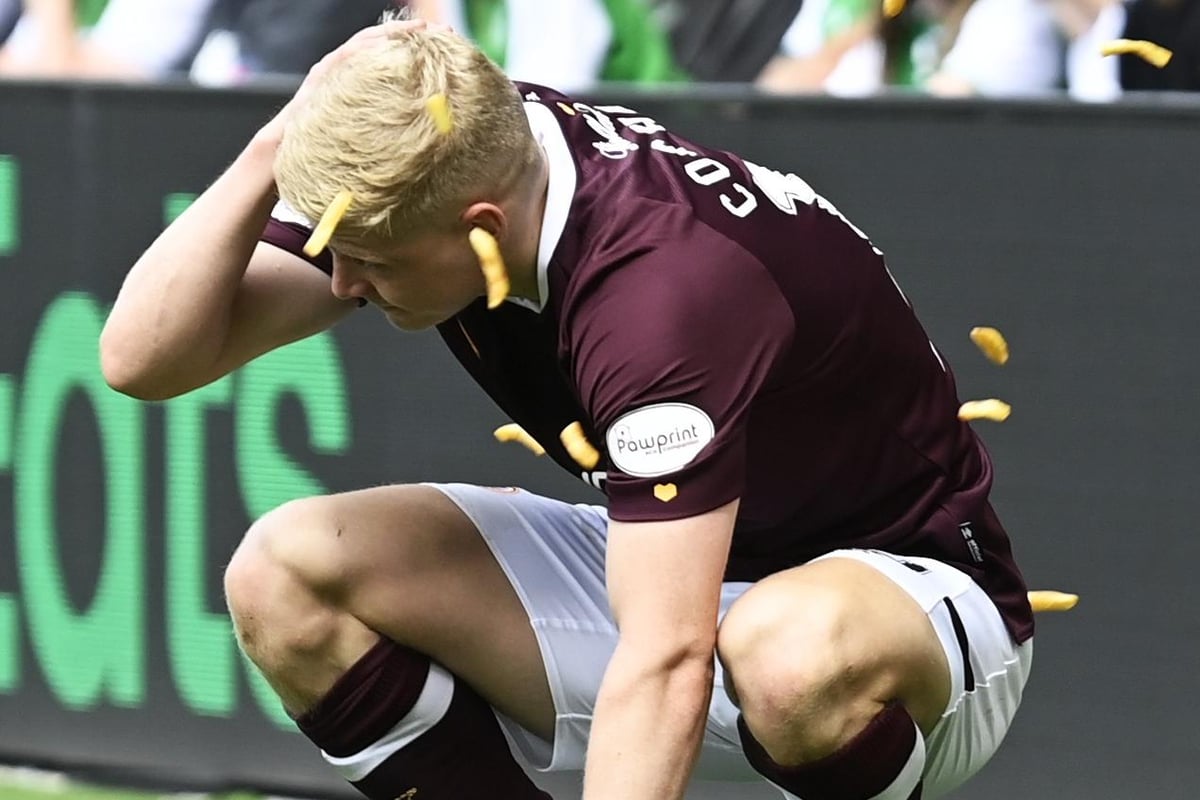 A stoppage was required two minutes into the Premiership’s first game between Livingston and Rangers after visibility became an issue due to smoke bombs.

The start of Sunday’s Edinburgh derby seemed to be held up for the same reason. A couple more pyros were hurled on after Lawrence Shankland put Hearts one up. One – tossed from his team’s own supporters remember – landed close to Gordon’s feet.

Later still, in the dying moments of the match indeed, Hibs supporters spilled onto the pitch to hail Martin Boyle’s dramatic late equaliser. They clearly hadn’t heard the warning of a football banning order that could prevent offenders from entering any ground in the country for as long as ten years that had crackled from the speakers pre-match. Or if they had, they didn’t care.

Eternal hellfire – or the possibility of a football banning order lasting up to ten years – might seem dire to many of us but it plainly isn’t enough of a deterrent.

And that is half of the problem. When it seems impossible to install technology permitting fans the luxury of actually buying a ticket online that can then be used to access a stadium, there is little chance that banning an individual from every ground in the land can be successfully implemented.

Facial recognition cameras have already been declared a non-starter by fans and the cost would be prohibitive for many clubs in any case.

Hearts defender Alex Cochrane cowers as he is struck by objects thrown from the Hibs support during Sunday’s Edinburgh derby at Easter Road. (Photo by Rob Casey / SNS Group)

Good luck with trying to monitor who gains entry. It’s maybe why those Hibs supporters who reeled across the pitch in celebration of Boyle’s equaliser did so seemingly carefree, despite knowing the game was being televised live.

Maybe now it’s time to urge TV companies to train their cameras on those who decide to invade the pitch rather than deliberately pointing them elsewhere. Expose them.

CCTV camera film is being studied this week at grounds from Leith to the Highlands, where, as reported on The Scotsman website, “at least a few dozen” were guilty of singing a song, to the tune of Abba’s Super Trouper, celebrating the deaths of several Rangers legends, Walter Smith and Andy Goram included.

A flare is removed from the pitch during the Edinburgh derby between Hibs and Hearts at Easter Road on Sunday. (Photo by Rob Casey / SNS Group)

The Hibs statement released shortly after the end of Sunday’s Edinburgh derby did not seem particularly optimistic about the likelihood of anyone being censured.

“These incidents will be reviewed again on the stadium CCTV and if an incident can be detected and someone identified appropriate action will be taken by the club,” was one paragraph.

Hearts manager Robbie Neilson had a point afterwards when he stressed that that there was too much responsibility placed on stewards who are expected to patrol 400-500 people. What can they do to prevent a player being pelted by chips – or, indeed, lighters?

There might be a will, but there doesn’t seem to be a way at the current time of writing.

And as we know, strict liability is never going to be introduced because of one simple reason – clubs won’t vote for it to happen.