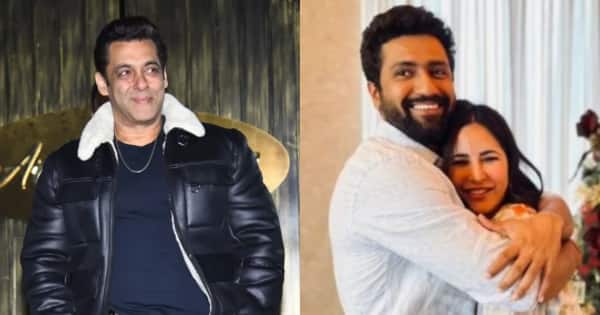 Salman Khan has congratulated Katrina Kaif on her wedding with Vicky Kaushal. Bigg Boss 15 Finale is being aired on TV right now as you read this. Just a couple of minutes ago, Nishant Bhat walked out of the house with the briefcase of Rs 10 lakh rupees. However, what caught our attention was Salman Khan’s wish for Katrina Kaif on her marriage to Vicky Kaushal. It so happened that the previous Bigg Boss seasons’ winners had joined Salman on stage. So, Shweta Tiwari (Bigg Boss 4 winner), Urvashi Dholakia (Bigg Boss 6 winner), Gauahar Khan (Bigg Boss 7 winner), Gautam Gulati (Bigg Boss 8 winner) and Rubina Dilaik (Bigg Boss 14 winner) graced the sets. Rakhi Sawant, the entertainer wanted to give challenges to the contestants. She chose Rubina Dilaik as her competitor. Also Read – Bigg Boss 15 winner: Shamita Shetty out of the race with Tejasswi Prakash, Karan Kundrra and Pratik Sehajpal in top 3?

The two ladies grooved to Katrina Kaif’s Chikni Chameli from Hrithik Roshan, Priyanka Chopra and Sanjay Dutt starrer Agneepath. Both Rubina and Rakhi set the stage on fire with their power moves. Rakhi also dragged Salman Khan to dance with them on stage. Salman joined the two ladies and grooved on Chikni Chameli wholeheartedly. As soon as the performance got over, Salman wished Katrina on her marriage to Vicky. This is the first time ever that Salman Khan has publically spoken about Katrina and Vicky’s wedding. Also Read – Bigg Boss 15 FINALE Live Updates: Nishant Bhat is out of the finale race

Coming to the previous Bigg Boss seasons’ winners, the 5 of them had a task to get one of the housemates from Tejasswi Prakash, Karan Kundrra, Shamita Shetty, Pratik Sehajpal and Nishant Bhat out with them. It was the briefcase task and one of the housemates takes the briefcase with the prize money. In the upcoming episode, we will see Shehnaaz Gill making an appearance on the show. She will also goofy up about Salman’s bond with Katrina. Salman and Katrina will be collaborating together again for the third instalment of the Tiger franchise, Tiger 3. Also Read – Bigg Boss 15: Shehnaaz Gill’s full of SWAG tribute for Sidharth Shulka includes his most famous dialogues – watch