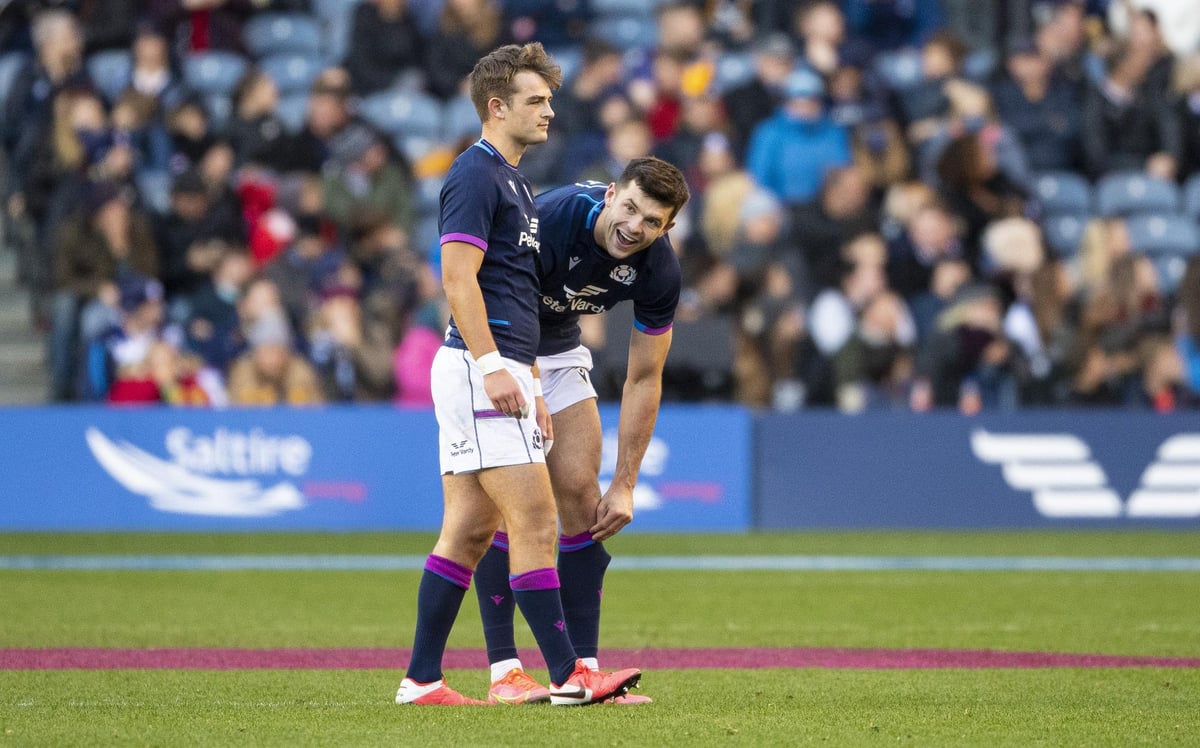 Ross Thompson has been impressed by the ability of Blair Kinghorn, right, to spot a gap. (Photo by Ross MacDonald / SNS Group)

Wilson gave the stand-off his chance, blooding him in big games during a difficult time for the club.

Thompson played in Dublin and is keen to get the game out of his system as soon as possible. He’s likely to be given the opportunity on Saturday night when Scotland take on Chile in an A international in the opening match of their first summer tour in four years.

“Danny gave me my first game so I will always be really thankful to him for that,” said Thompson from the squad’s base in Santiago. “I just have to look to do my best in the national stuff and hopefully stick my hand up for some games here. Bounce back and play some rugby. It is nice to have the opportunity to play some more and end the season on a bit more of a high.”

Wilson gave Thompson his Glasgow debut off the bench in an 1872 Cup match against Edinburgh at Murrayfield in January 2021 and then selected him for his first start in the return fixture a couple of weeks later.

This season has been more of a struggle, with Glasgow failing to build on a strong first half to the campaign.

Ross Thompson made his Scotland debut in the autumn Test against Tonga, kicking two conversions in 60-14 win. (Photo by Ross Parker / SNS Group)

His inclusion in the touring party represented a vote of confidence from Gregor Townsend and Thompson is likely to be given an opportunity against Chile ahead of the three-Test series in Argentina.

“Any time you get a chance to play – and in training as well – you try and prove you can stand up at this level and deal with the quality of international rugby. Everyone will be looking to do that regardless of how many caps you have got.

“It has been an up and down season. We started the season quite well but didn’t finish it as well as we would have liked to. It was the same for me. I didn’t think I performed as well at the end of the season so I am lucky to make amends for that and try and get some good rugby in and look on for next season.

“I have been lucky to be in the autumn Test squad and the tail end of the Six Nations and it makes me want to play more. Tests away from home against Chile and Argentina is exactly what I want to do so I am looking forward to it.”

The absence of Finn Russell and Adam Hastings from the tour squad creates opportunities for others. Blair Kinghorn finished the Six Nations in the No 10 jersey and is a stick-on to start the first Test against Argentina on July 2 but Thompson is the only other recognised stand-off in the squad and is likely to see some action against the Pumas.

“Any sort of squad you get put into it is an opportunity to stick your hand up,” said Thompson. “With Adam and Finn not being here it is more of an opportunity but I will treat these games just like I did the ones in the autumn Tests and the Six Nations. It is a good opportunity.”

Ross Thompson says he will always be grateful to Danny Wilson for giving him his chance with Glasgow Warriors. (Photo by Ross MacDonald / SNS Group)

Thompson has been impressed by Kinghorn’s transition from back three player to stand-off and knows it will be tough to dislodge him from the Test team.

“He is a great player and has a really good natural ability to spot the gap and play into space,” Thompson said of his Edinburgh rival. “His ability to beat defenders too is really good.

“I have had the chance to train beside a lot of the Glasgow boys for a while but coming into this environment it is nice to bounce off different players, players you haven’t played as much with and the exiles as well.

“It is good that there is lots of competition. It is about trying to bring that competition into training. If I get the opportunity in games for me as a ten it is more about facilitating the others and bring them into the game. That is the thing I will be trying to do.”

Thompson said Townsend and the Scotland coaching staff had remained in close contact with him throughout the season, passing on advice

“All the coaches are great,” he said. “They come into Glasgow every so often and send you clips every three or four games and I will try to sit down with a couple of the coaches and review some of the things that they think I could be doing better.

“Having that balance between both coaches at Glasgow and another set of opinions with Gregor and other coaches at Scotland here is really good to create more of an understanding. From my position it is about building up my understanding of the game as much as possible and it is just as important to take on different opinions and that helps with that.”