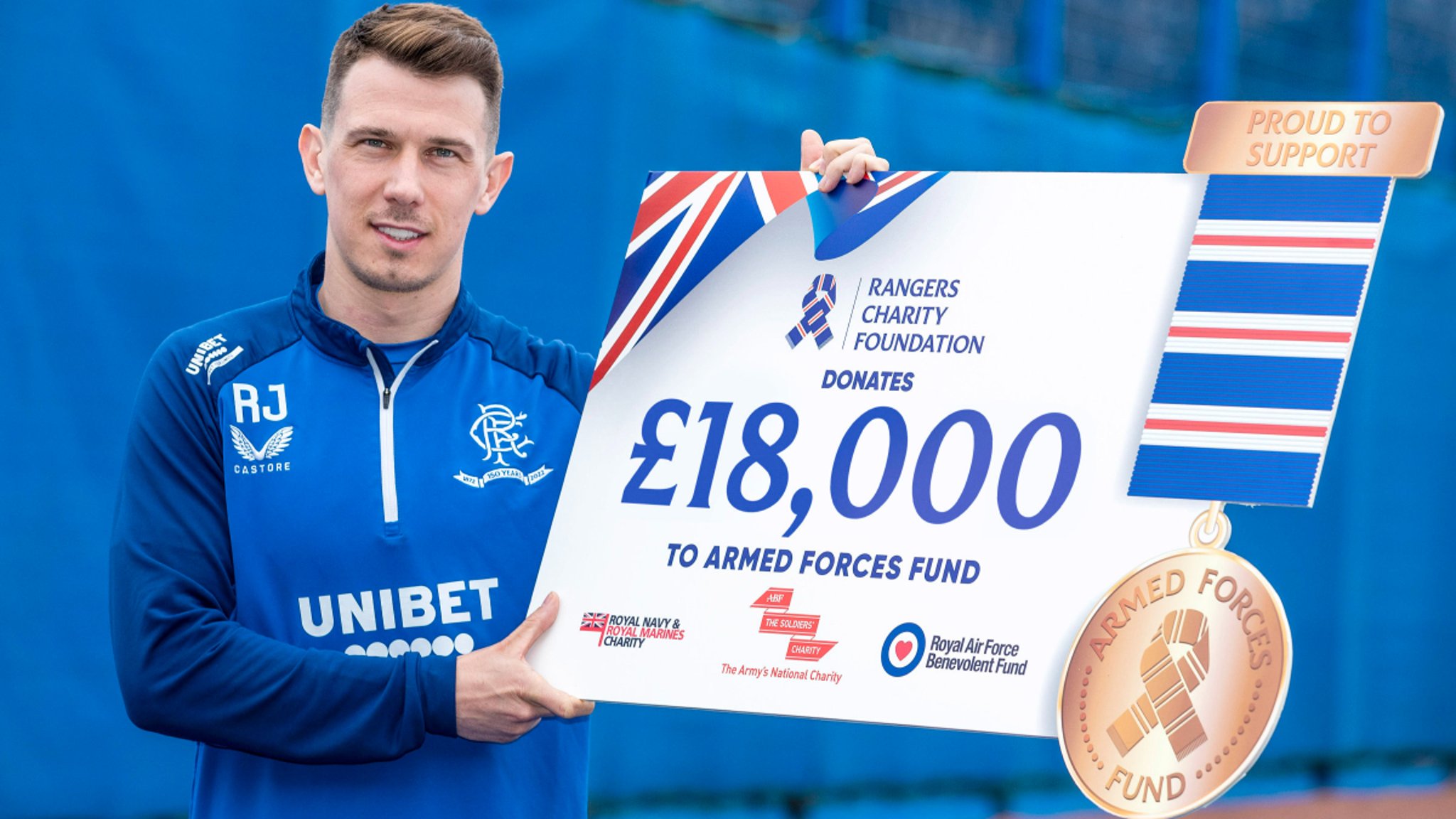 The Foundation has donated over £190,000 in cash to armed forces and veterans’ charities to date

The Rangers Charity Foundation have donated £18,000 to three services-related charities as part of their Armed Forces Partnership for season 2021/22.

The Foundation had pledged to raise £15,000 to be split among the Royal Navy and Royal Marines Charity, RAF Benevolent Fund and ABF The Soldiers’ Charity.

However, thanks to successful fundraising activity this season, including a poppy shirt auction and Armed Forces Day bucket collection, the Foundation has been able to increase that tally by a further £3,000.

The Foundation has donated over £190,000 in cash to armed forces and veterans’ charities to date, as well as providing significant in-kind support.

Director Connal Cochrane said: “We are proud to be able to make this donation to our Armed Forces partners and as always, are in awe of the generosity shown by the Rangers Family who have supported our fundraising efforts to make this possible.

“As Gold Award holders in the MOD’s Employer Recognition Scheme and with a long history of support for our Armed Services partners, it is very important to us to make a lasting difference via our Armed Forces Fund and continuing our charitable work throughout the year supporting veterans in the community and with the Club, celebrating Armed Forces Day at Ibrox .”

“Our work wouldn’t be possible without organisations like the Rangers Charity Foundation, so from all of us here at the Fund, I would like to say a heartfelt thank you.”

The Royal Navy and Royal Marines Charity is the principal charity of the Royal Navy. It supports sailors, marines and their families, for life.

”The Charity’s complete modernisation of the Drumfork Community Centre, at the heart of naval family accommodation in Helensburgh on the west coast of Scotland, was recently completed.

“Largely unchanged for 60 years, the refurbishment constituted the biggest single capital investment project ever undertaken by the Charity and coincided with the complete relocation of the Submarine Service – and therefore all of the families of Royal Navy submariners – from Plymouth to HM Naval Base Clyde.

“We very much hope that our association with the Rangers Charity Foundation will enable us to continue to support all members of the Royal Navy family in Scotland past and present and provide them with the support which their service deserves.”

ABF The Soldiers’ Charity is the Army’s national charity, here for soldiers, past and present, and their families for life.

Regional Director for Scotland, Charles Dunphie added: “Following 18 months when soldiers have provided vital support to the nation’s Covid response, I am delighted that Rangers FC and the Foundation continue to provide such staunch support to the Armed Forces in return.

“It has been great to have stood with the Royal Navy’s and Royal Air Force’s own charities as Rangers Charity Foundation partners this year.”