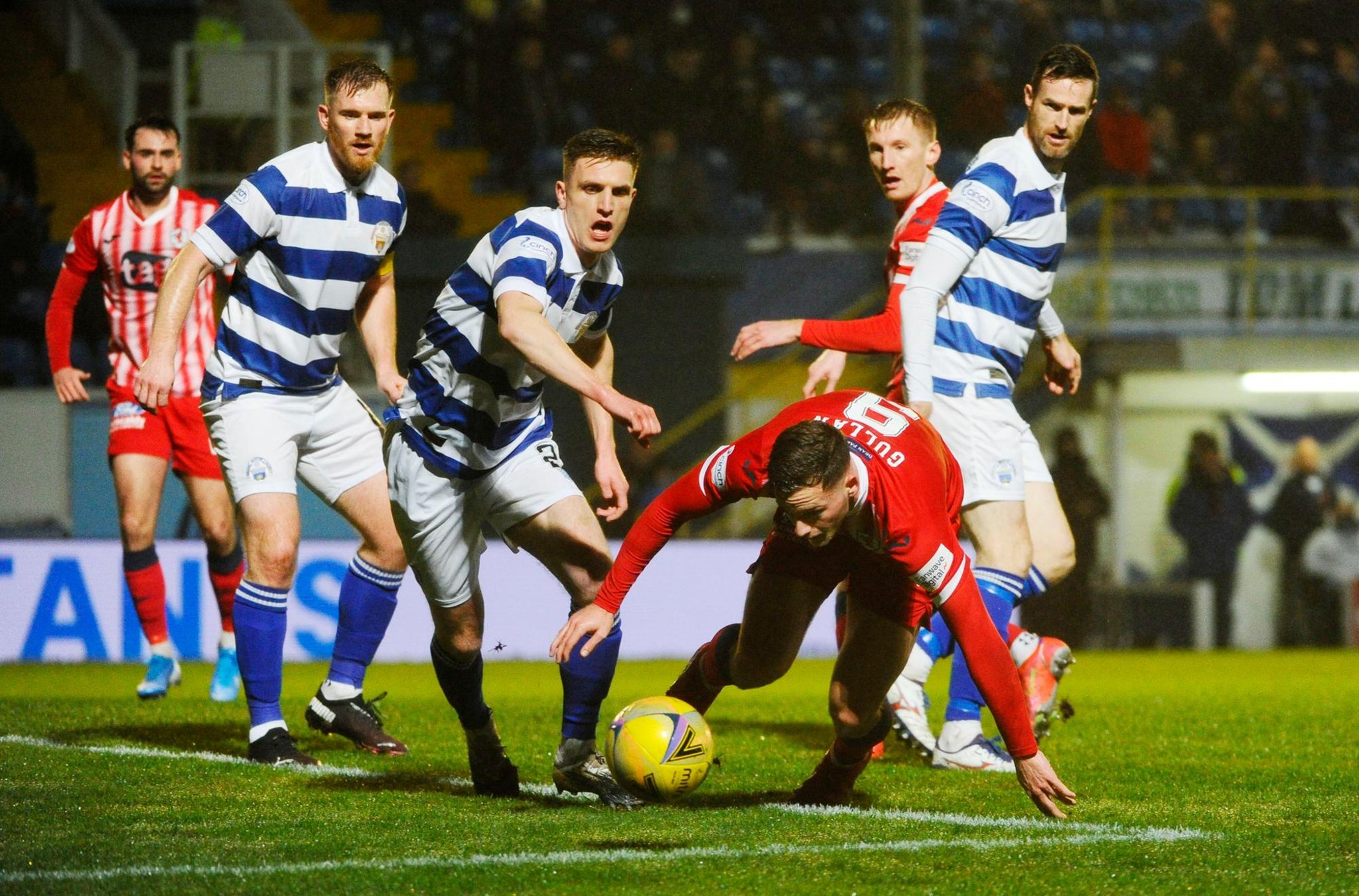 Former Raith striker Gozie Ugwu opened the scoring in the match which was televised live on BBC Scotland, before a quick double just before half time from Jamie Gullan and Reghan Tumilty put the visitors ahead.

Robbie Muirhead equalised with a second half header.

It was a well earned point for Rovers who were under the cosh for large parts of the match, but it saw their winless run in the Championship stretch to six games.

Rovers boss John McGlynn made two changes to the side which triumphed in the Scottish Cup against none-league Banks O’ Dee at the weekend.

In came defenders Reghan Tumilty and team captain Kyle Benedictus, with Tom Lang and Dario Zanatta dropping to the bench.

The match kicked off in poor conditions with rain and a swirling wind blowing around Cappielow, but it didn’t have any adverse effect on the home side who took the initiative from the start.

With Rovers struggling to get out of their own half it was Ugwu who had the first shot on goal, forcing a good save from Jamie MacDonald after six minutes.

On 14 minutes Morton could have scored when Cameron Blues headed over from close range, before an effort from Ethan Ross was blocked at the other end just 60 seconds later.

From the resultant corner Blues was involved again, clearing off the line after Brian McLean knocked the ball towards his own net.

Long throws from Lewis Strapp were causing problems for the Rovers defence and McLean went close with a header from one, before they took the lead shortly after.

It was a rare error from keeper MacDonald, spilling a McLean shot into the path of Ugwu who made no mistake on 24 minutes.

12 minutes later, despite having been second best throughout, Rovers came within a whisker of grabbing an unlikely equaliser.

Tumilty put a great ball across the face of the home side’s goal and a sliding Liam Dick was centimetres away from connecting with it.

A superb curling shot from Sam Stanton meant Jack Hamilton had to be alert to make a good save, before the same player was pulled down in the Morton box by Michael Ledger to give Raith a lifeline.

Jamie Gullan made no mistake from the spot for his first goal since signing from Hibs earlier this month.

It looked like Raith would go in at half time deserving of huge credit for fighting back having looked completely out of the game earlier, but the Kirkcaldy side weren’t quite finished.

Right back Tumilty picked up a loose ball and scored to put the visitors 2-1 ahead, though Hamilton should have done better with the shot which squirmed through his hands.

Stanton had an effort on goal from outside the box on 54 minutes but pulled it wide, with Reece Lyon going close with a great strike from a direct free kick at the other end shortly after.

Morton’s Gary Oliver had the ball in the net but it was correctly called offside as ‘Ton pushed for an equaliser.

Dick went close with another far post attempt from a Gullan cross, but this time couldn’t get a clean connection, Gullan then forced a good save from Hamilton with a low drive which was heading goalward, but it was the home side who would get the next goal.

With just over 15 minutes remaining Morton sub Robbie Muirhead glanced in a header from an excellent cross from Strapp.

Shortly after, Raith were lucky to not have a penalty given against them when Benedictus handled in the box but referee David Dickinson failed to spot it, then Blues should have put Morton ahead but headed down and over the bar from close range.

It looked like Dougie Imrie’s side were certain to score as the battered the Raith backline, MacDonald pulled off a superb save from an audacious backheel from Ugwu with five minutes to go, with a header from Gavin Reilly almost winning it at the death but thankfully for Rovers it went just wide and they ended the match with a share of the points.