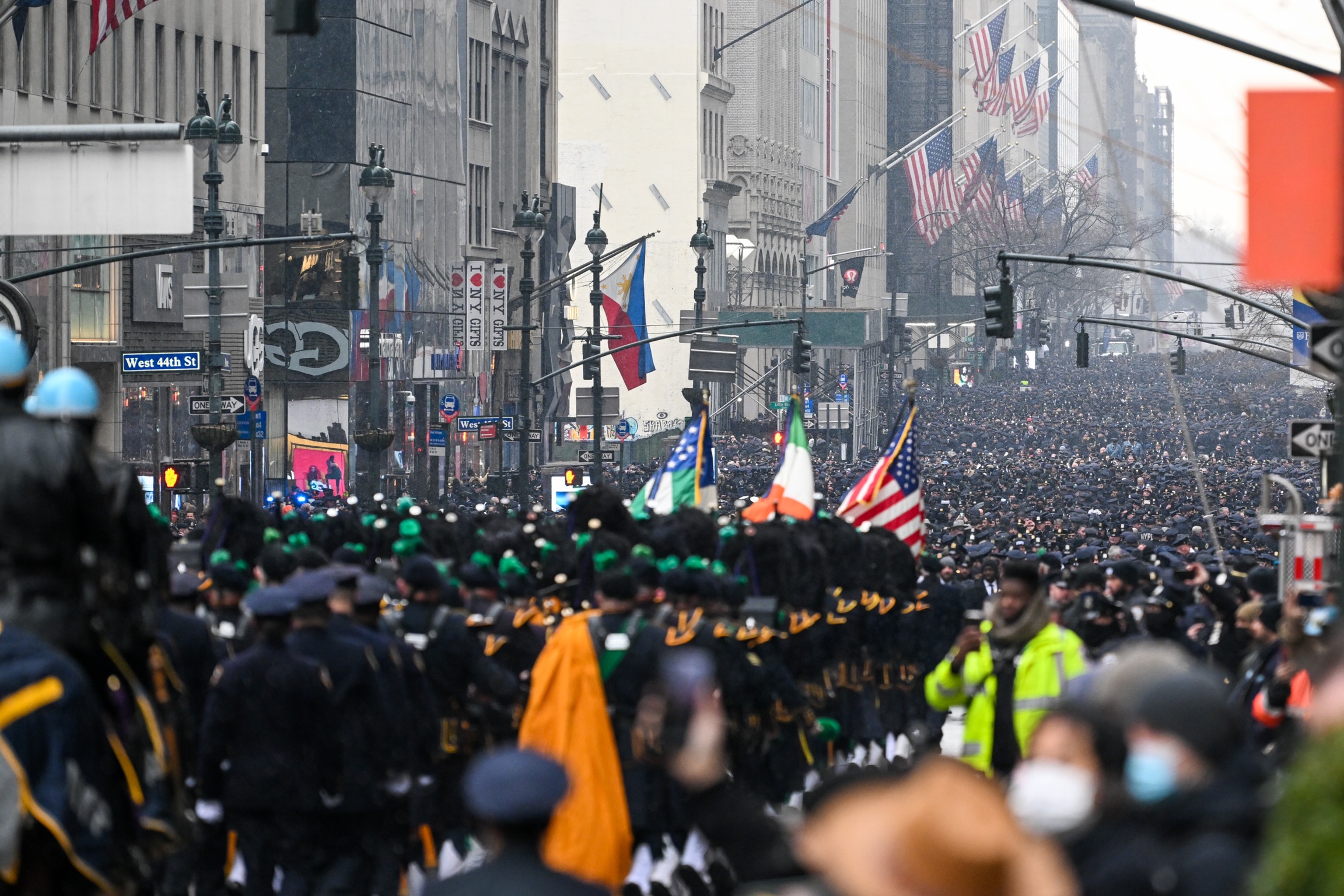 New York Police Department (NYPD) officers gathered Friday morning at a funeral for officer Jason Rivera who was shot and killed while on duty responding to a report about a domestic dispute in Harlem, New York City.

“We came together today in grief to honor our hero, now-Detective First Grade Jason Rivera. We came from near & far, standing shoulder-to-shoulder as a sea of blue,” NYPD first Deputy Commissioner Edward Caban wrote on Twitter on Friday.

His remains were escorted into the cathedral on Thursday, wrapped in a green and white NYPD flag.

Rivera was fatally shot during a situation in which a mother and a son were arguing in an apartment.

Rivera and his partner Wilbert Mora responded to the scene and were later ambushed by the woman’s 47-year-old son, LaShawn McNeil, who fired at the officers from a back bedroom. A third officer at the scene fatally shot McNeil who tried to run away. Mora died on Tuesday of his injuries, according to CBS New York.

“A sea of blue lined Fifth Avenue shoulder-to-shoulder with fellow first responders from around the country as we rendered a final salute to Detective Jason Rivera,” the NYPD said in a tweet on Friday. “With tears in our eyes we bid farewell and make a solemn vow to #NeverForget his legacy and sacrifice to this city.”

“I can’t believe I’m standing in front of thousands of people in a cathedral we planned to visit later this year,” the widow of the slain New York officer said, according to CNN. “All of this seems so unreal like I’m having one of those nightmares that you never thought you’d have.”

Luzuriaga said that she has been living a “nightmare” since she lost her husband Rivera. She also noted that she is “full of rage and anger, hurt and sad, torn.”

“Although I gained thousands of blue brothers and sisters, I’m the loneliest without you. I know you’re looking at me and beside me telling me I could do this, and I’m trying. Trust me, I am. But I didn’t prepare for this,” she added.

Similarly, Mayor Adams honored Rivera and described him as a hero during his eulogy.

“We as a city, as a state, and as a nation—we say thank you, Jason. Today our hearts are with his beautiful family,” Adams said. “He’s a hero and our fellow New Yorkers acknowledge that.”

Sewell also promoted Rivera to detective posthumously and presented his shield to his family.

Last week, the NYPD paid tribute to Rivera while officers gathered to support the officers who have been shot, while city officials including Mayor Adams denounced gun violence.

Sewell said at the time that the police department was in mourning.

“We have four times this month rushed to the scene of NYPD officers shot by violent criminals in possession of deadly, illegal guns,” Sewell said.

Mayor Adams, who was a former police officer, said at the Harlem hospital where the officers were taken last week: “it is our city against the killers.”

“Let me be clear, there are no gun manufacturers in New York City. How are we removing thousands of guns off the street and they still find a way into New York City in the hands of people who are killers?” Adams said.