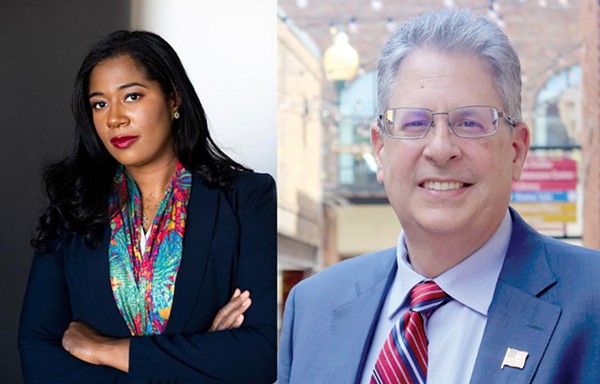 Republicans could be in trouble in Michigan because they are out of step with voters on abortion, former President Donald Trump, and conspiracy theories about the election, according to a recent poll on statewide races and Roe v. Wade.

In an EPIC-MRA poll of 600 likely voters between May 11 and 17, 63% of voters said they disagree with the Supreme Court’s draft opinion that would overturn Roe v. Wade, the landmark decision that legalized abortion.

Only 26% of voters said they support the draft decision.

Many Republican candidates, including virtually all of those running for governor, are running on a platform of opposing all forms of abortion, a position that is very unpopular in Michigan.

Of those surveyed, 57% identify as pro-choice, and 33% are opposed to abortion rights. An additional 10% are undecided.

The poll also shows that between 83% and 85% of likely voters don’t recognize the GOP picks for attorney general and secretary of state — Matt DePerno and Kristina Karamo, respectively, both of whom have echoed Trump’s lies about widespread election fraud.

The survey found that only 27% of likely voters believe Joe Biden stole the election from Trump, compared to 61% who believe Biden won fairly. About 12% are undecided.

Biden won the election in Michigan by 3 percentage points.

Of those surveyed, 54% said they view Trump unfavorably.

But the news isn’t all bad for Republicans. Biden’s ratings are also low, with 52% viewing the president unfavorably.

If the election were today, 45% of voters said they would cast a ballot for Gov. Gretchen Whitmer, and 46% said they would vote for the Republican candidate. Voters weren’t asked about specific GOP candidates.

Five of the 10 gubernatorial candidates may be disqualified after state election officials found massive fraud in their petitions to get on the ballot.

Although most voters have never heard of the Republican candidates for secretary of state and attorney general, the race could be close.

When asked if they would vote for Attorney General Dana Nessel or the Republican candidate, 43% said Nessel and 41% said the Republican. Another 16% are undecided.

Secretary of State Jocelyn Benson held a 47% to 38% advantage over the Republican candidate, with 15% undecided.

Benson and Nessel’s lead could widen after voters learn that DePerno and Karamo are opposed to abortion rights and peddle wild conspiracy theories about election fraud.