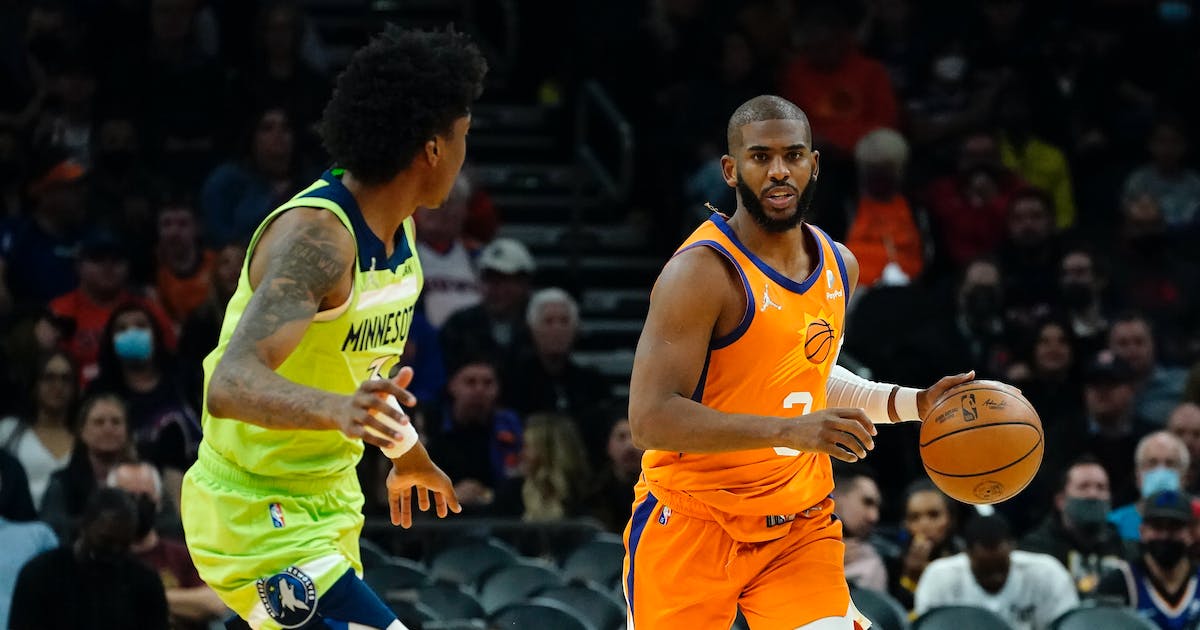 PHOENIX – These two nights, Thursday and Friday, appeared to be the two toughest of the Wolves’ season when the schedule came out.

A road game in Golden State against Stephen Curry and company on Thursday followed by another road game against the defending Western Conference champions on Friday in Phoenix.

That meant little rest and a time zone change in which the Wolves lost an hour as they tried to keep pace with two tough opponents.

As in their loss Thursday, the Wolves hung around Friday against Phoenix but ultimately lost again to a team with too much firepower 134-124. Not that the Wolves were patting themselves on the back after keeping it close in these two games.

“I hope they’re not satisfied,” coach Chris Finch said. “Surely the highlight of our season can’t be the good ol’ try.”

As the Warriors did the night before, the Suns shot the Wolves out of the gym by hitting 20 of their 39 three-point attempts.

The Wolves’ rotational, scrambling style of defense has caused issues for some teams and enabled them to be in the playoff discussion. But some of the NBA’s better offenses have taken advantage of the open looks they can get with crisp ball movement and solid shooters. The Warriors and Suns both exposed that flaw in the Wolves’ system.

“We got to get our defense back where it was for the bulk of the season,” Finch said. “It’s a little loose right now.”

Part of that may have been the nature of the schedule, center Karl-Anthony Towns said.

The Suns’ relentless attack may have had a hand in that. Point guard Chris Paul had a triple-double with 21 points, 10 rebounds and 14 assists while Devin Booker added 29 points as seven Suns hit double figures.

The Wolves made several pushes throughout the second half and were one more run from taking a lead, but at every turn Phoenix batted them back. For instance, the Wolves trailed 112-108 with 6 minutes, 48 seconds when Cameron Johnson and Landry Shamet hit threes on three straight Suns possessions to push Phoenix’s lead to 121-110.

Injuries didn’t help the Wolves’ cause with D’Angelo Russell (left shin contusion) joining Patrick Beverley as out. Jarred Vanderbilt (right midfoot sprain) was a game-time decision but ended up playing.

The absences caused a shift in the lineup and responsibilities, namely Anthony Edwards handling point guard duties for most of the night. Edwards acquitted himself well with 27 points and a career-high 10 assists.

“D-Lo is needed because I don’t like bringing the ball up the court,” the ever-blunt Edwards said. “I don’t like initiating the offense, not at all.”

Towns had 23 points while Malik Beasley had 26 a night after going 0-for-8 from three-point range against Golden State. Beasley continued his trend of up-and down performances, with Finch saying how Beasley plays on a nightly basis was all in his control.

Offense overall wasn’t the issue for the Wolves. Defense and getting consistent stops was, just as it was against Golden State. If nothing else, the Wolves learned a lesson these two nights, that their execution must be sharper if they want to contend with the best in the West.

“We have to now clean up things that we do,” Finch said. “There’s just way too many breakdowns and mental mistakes and things that we should know and know better. That’s what you have to do to beat good teams.”

The Wolves could use a day of practice, Edwards said, but the schedule hasn’t let up. Not in time or in difficulty.

“We’ve been watching film, but I think we need to have a really good practice,” Edwards said. “Like, ‘OK, we need to get back to this, this and this,’ and I think that’ll bring our foundation back to how we’re supposed to be guarding.”