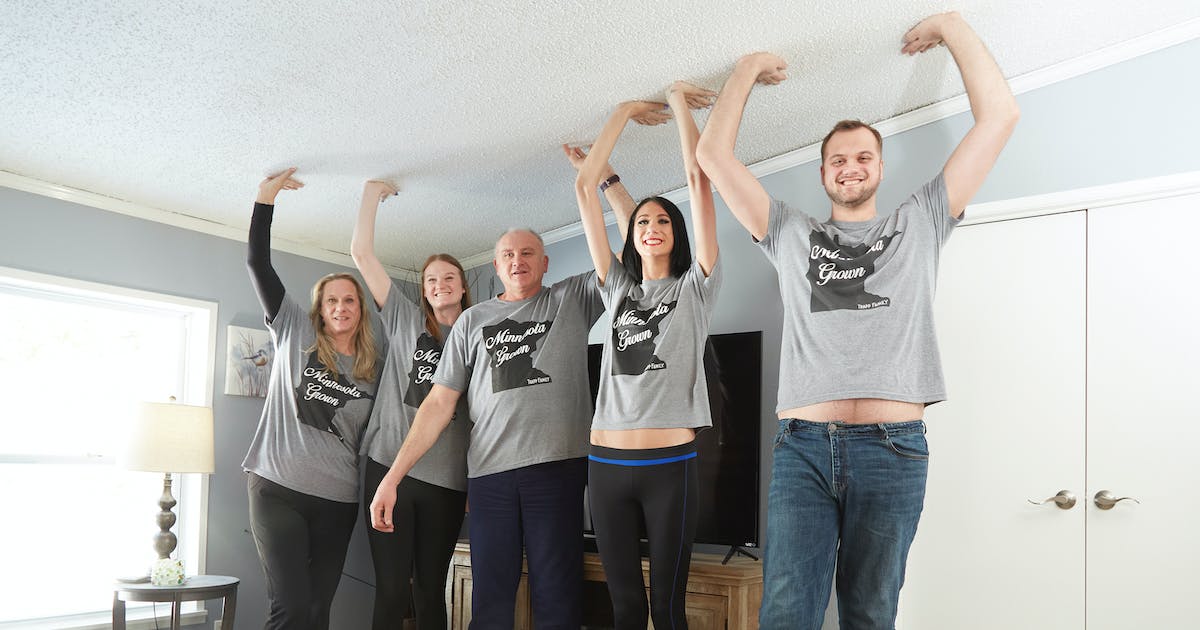 DULUTH — A northeastern Minnesota five-some whose shortest member is a comparatively slight 6 feet 3 inches has been confirmed as the tallest family in the world, Guinness World Records announced Wednesday.

The Trapp family, each seen in an official Guinness photograph easily open-palm touching a ceiling, has an average height of 6 feet 8.03 inches. The tallest is Adam Trapp at 7 foot 3 inches — a foot taller than his mother, Kristine Trapp. In between: father Scott Trapp (6-8), Savanna Trapp (6-8.1), and Molly Steede (6-6).

“I don’t feel that tall because I’m not the tallest in the family,” Kristine Trapp says in a video introducing the family. Each member is wearing a cheeky shirt that says “Minnesota Grown.”

All three Trapp kids played sports at Esko High School. Adam Trapp played basketball and intended to continue at South Dakota School of Mines & Technology in Rapid City but was sidelined with a knee injury. He will graduate with a degree in biomedical engineering in May.

“My famous line is, ‘I think my brain is going to last a lot longer than my knees,’ ” he said.

She has hit her head on doorframes, ceiling fans and lights, she said.

Steps, too, are tricky. They aren’t made for big feet, Savanna Trapp said. Fashionable shoes wouldn’t be either, if not for performers.

For Steede, a second-grade teacher in Duluth, it’s the pants that are a problem.

Adam Trapp said this all started with his sister Savanna, who had scouted out the former Guinness World Record holder — a family from the Netherlands with an average height of 6 feet 7.2 inches. She did the math and knew the Trapps could easily top them. Each member of the Trapp family was measured by a local doctor, the paperwork was submitted to Guinness, and they found out earlier this year that they had secured the title.

In mid-March, the Guinness crew visited the family in Esko, Minn., presented them with a certificate and created a short documentary on them.

Adam Trapp described the close-knit Trapp family as goofy. The kids were homeschooled until high school and most nights they ate dinner together. They enjoy campfires and old stories and playing cards.

“We always love to laugh and have a good time,” he said.

He remembered seeing Guinness World Records as a kid — the person with the most piercings or the guy who ate an airplane. He sought out the Guinness Book of World Records whenever he was in a bookstore.