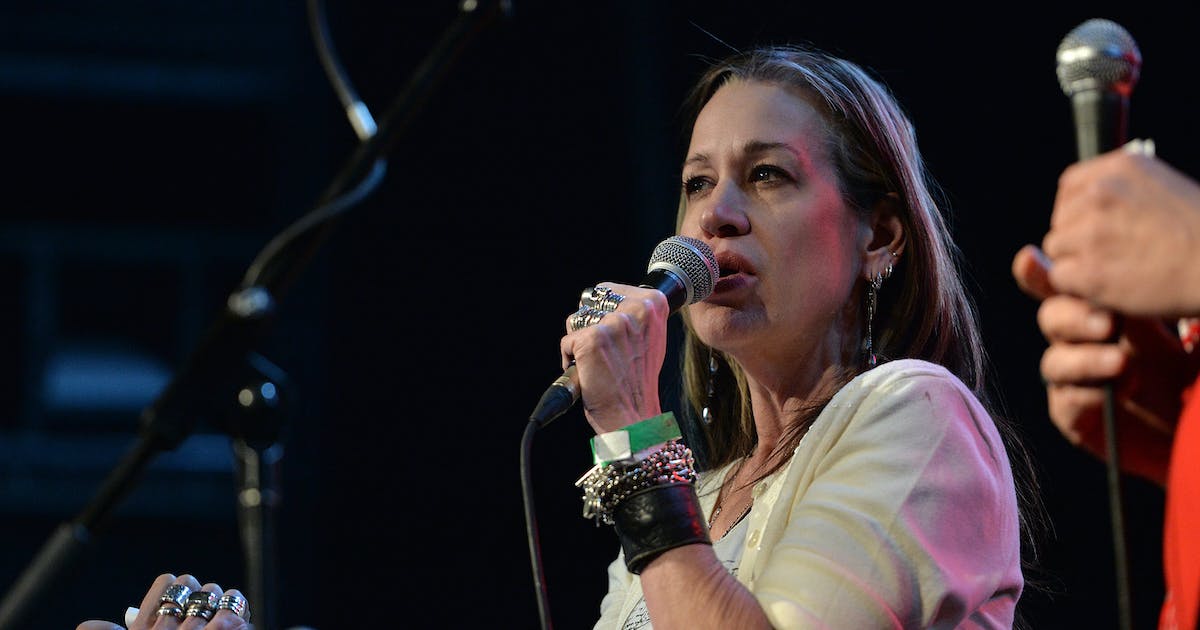 In the end, it was classic Looch: a little bit of self-deprecation and subtle snark mixed in with very un-subtle songs by the New York Dolls, Guided by Voices, Motörhead and some of the coolest rock ‘n’ rollers of all time.

Thursday’s on-air shift by Mary Lucia, however, was also laced with gratitude, uncharacteristic melancholy and — only at the very end — tears as 89.3 the Current’s flagship jockey signed off for good.

“It always amazes me how much love I have for people I don’t know,” the Twin Cities radio vet said to listeners as she also showed off her love for a wide range of music during her final four-hour afternoon shift.

The last rock DJ in town who was a bit of a rock star herself, Lucia kicked off her show with Keith Richards’ trouble-shrugging solo classic “Take It So Hard.” As Thursday also marked the sixth anniversary of Prince’s passing, she quipped, “I’m getting out before [Richards’ death] could possibly happen.”

Her shift ended to the tune of Richards, too: The Rolling Stones’ “It’s Only Rock ‘n’ Roll (But I Like It)” was her finale. Other artists she spun in between ranged from iconic and empowered women such as Dolly Parton, Mavis Staples, Cher and Etta James to unsung rock and punk pioneers such as Stiff Little Fingers, Sweet, the Dead Kennedys and T. Rex to more recent favorites such as Spoon, Kathleen Edwards, Starcrawler and Jenny Lewis.

Here and there, Lucia also dropped in songs with titles and lyrics that seemed to address the circumstances of her departure: Dave Edmunds’ “Crawling From the Wreckage,” Sam Cooke’s “A Change Is Gonna Come,” Frank Sinatra’s “My Way” and the kiss-off anthem “I.O.U.” by her brother Paul Westerberg’s band the Replacements — a family connection Lucia never mentioned on air during her 17-year tenure at the Current.

The one that really stuck out like a sore middle finger, though, was Margo Price’s “Pay Gap.”

A prominent local personality going back to her days at REV-105 during the ’90s alt-rock boom, Lucia did not share one bad word about her employer during Thursday’s shift. She did air some grievances on social media, however.

In Facebook and Instagram posts, Lucia cited the struggle for “equity and fair treatment of all of my sisters at the station” as a reason for the rather abrupt announcement Tuesday that she would exit the Current.

“I’ve been trying for years to affect positive change in the company,” she wrote, addressing the co-workers she leaves behind: “Know your worth, embrace your unique talent and voice and lift each other up.”

“I am firmly committed to creating and sustaining a diverse, inclusive and equitable environment where all employees, including women and people of color, are respected and valued,” wrote Taylor, who is former board chair of the Star Tribune and the daughter of its owner, Glen Taylor.

As overt as Price’s “Pay Gap” being directed toward her now-ex-bosses, Lucia’s exit seems to mark a calamitous bungle for the member-supported public station that should’ve been avoided at all costs.

The Current not only counted Lucia as its most visible and well-liked DJ — listeners across the cities likened her departure to losing a friend on social media — the station relies entirely on women for its marquee weekday shifts. Newcomer Ayisha Jaffer just started Monday as the 6-10 p.m. weeknight host, while Jill Riley hosts the morning show, and Jade Tittle (whom the station promoted to music director last year) serves the midday shift.

Riley is now one of only two O.G. DJs left from the Current’s 2005 inception, alongside Bill DeVille.

If Lucia’s concerns about equity aren’t addressed by the Current, and soon, the listener-supported station could sacrifice the credibility it needs to maintain with its audience. But personality is another important factor at the Current that’s taking a big hit.

While corporate FM radio stations nationwide have whittled down their on-air staffs to skeleton crews with robotic jockeys — many not even working in the city they’re aired in — Lucia led the way for the Current to be less amalgamated, more local, more personal, more rebellious and just plain entertaining. She oozed enthusiasm for the music and personality between the songs, whether discussing her pug dogs and annual trips to New York or telling funny tales about Oasis or Tom Waits or just talking about the weather in a love/hate way that was utterly Minnesotan.

Some examples Thursday: She played one of Prince’s lengthier classics, “D.M.S.R.,” not only to memorialize but also because “I’m going to develop a UTI [urinary tract infection] if I don’t go to the bathroom.” She chose the Walkmen’s urgent rocker “The Rat,” she said, “as my getaway song in case I turn to robbing liquor stores.”

As for her daily “No Apologies” selection, she spun the Eagles’ “Heartache Tonight” and cited as one she’d never played. It sounded like she was bragging.

Before handing the airwaves over to Lucia on Thursday — with Tina Turner’s “The Best” as her segue song — Tittle singled out Lucia as a mentor and hero to the younger DJs at the station.

“I keep thinking: You’re only as strong as your weakest link,” Tittle said, “but here at the Current, Mary is so good at what she does … it made all of us a little bit better.”

While continually reiterating her love for the work during Thursday’s shift, Lucia made it clear she believes her life is bound to get better after signing off. She has said off-air that she hopes to write a book or two and do voiceover work.

“It’s not terribly romantic or profound, but I’ve always said: Things work until they don’t,” she said as her time on air wound down.

Before letting the Stones serenade her out the door, Lucia ended by noting how proud she was of her work at the Current.

“I’ve never looked for outside affirmation about what I do [or] have a huge need for someone to tell me, ‘You’re really good at that,'” she said. “But these last couple days hearing from you I know I’ve made a difference. It doesn’t matter if the company or management doesn’t feel the same way.”