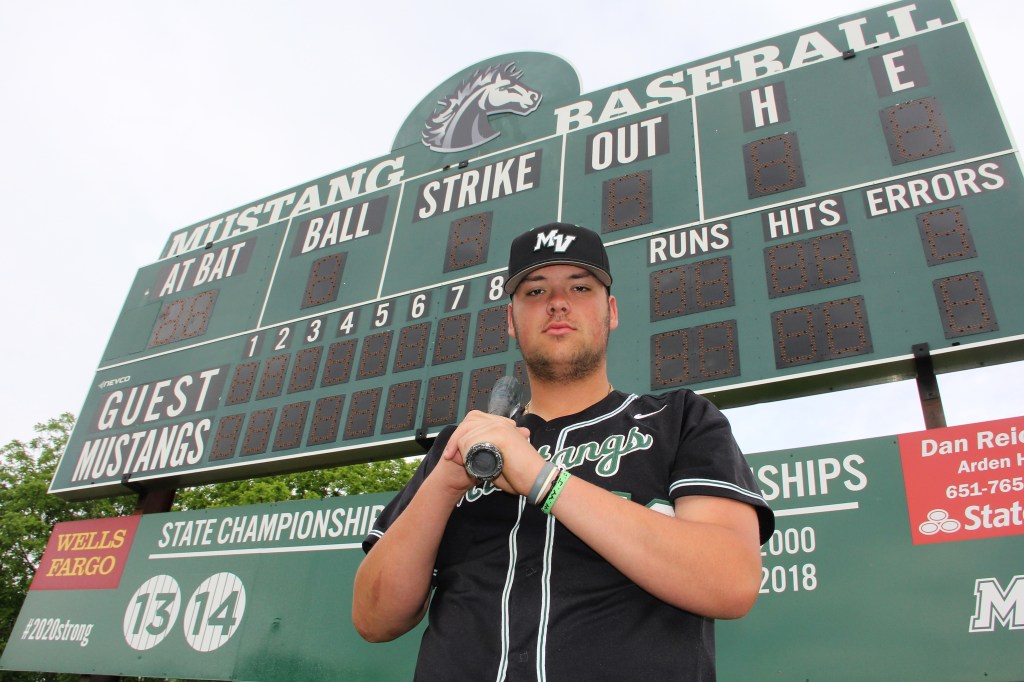 For Blake Guerin, home runs are mistakes. It’s never the Mounds View senior’s plan to launch the ball out of the park.

Like all of us, he’s an imperfect being. Which is why he made a program-record nine “mistakes” this season via long balls, to help produce 37 RBIs — also a new Mounds View high.

Mounds View coach Nik Anderson recalled a game this season in which Guerin launched two “no doubters” … in the same inning.

“He’s got power unlike many kids his age,” Anderson said. “And honestly, unlike a lot of guys at the next level, as well.”

The key for the 6-foot-7 corner infielder, who is heading to Iowa this fall, was learning how to harness that power. As a little leaguer, it was a blast belting bombs over 200-foot fences.

But when he was playing up on traveling teams when he was 12 and 13 years old, it was current Mustangs assistant coach Travis Rogers who taught him the value of stinging liners on the button.

Anderson would often tell players just to watch Guerin to grasp his feel for the game and knowledge of what would happen next.

Guerin has no intention of pitching in college; he throws mid-80s and straight. But his stuff was good enough on the mound to help the Mustangs win games. He attacked the zone ad nauseum and finished the season, which ended this week with a section final loss to Maple Grove, with a 4-1 pitching record and a 1.4 earned-run average.

“I get hit hard, even in this. But my fielders take care of me,” Guerin said. “We have guys diving for every single baseball.”

Guerin noted that, in baseball, guys often get themselves out. He certainly does. It’s hard to hit a round ball with a round bat. So you may as well go at hitters.

“He’s got great stuff, attacks the zone and trusts it. He doesn’t walk many batters, he challenges them, and it’s really a treat to watch,” Anderson said. “Our whole entire team elevated behind that.”

That’s what it’s always been about for Guerin — the team aspect. The camaraderie you develop with the same group of guys you go to the park with every day is why he loves the sport. No one can win a game on his or her own. It takes everyone.

It’s why he’ll gladly bunt if asked to, the same way he’ll walk around the field while his coach is conducting an interview to drag the cover back onto the mound, pick up and put away buckets and use a broom to sweep away puddles.

In his first season at the helm, Anderson described coaching Guerin as “an absolute joy.”

“It’s been a treat. When you get great leaders that just get it and are teammates first, lead by example, when you get that out of one of your captains, and especially a guy like Blake, it transforms the way a program feels,” he said. “And you don’t just feel that for one year, you feel that for four. We’ve loved having Blake, and for my first year, I feel incredibly fortunate to have a guy like him leading the guys and buying into a little bit of a new start for our program.”

Anderson said the power hitter is “a hard-nosed competitor” you don’t want to line up against. But at the same time, he’s friends with everyone on the field. Anderson said Guerin is “others-oriented.”

“So you get the bulldog there, but then you get the big softie on the other side,” he said, “which is why he will succeed in whatever avenue of life” he takes.

The next step is the University of Iowa. Guerin takes so much pride that he was able to wear the Mounds View jersey, but is equally excited for his next chapter. His ultimate goal is to get drafted and play professionally, and he plans to play with the same joy for the game throughout his journey.

“Keep my goal going as long as I can,” he said. “Not many people get to do it. I’m in that 2 or 3 percent, whatever it is, that gets to play Division-I baseball, and that’s something special.”

Pierce Gritzmaker, senior infielder/pitcher, Woodbury: Winona State commit has a smooth swing at the plate and pitching wins over the likes of Stillwater, Mounds View and Park.