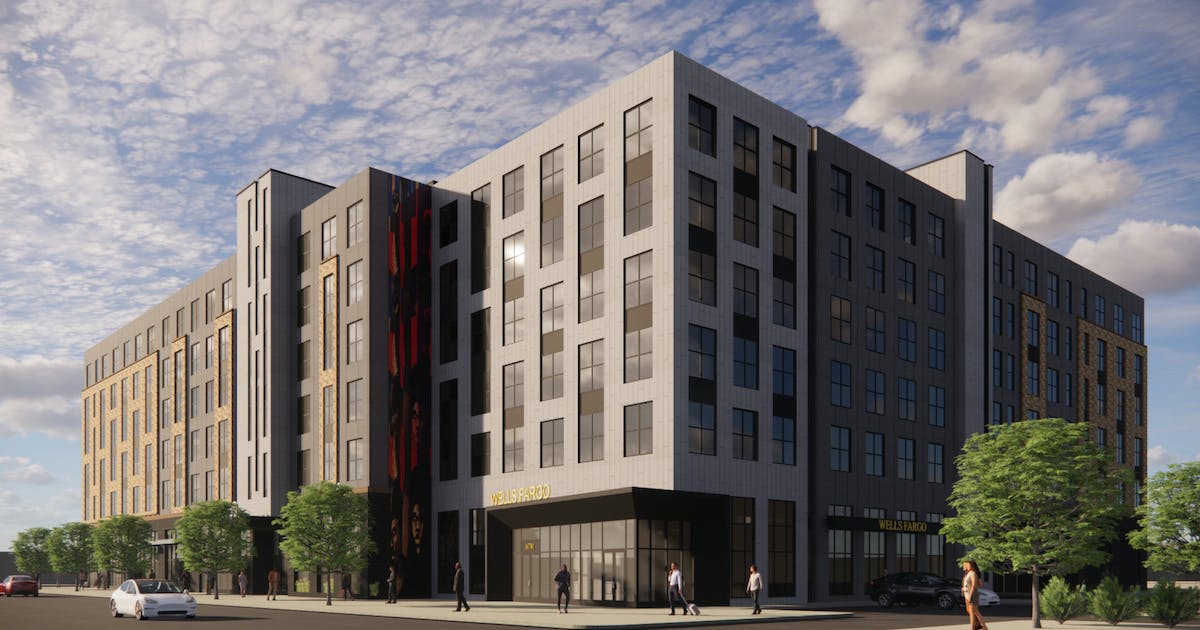 Nonprofit Project for Pride in Living will break ground in the fall on a $50 million, 110-unit affordable housing complex and small business center along Lake Street after receiving aid from the city of Minneapolis.

Mayor Jacob Frey on Thursday announced that the City Council approved $15.7 million in loans and grants from the city’s Affordable Housing Trust Fund for 10 projects, including the Project for Pride in Living (PPL) complex at the site of a former Wells Fargo branch at Lake Street and Nicollet Avenue destroyed in the riots following the police killing of George Floyd.

Overall, the 10 projects will produce or preserve 797 units of affordable, multifamily rental housing and leverage nearly $260 million in additional financing for the projects.

The final PPL plan calls for fewer units than originally proposed, but with more two- and three-bedroom apartments.

“This will be one of the transformative projects in rebuilding from the damage on Lake Street,” said PPL CEO Paul Williams. “We’ve gone through a significant community engagement process. This is about community building as much as it is affordable housing.”

The PPL project at 3030 Nicollet Av. also will result in workforce and small business training and support. The nonprofit also is being mindful to use contractors and designers that include people of color. Financing, including a $3.3 million city grant, is now being lined up.

More than 1,500 businesses in Minneapolis and St. Paul suffered an estimated $500 million in damage as fires flared, windows were smashed and buildings looted in the days after Floyd’s murder. Many of the business owners lacked insurance or were underinsured. In the immediate aftermath, community groups and foundations donated to the rebuilding effort, absent any state or federal assistance.

As of late last year, about $175 million in construction permits were issued in Minneapolis to rebuild in areas affected. The PPL project would bring that total to about $225 million.

The PPL project housing will target households making up to $50,000. One-third of the units funded through the grants announced Thursday will be targeted at households making 30% of the Twin Cities-area median income (AMI), or about $35,000, and will include 152 units for formerly homeless people and people with disabilities.

The Affordable Housing Trust Fund creates new and preserves housing for low-income renters (with incomes below $52,450 for a family of four). Almost 75% of such renters spend more than 30% of their income on housing. People of color are disproportionately hit by “housing instability” that leads to frequent moves and homelessness, the city noted in its announcement.

The City Council also approved a historic federal tax credit allocation of $1.1 million from the affordable housing fund program to spur development and construction of Calvary Apartments, a $16.7 million, 41-unit project proposed by developer Trellis and Calvary Lutheran Church at 3901 Chicago Av., a block south of the intersection where Floyd was killed.

The project will include an apartment building and units constructed inside the renovated church. The project is targeted at households making a $30,000 or less.

The other projects include:

“If we have learned anything during this pandemic it’s the importance of access to affordable housing in good times but especially in bad times,” Council Member Lisa Goodman, chair of the council’s Housing and Zoning Committee, said in a statement.

Commenting is temporarily unavailable.
We apologize for the inconvenience.