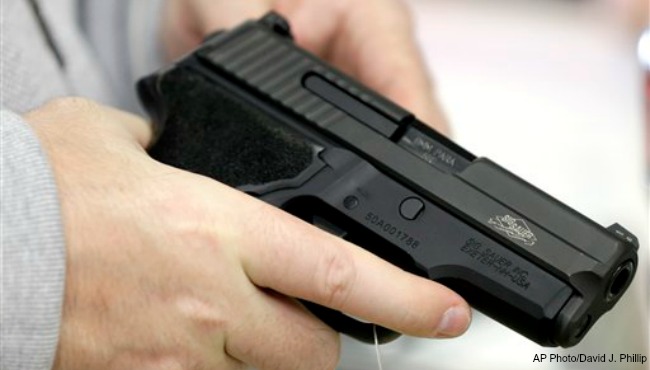 GRAND RAPIDS, Mich. (WOOD) — In the wake of the elementary school shooting in Uvalde, Texas that took the lives of 19 children and two teachers, Michigan Senate Democrats tried forcing a vote Wednesday on gun safety measures.

Last June, Democrats introduced the four bills, titled SB 550, SB 551, SB 552 and SB 553. The measures lay out new rules on storing guns and punish adults if children get a hold on the weapons.

The bills have been stuck in the Government Appropriations Committee since last June. On Wednesday, Democrats tried forcing a vote on the Senate floor.

State Sen. Jeremy Moss, D-Southfield, urged his Republican colleagues to join him in allowing the vote to take place, citing what happened in Texas.

“School children all around the country and here in the state of Michigan are wondering what are we going to do about it,” Moss said. “There is no more consequential thing we could be talking about here today as a community in Texas is reeling.”

A majority of 22 Senate Republicans decided not to vote on the bills, moving them back to committee. Fourteen Democrats had pushed for a vote.

Seven of those Republicans represent West Michigan. They include:

News 8 reached out to all of them to get their perspective. They either declined or did not respond to requests for comment as of Wednesday night.

In a speech on the Senate floor, Sen. Ken Horn, R-Frankenmuth, said it’s too soon to vote.

“We can have the conversations, have an honest conversation over what needs to be done with these bills whatsoever,” Horn said. “But these families are grieving. They are still at a point where the weight is so heavy on their chest that they can’t breathe.”

“They (the families) don’t give a flying frog what we do here in this Senate,” Horn added. “Right now, they’re not paying attention to us. It’s way too early to assign bill numbers to their grief. Let’s have an honest conversation.”

The bills lay out requirements for storing guns safely, including keeping the firearm in a locked box and in a secure location. The measures also make it a crime for adults  punishable by up to five years in prison — if a minor uses the weapon to kill or injure another person. Additionally, lockboxes and trigger locks, which are used for gun storage, would be exempt from state sales and use taxes.

“We also see tragic situations … where there’s an unsecured weapon and a child will happen to get their hands on it,” Sen. Winnie Brinks, D-Grand Rapids, told News 8. “And there’s an accidental shooting of a sibling or a small child.”

“The idea is that you’re responsible for your firearm, including what happens to your firearm, if you let it get stolen or if it leaves your premises,” State Sen. Sean McCann, D-Kalamazoo, said.

Both Democrats said it’s a common-sense idea that both sides can agree on.

“Is this always going to languish, and it’s going to be one tragedy after another with people saying there’s nothing we can do about it?” McCann said.