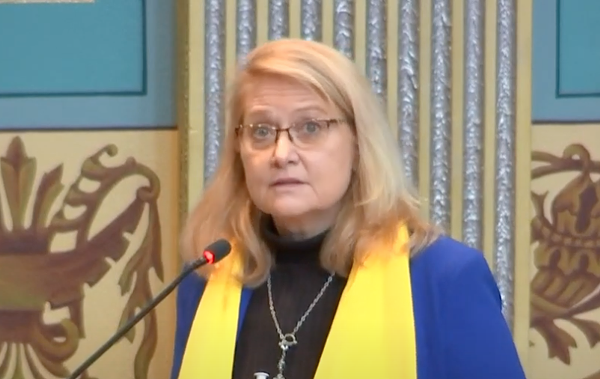 State Sen. Lana Theis came under fire for preposterously claiming in a fundraising email that Democrats want to “groom and sexualize kindergarteners” and teach white children to hate themselves.

The email came less than a week after the Brighton Republican suggested during an invocation on the Senate floor that “children are under attack” because of lessons about racial inequality and LGBTQ+ issues.

The email called out “progressive social media trolls like Senator Mallory McMorrow (D-Snowflake) who are outraged” that they “can’t groom and sexualize kindergartners” or teach that “8-year olds are responsible for slavery.”

“These enlightened elites believe our rights end at the curb of the school drop-off and we must surrender to the wisdom of teacher unions, trans-activists, and the education bureaucracy,” the email states.

Senator Lana Theis accused me by name of grooming and sexualizing children in an attempt to marginalize me for standing up against her marginalizing the LGBTQ community…in a fundraising email, for herself.

Hate wins when people like me stand by and let it happen. I won’t. pic.twitter.com/jL5GU42bTv

“I am a straight, white, Christian, married, suburban mom who knows that the very notion that learning about slavery or redlining or systemic racism means that children are being taught to feel bad or hate themselves because they are white is absolute nonsense,” McMorrow said.

“I want every child in this state to feel seen, heard, and supported, not marginalized and targeted because they are not straight, white, and Christian,” McMorrow said. “We cannot let hateful people tell you otherwise to scapegoat and deflect from the fact that they are not doing anything to fix the real issues that impact people’s lives. And I know hate will only win if people like me stand by and let it happen.”

In May, Theis introduced legislation that would prevent K-12 schools from teaching so-called critical race theory.

In a statement Monday, Michigan Senate Democrats criticized Theis for using “the Senate invocation — the solemn prayer to start Senate session — to raise money, spread lies, and harm kids for her own political gain.”

“She should not hold the title or position she does if she is going to use the pulpit to weaponize schoolchildren and launch baseless, despicable attacks against her colleagues,” they said.

“Regardless of your political affiliation, everyone should be as disgusted and as outraged as I am that Republican State Senator Lana Theis accused her colleague, State Senator Mallory McMorrow, of wanting to groom and sexualize kindergarteners,” Barnes said. “This is a sad commentary on how low the GOP is willing to go to try and win. Senator McMorrow is an outstanding advocate for public education, working families, and our most vulnerable citizens. To say or imply anything different is a lie.  Senator Theis should be ashamed of herself.  The people of Michigan deserve to have honest representation in their legislature.  We won’t hold our breath waiting for an apology.”

Sen. Stephanie Chang, D-Detroit, said she was “appalled” by Theis’s baseless claims, which she called “truly disappointing and despicable.”

“This incident represents the worst of politics today,” Chang said. “Michiganders elected us to serve and they expect us to be much better. I implore my colleagues on the other side of the aisle to take a good, long, hard look in the mirror and ask who it is they are working for, because it is clearly not the people of Michigan.”