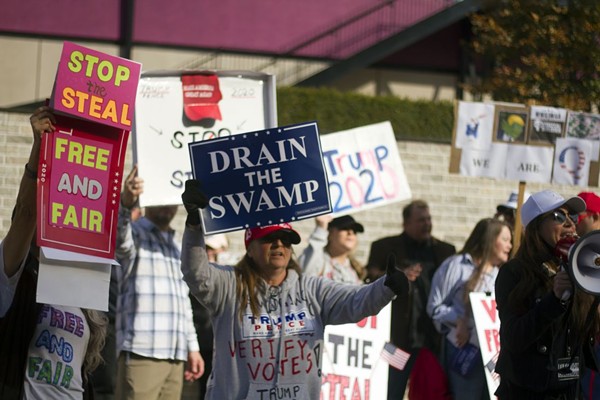 Trump supporters at a “Stop the Steal” rally in Detroit in November 2020.

The Michigan Court of Appeals on Thursday dismissed an election fraud lawsuit that sought to challenge the 2020 election results in Antrim County, handing conspiracy theorists yet another judicial loss.

The three-judge panel unanimously ruled that the lawsuit was baseless and contained no allegations of irregularities that “might have affected the outcome of the presidential election.”

The panel also rejected claims that Antrim County resident William Bailey has a right to an audit.

“The statutory language does not allow private citizens to conduct independent audits, and we are not permitted to read words into the plain language of a statute,” the court wrote.

In May, Circuit Court Judge Kevin Elsenheimer, a former Republican state lawmaker, dismissed the case, saying the lawsuit was moot because the Michigan Secretary of State’s office properly concluded that the election was fair and accurate following a statewide audit.

Human error on election night in Antrim County led to rampant conspiracy theories about Dominion Voting Systems. Shortly after the polls closed, the county’s results initially indicated Joe Biden had won the election in the conservative county. When officials spotted the error, they quickly corrected the numbers.

Trump and his supporters falsely claimed the brief error was evidence that Dominion’s tabulators were rigged.

Biden won the election in Michigan by 3 percentage points.