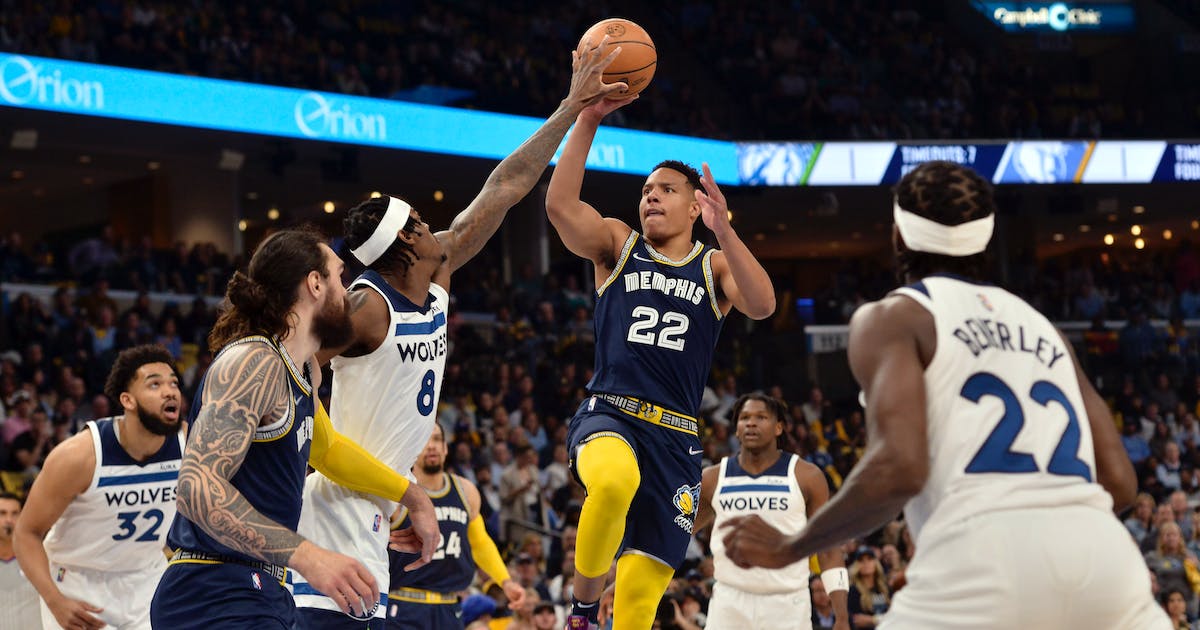 MEMPHIS – The Timberwolves said all the right things ahead of Tuesday’s 124-96 blowout at the hands of the Memphis Grizzlies.

They said they weren’t satisfied with just winning Game 1, how they would be ready for a turbocharged Grizzlies team to amp up the intensity and make adjustments.

It was all just talk.

The Grizzlies backed up their talk and responded like a No. 2 seed should while all of the Wolves’ warts were on display.

Everything the Wolves did right on Saturday — control the glass, hit from outside, Karl-Anthony Towns keeping himself out of foul trouble — they couldn’t do Tuesday at all or until it was too late.

The series is now tied 1-1 with Game 3 on Thursday at Target Center.

“We stole one in their home court. We 1-1 now,” Wolves guard Anthony Edwards said. “I’m not worried. I hope my teammates aren’t worried. We’re going back to Minnesota. They got to come to our house and play us twice at the crib. Our crowd, I’ll put our crowd up there with the best of them.

“It’s their problem to deal with.”

Ja Morant continued to dazzle with 23 points, 10 assists and nine rebounds, and could have had more had a brief injury scare not sidelined him for a bit in the third quarter.

The Wolves did split the first two games and still have home-court advantage. Maybe they learned something about how to combat what Memphis brought to the floor in Game 2. There wasn’t much else they could take away from their performance. Their offense stagnated in a way coach Chris Finch hadn’t seen in a “long, long time.”

“There was no ball movement,” Finch said. “Really super sticky. Everybody seemed to try to want to go and solve all the problems all by themselves.”

Nobody had the answers. Edwards, who scored 36 in Game 1, didn’t get going until the Wolves were already down 27 in the third quarter. He finished with 20 points on 7-for-16 shooting but hit just 1-for-5 from three-point range in the first half.

“I took a lot of bad shots,” Edwards said. “But they was loading up. I had a lot of opportunities to get off the ball, and I didn’t. I pulled it when I should’ve gotten off of it, but I learn from tonight, so I’m good. I’m perfectly fine with what happened tonight.”

This is what can happen to a 20-year-old in a playoff series.

“He’s got to learn that every game is going to be different,” Finch said. “You’re not going to come out and play the same game every time. That’s part of the learning curve here.”

There shouldn’t have to be as much of a learning curve for Towns to stay out of foul trouble.

He was on and off the floor at various points because of foul trouble. For his third foul Towns kicked himself — by kicking someone else. He dusted off an old bad habit in extending his leg on a three-point shot and picked up foul No. 3 in the second quarter.

“Just unnecessary at that point in time,” Finch said. “Really put us in a tough spot.”

Towns said he wasn’t sure there was a kick on the play, but the video showed he appeared to trip Xavier Tillman. But Towns did offer an explanation for why he does that.

“If anyone’s seen the three-point contest, I’m pretty spread out with my feet when I shoot threes for makes,” Towns said. “I do know it was a pretty far three. It wasn’t like a regular three. It was a step or two off. For a person who doesn’t jump, I’m going to jump a little bit because I got to get it there. I don’t know. I won a three-point contest shooting like that. I’m not going to change my shot because of things like that.”

The other member of the Wolves’ Big Three, D’Angelo Russell, couldn’t pick up the slack for Edwards and Towns. The team’s maximum-contract point guard had 11 points on 3-for-11. He is now 5-for-22 on the series. Russell said before the game the Grizzlies were doing a good job of denying him the ball.

“They’re going to get into you,” Finch said. “They’re going to make it uncomfortable, no matter whether they deny or get it and pressure you. We’ve got to find a way to get him some easy looks.”

On the other end of the floor, Morant again got to the heart of the Wolves defense and worked his way around the paint.

“It wasn’t supposed to be that way,” Finch said.

The Wolves also weren’t supposed to allow as many offensive rebounds as they did: 14. They allowed just eight in Game 1. That led to 19 Grizzlies second-chance points, nine of which came in the second quarter when Memphis outscored 27-17. That came with Memphis center Steven Adams playing just three minutes as coach Taylor Jenkins sat him in favor of smaller lineups against Towns with Jaren Jackson Jr. (16 points) at the five.

Before the series, Finch preached to his players not to get too high or too low based on one game, one moment in a series.

In looking at the big picture after two games, the Wolves still feel pretty good with where they are.

“I don’t remember the last team that won 16 in a row,” Towns said. “We shouldn’t be too worried. This is a series. There’s a reason why it’s a series.”