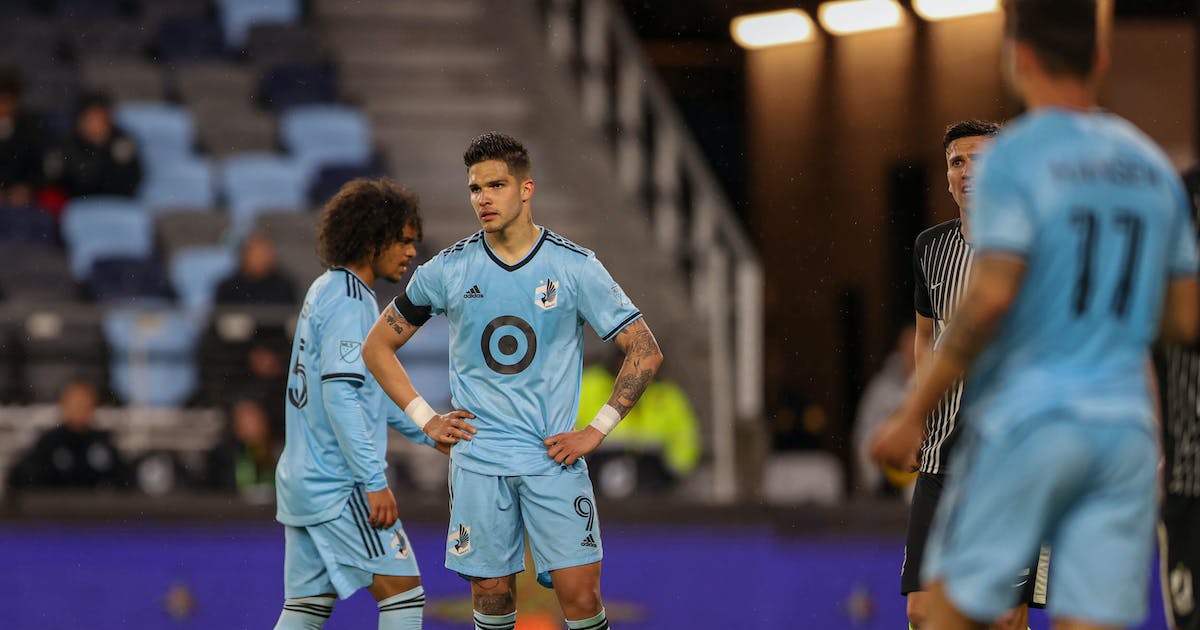 The Loons’ reign, if you will, ended with a 2-1 loss to third-division, defending USL League One champion Union Omaha on Wednesday night.

That’s when they were knocked from the all-comers tournament in which they reached the Cup final at Atlanta in 2019.

This time, they were booted from the round of 16 before a sparse crowd at a wet, chilly Allianz Field.

Afterward, Loons coach Adrian Heath called the outcome “embarrassing” on a night when his team played with a rare, limited 16-man lineup and lost despite scoring the game’s first goal in the sixth minute.

“I’ve been here before and the longer I’m in football, I’ll be here again,” Heath said. “The game is littered with it all over the world, Premier [League] clubs getting beat by fourth-division clubs and invariably it’s because you don’t approach the game better. I’ve been the underdog. If you don’t approach the game properly, these are professional kids who for some of them this might be the biggest game they ever play. They played like it might be a huge game for them and we didn’t.”

Usual starters Robin Lod, Emanuel Reynoso, Bakaye Dibassy, Dayne St. Clair and others weren’t in the lineup because of injuries or rest for Saturday’s MLS game against New York City FC. Midfielder Kervin Arriaga left in the 30th minute after he was struck in the face.

So the Loons played on with five changes in their 11, including Luis Amarilla as striker, seldom-played and highly paid Adrien Hunou in Reynoso’s playmaking spot, first-round pick Nabi Kibunguchy on the backline and reserve Eric Dick in goal.

Hunou scored the Loons’ first and only goal and then the Loons stayed quiet, though not without their share of excellent chances.

Union Omaha now has beaten two MLS teams — the Loons and Chicago Fire — in their four-game Open Cup run to the upcoming quarterfinals. It was the only third division club still in the tournament when it arrived at Allianz Field.

Heath talked afterward about reserve players who lobby for their chance to play. This time, that chance was against an Omaha team that scored just before halftime and just after it — and that was enough.

Wednesday was that chance for many in a Loons lineup Heath had called a “mixed bag,” a cross between his usual 11 and those who played most of their minutes for the Loons’ new reserve team.

“We’ve got two [Designated Players] on the field, we’ve got three internationals on the field and some guys who have played 150 games in the MLS, which should be enough to win the game if we had approached it like we should have,” Heath said. “I expect more out of the group, full stop. I expect more out of the guys who have not played an awful lot.”

Yet all they could manage was Hunou’s unmarked, left-foot strike inside the six-yard box. Union Omaha’s Hugo Kametani countered with a 45th-minute, first-half stoppage time goal in which his team went the field’s length in one kick.

Omaha keeper Rashid Nuhu’s 70-yard goal kick was flicked on ahead to Kametani on a full run past Boxall and Nabi Kibunguchy. He scored on a strike just inside the post.

“The first goal was a comic goal, one straight ball from goalkeeper, and a guy who is 5-8 heads it on and a guy runs through and scores,” Heath said. “Schoolboy stuff, really.”

Midfielder Joseph Brito scored the winning goal in the 51st minute after he controlled a long pass with his chest and then blasted a short-range volley just under the crossbar.

The Loons pushed forward repeatedly in the final 20 minutes and couldn’t get the equalizer.

The best chance was DJ Taylor’s strike off the crossbar in the 78th minute.

“It wasn’t taking them lightly,” Loons veteran defender Michael Boxall said. “Maybe it’s a bit difficult for players who haven’t been playing regularly to come in. But when you have these opportunities, we need to do a lot better than we did tonight.”