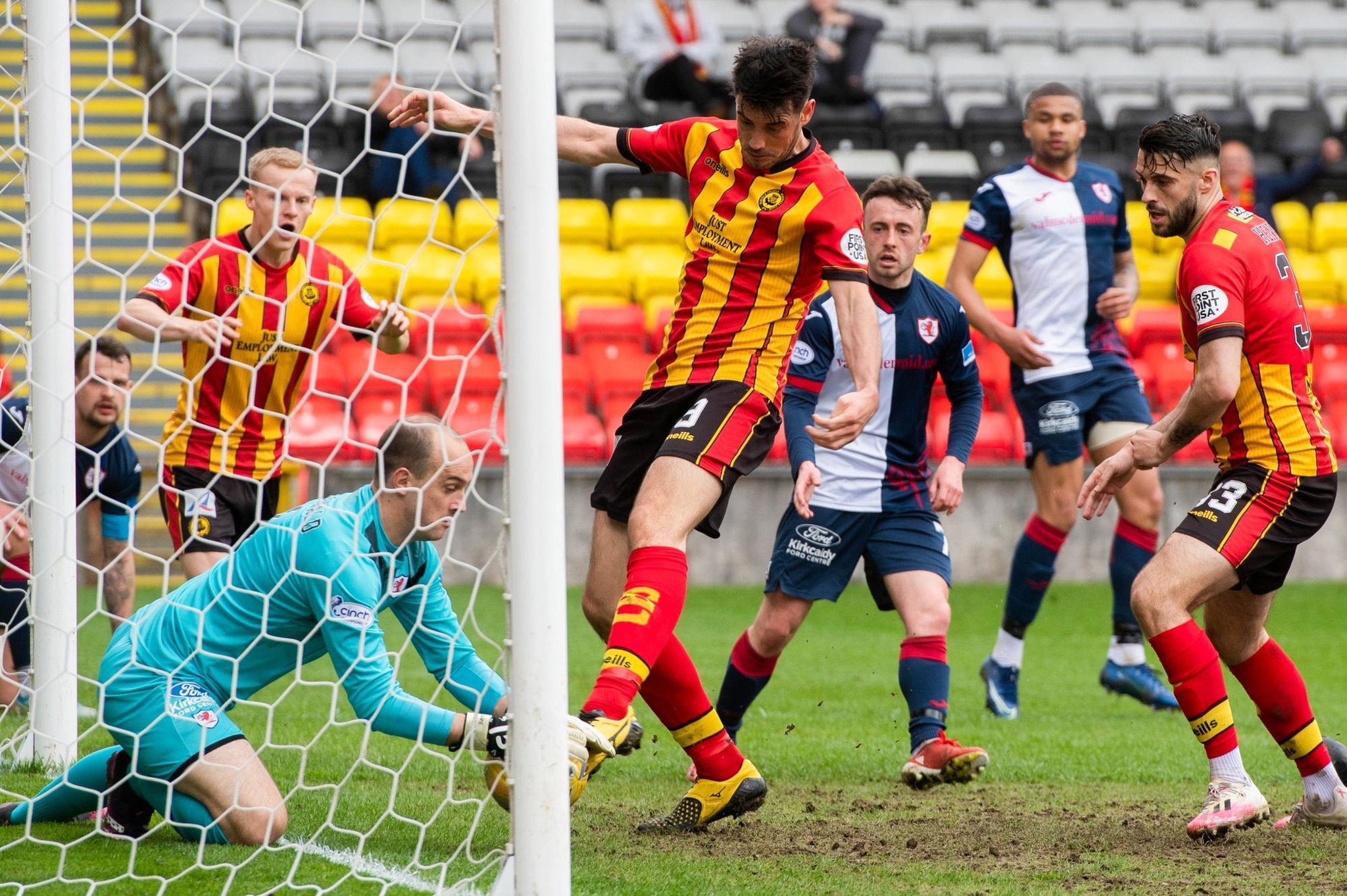 Jamie MacDonald blocks on the goal line from ex-Rover Brian Graham in the match at Firhill between Partick Thistle and Raith Rovers (picture by Sammy Turner / SNS Group).

Raith Rovers are still in touch with the play-off places after Matej Poplatnik scored an 89th-minute winner against closest rivals Partick Thistle at Firhill.

The game looked as if it might culminate in a 0-0 draw despite the efforts of both teams to play a flowing game.

Thistle were probably marginally more deserving of the win in terms of chances created and pressure – but Raith’s tenacity was to pay off in the end.

Raith boss John McGlynn said afterwards it was a very tight, typical Championship game, with nothing in it, but Raith were obviously delighted to win.

“We’ve had enough knocks losing late goals and, today we scored a late goal,” he said, praising the effort, the desire and hunger shown by his squad.

The gaffer also praised a goal-saving tackle in the dying seconds by Kyle Benedictus, describing it as “incredible” and “amazing and frightening”. He added it was probably what won the game, despite Poplatnik’s decisive strike, as Thistle’s Brian Graham was shaping to score.

After just a couple of minutes, Lewis Mayo lofted a long ball forward to Scott Tiffoney, who galloped forward into a dangerous position. His cross was intended for Alex Jakubiak but Raith’s defence managed to mop up the danger.

Ben Williamson picked up a lay-off for Raith after seven minutes and fired a left-foot shot which grazed the side netting as it went wide. Soon after, a threatening cross ball was played to Thistle’s Ciaran McKenna but Ethan Ross was back to dispossess the Jags man.

Jakubiak was only inches off target with a 10th-minute shot for the home side.

David McKay was forced to concede a corner in 18 minutes as Tiffoney came charging forward again but the Maryhill men couldn’t make it count.

From a Rovers corner by Ross in 23 minutes, the ball came to Ross Matthews, who laid off to Williamson. The Raith man’s shot went just a few feet over.

Thistle applied slightly more pressure from a free kick and then a corner, which culminated in a deflected low shot by McKenna being stopped by Jamie MacDonald.

The hosts almost took the lead on 33 minutes when Tiffoney played an excellent, intelligent pass across to Akinola, whose pace too him to the bye-line. Stephen Hendrie and ex-Rover Brian Graham were both there to meet the cross but MacDonald made a good under-pressure save from Graham

Graham got up very well from a 41st-minute Hendrie free kick to power in a header which was parried away by the Raith stopper.

Robbie Crawford took over from Thistle’s Tunji Akinola after the interval.

Six minutes into the second half, Jamie Sneddon was forced to tip over an excellent shot from Reghan Tumilty, with little danger apparent in the build-up.

Thistle followed a rather turgid spell in the second half by slowly applying more pressure, with Docherty, Tiffoney, Bannigan and Graham among those involved in moves forward.

Raith freshened things up on 69 minutes by sending on Varian and Zanatta in place of Williamson and Ross.

Zanatta almost made an immediate impact by directing Connolly’s shot towards goal but Sneddon made the save.

MacDonald captured an inswinging corner well from Hendrie after 79 minutes. Sam Stanton had earlier been booked for a foul on Tiffoney, while Thistle’s Crawford was yellow-carded for holding Varian.

Thistle sub Juan Alegria was presented with a superb chance eight minutes from time but fired wide when he should have potentially sealed the points for his side.

A Brad Spencer shot was blocked by Holt after good work by Poplatnik and Zabnatta, which looked to be Raith’s last chance.

But, with a minute remaining, Aidan Connoly barged his way into the box and laid off to Slovenian striker Poplatnik, who scored a marvellous winner for Raith.

In stoppage time, Graham looked clean through but Kyle Beneductus made a heroic challenge to rob him of possession.