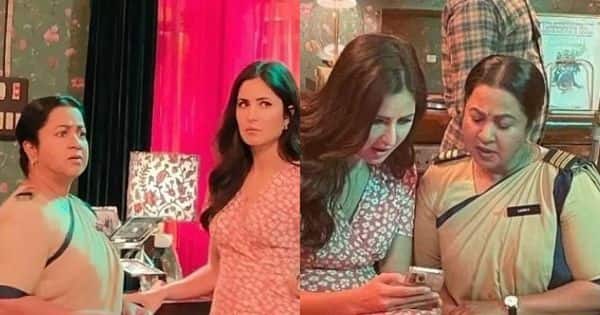 Katrina Kaif‘s upcoming film Merry Christmas has left fans excited. The actress will be sharing the screen space with south superstar Vijay Sethupathi. Well, recently BTS pictures of Katrina from the set of the film have gone viral on social media. In the pictures, Katrina was seen with Tamil actress Radikaa Sarathkumar and their pictures have set the social media on fire. Also Read – Parineeti Chopra, Nargis Fakhri and more Bollywood hotties who made heads turn with their steamy bathtub photoshoots

Have a look at the pictures – Also Read – Virat Kohli-Anushka Sharma, Athiya Shetty-KL Rahul and other celebs who kept fans waiting to make their relationship official

In the picture, Katrina looks gorgeous in a red-white dress, while Radhika has donned a cop attire. On December 25, 2021 Katrina had shared a picture with Vijay Sethupathi, director Sriram Raghavan as she announced the film. The actress wrote, “New Beginnings. BACK ON SET with director #sriramraghavan for Merry Christmas! I’ve always wanted to work with Sriram Sir, He is a master when it comes to narratives that showcase thrillers and it’s an honor to be directed by him. . Super excited to be teaming up with @actorvijaysethupathi for this one produced by @rameshtaurani & @sanjayroutraymatchbox @tips @tipsfilmsofficial @matchboxpix (sic).” Also Read – KGF 2 box office collection: Yash starrer fails to beat Salman Khan’s Sultan, Prabhas’ Baahubali in worldwide weekend figures

On the work front, Katrina will be seen next in Maneesh Sharma’s ‘Tiger 3’ co-starring Salman Khan and Emraan Hashmi. She also has Phone Bhoot and Jee Le Zaraa in her kitty.