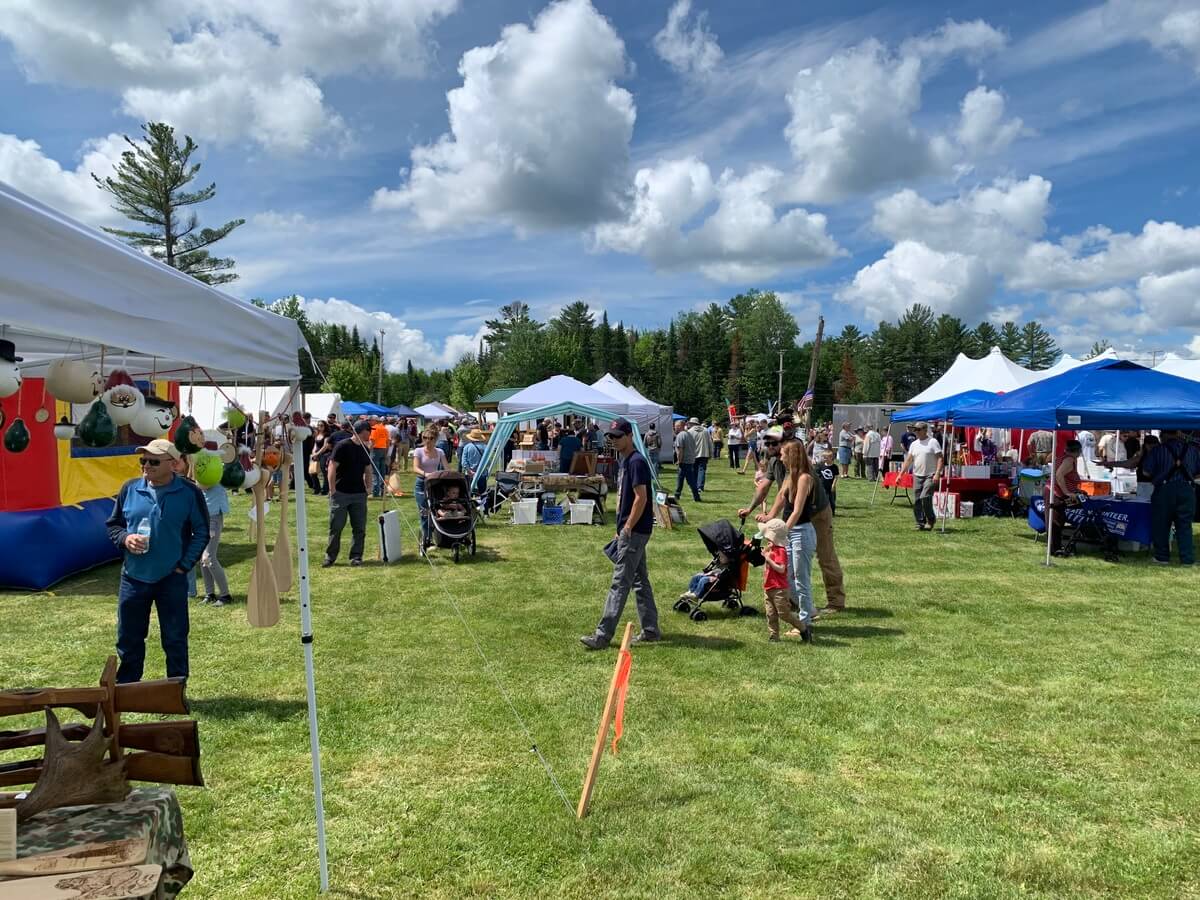 JACKMAN, Maine — This scenic border town has earned a reputation for providing visitors with beautiful vistas and for its wealth of hunting, fishing, snowmobiling, ATV and other outdoor opportunities.

On Saturday, Jackman was the center of attention statewide for another noteworthy reason — Maine’s annual moose hunting permit lottery. And if you wanted to hear your name called, you had to be there — or wait until the list of winners was published on the Bangor Daily News website.

An estimated 2,000 people, most of whom were eager to find out the results of the lottery, gathered at the Jackman Town Office grounds to celebrate the occasion as part of the Jackman Region Moose Permit Lottery Festival.

Representatives from local businesses set up tents and booths around the property to sell their wares and promote their services to an audience intent on finding out whether they or a family member or friend will be hunting moose in the fall.

It was a fun, relaxed family atmosphere that featured a little something for everybody, including a sense of humor.

The Maine Department of Inland Fisheries and Wildlife brought its moose road show to town to announce the names of the lucky 4,080 hunters whose names were selected by the computer in the lottery from among more than 79,000 applicants for the 2022.

Many moose are harvested each October in and around Jackman, as the area features the kind of big woods habitat in which the state’s largest game animal thrives.

Jackman business owners, Registered Maine Guides and residents alike were excited about having such a large throng of people attend the event.

“It’s a historic event for our community,” said Vanessa Rancourt of Jackman Maple Syrup, as she doled out glasses of maple lemonade to thirsty customers. “I live four houses up [on Route 201] and I couldn’t believe they had the no parking signs out.”

There were numerous shouts of joy in the crowded tent where the drawing was held as people heard their names read aloud, announcing they had won a spot in the hunt.

Leslie McKendry of Long Pond Township was among the names read during the second group of 100. She shared a celebratory kiss with a loved one after the announcement.

The list of winners included 22 Jackman residents, along with several from surrounding communities.

The husband and wife duo of Randy Petrin and Debbie Petrin, Registered Maine Guides who operate the Long Pond Camp and Guide Services, both were selected in the drawing. They’ll have to schedule their own hunts around the four moose hunts they plan to guide this year.

The Petrins are going to have a big advantage over the average moose hunter, since they’ll have valuable local knowledge and guiding experience to draw upon.

“I know where the moose are,” Randy Petrin said prior to the drawing while showing his appreciation for Saturday’s event.

He told the story of the huge moose mount at his booth, which was an 880-pound moose with a 67 3/4-inch antler spread. Debbie shot that one, Randy said, but two other family members also tagged 900-plus-pound bulls in the same cut on the same day.

“We need this for the town, for the economy,” Petrin said, noting that he had previously been drawn in 1988, then again five years ago.

Another of the Jackman-based permit winners was Harold “Hal” Blood, a veteran guide with big Woods Bucks Outfitters. The accomplished hunter and author is considered one of Maine’s foremost deer hunting experts.

“They said every room and cabin and Airbnb, everything’s sold out in town,” Blood said. “It’s going to be good for the economy of the town, for sure.

Kim Danforth, the owner of Bishop’s Store on Route 201, said hosting the moose lottery festival is a great opportunity to showcase what Jackman has to offer in terms of outdoor recreation and hospitality.

“All of the businesses in town are contributing and trying to make the festival as good as it can be,” she said. “We’re a little bit farther out of the way than some that have hosted in the past.”

Danforth, who was raised in Jackman and has even shot a moose herself, admits that she isn’t an avid hunter. Still, she knows the value of the moose hunt to the community.

“It’s been a long time since we’ve had this many people in town,” she added.

Lee Kantar, the moose biologist for DIF&W, was pleased to see such a large gathering on the town office grounds to celebrate all things moose.

“This is a great turnout for the town of Jackman,” he said.