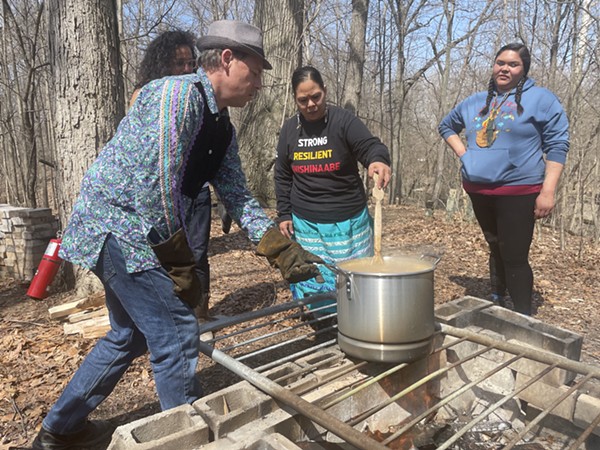 Sun rays peek through the trees at Detroit’s Rouge Park as members of Michigan’s Indigenous community gather to turn maple syrup into sugar. It’s like watching magic happen before your eyes as the syrup is boiled and then churned into fine crystals in a wooden trough. Sugarbush season has come full circle, as these surrounding trees were once tapped for maple sap to make the syrup and subsequent sugar.

It’s a pleasant day for everyone involved as community members impart their wisdom of the old ways, but the occasion is cloaked in trauma. Two months earlier, at the exact same spot, the Detroit Police Department raided a sacred ceremony marking the start of maple sugaring season.

On Feb. 18, Indigenous leaders were offering thanks to mother earth with a ceremonial fire when DPD showed up with helicopters and tactical gear, forcing the group to leave with threats of arrest. On Monday afternoon, the Detroit Indigenous Peoples Alliance and ACLU held a press conference calling for accountability and a restorative justice sit-down meeting with DPD.

While DPD quickly released a statement apologizing for the incident, Detroit Sugarbush Project organizers feel it was insincere and want to foster more understanding between police and the indigenous community so this won’t happen again. It’s the second year in a row the tradition has been disturbed by police.

Bonsitu Kitaba, deputy legal director for the ACLU of Michigan, said the incident was a violation of the freedom to practice religion that’s protected by the constitution.

“Today, we are calling on the Detroit Police to recognize that they have engaged in actions which violate the constitutional rights of the native peoples here and to rectify those wrongs by engaging in a restorative justice practice, and additional training and understanding of what these practices mean to the native peoples here in Detroit,” she said. “Without that acknowledgment and action forward, the Detroit police will fall in line with the historical oppression of native peoples that have been faced by this community for generations.”

Restorative justice is a practice where both the offender and victim of wrongdoing sit across the table from each other to listen and (hopefully) heal the relationship between both parties. While there is a clear disconnect between law enforcement and the native way of life that’s rooted in nature, community members are optimistic.

“Just because we signed treaties didn’t mean we gave up our rights,” Jefferson Ballew IIII from the Pokagon Band of Potawatomi Indians Bear Clan says. “War will never be our way of doing things. Just like we’re doing here, we’ll always educate. When people say, ‘why are you going to teach them about it? Why do you want to show them your own respect and your own self?’ If we don’t, who will? I don’t want my kids, my grandkids to ever have to do this again. So that is why we always reach out.”

Ballew was at the February night ceremony and was given just two minutes to extinguish the group’s ritual fire or be arrested. He added, “every time native people show up to be sacred, it’s what scares America the most.”

Mark Fancher, Racial Justice Project attorney for the ALCU of Michigan, added they are recommending restorative justice because it has a well-established record of success.

“In a situation where there is a skilled facilitator, it is very successful in causing even, for lack of a better term, hardened criminals to come to terms with the fact that they have caused harm,” he said. “In a situation like this, where you have officers who may be ignorant — they may be arrogant but probably most of them think they’re doing the right thing — I think that the prospects for success are much higher.”

He said the ALCU does not enjoy suing people, contrary to what most people believe, and they would rather “have those who violated the rights of others acknowledge the violation, and act quickly and promptly to correct the errors that have been made.”

DPD’s previous statement said the sugarbush ceremony was unauthorized because the organizers’ Memorandum of Understanding from the city and burn permit for the fire were expired.

The group clarified that they applied for the proper burn permit and MOU months before the ceremony and were still waiting for them to be issued when sugarbush season started. The burn permit was delayed by a clerical error on the Fire Department’s end, but nature waits for no one.

“Responding to public comments from the police, consent for Indigenous ceremonies and activities does not come from the city government, but from the creator and from nature itself,” Detroit Indigenous People’s Project leader and Huron Potawatomi tribe member Alexis Chingman-Tijerina says. “This is who we are. For this project, consent has come from our local Anishinaabe elders and a handful of Anishinaabe sugar makers all over Anishinaabe Aki, which is the name that we call the Great Lakes. This is a culturally appropriate means of obtaining permission.”

Along with a call for restorative justice, The Detroit Indigenous Peoples Alliance has released a set of demands including that the City of Detroit works to “honor all treaties and adhere to the principles of Free, Prior, and Informed Consent (EPIC) for any action that would affect Indigenous lands, territories, or rights.”

They’re also calling for the police to “apologize meaningfully” and for the officers who approached the fire to be reprimanded and required to attend cultural awareness training. The group says they have sent their requests to DPD with no response so far.

As the day rolls on, Ballew, his wife Sonja Ballew, Chingman-Tijerina, and Sugarbush Project organizer Antonio Cosme share laughs with gatherers and invite them to taste the sugar (and amazing banana bread that Sonja made).

It is, perhaps, reminiscent of what a restorative justice meeting with police might look like — people gathering and sharing cultural practices to connect on a human level.