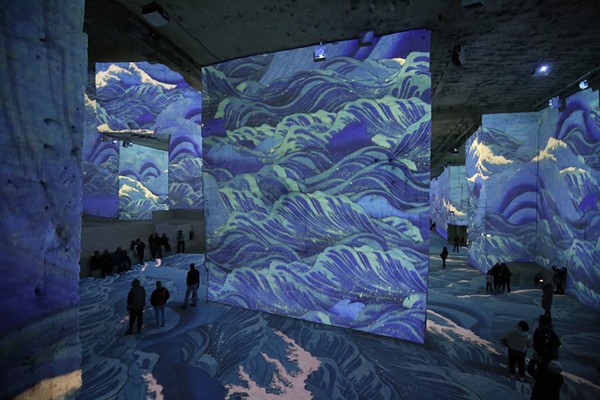 The Immersive Van Gogh Detroit exhibit that was supposed to happen in 2021 has been pushed back once again. After moving to open this month, the event, which uses projection mapping technology to create immersive environments using the art of Vincent Van Gogh, is now scheduled for May 12 and will run until Sept. 5.

Ticketholders received an email from Corey Ross, the producer of the exhibition, informing them of the delay on Thursday. The announcement comes in poor timing, as the exhibit was supposed to begin next week.

“Unfortunately, due to challenges caused by the COVID Omicron variant, and with the health and safety of employees and guests in mind, the opening date has been rescheduled for May 12, 2022,” Ross said in the email. “We truly understand your frustration and disappointment. We are eager to share our incredible immersive experience with you, but want to guarantee the best possible experience for you that we can.”

Frustration and disappointment may be an understatement. Some ticketholders are pretty pissed, pointing out that a similar Van Gogh-themed event was successfully held last year in Detroit, coronavirus and all. (For the record, that was Beyond Van Gogh: An Immersive Experience. The one that keeps getting delayed is Immersive Van Gogh Detroit. We know, it’s confusing.)

“I bought tickets months ago thinking this would be the better show and now this is the second time with a HUGE delay,” Jason Barczy writes to Metro Times in an email. “I originally had tickets set for this January, was pushed back to April, now I have no idea if this show is ever going to happen. With vaccinations and masking can’t they pull this off? Is this a scam now? Should I see if I can even get a refund? Now they’re promising free tickets to another show that will supposedly happen in September 2022. What a joke.”

Indeed, the event organizers are offering free tickets to Immersive Klimt, which will feature the art of Austrian painter Gustav Klimt and opens in September, as a sort of apology for the Van Gogh debacle. And it does seem like ticketholders can get a full refund by sending an email to [email protected].

Comments on the Immersive Van Gogh Detroit Instagram page echo similar negative sentiments, and we can’t say we blame them. “This event is sketch af,” one person writes. Another commenter asks, “have the event dates changed again? And is there still no location? I have two sets of tickets and the first set have been moved again- this time to a date I cannot make.”

Some kind of good news is that the venue, which was previously kept secret, has actually been revealed. Lighthouse ArtSpace Detroit, formerly known as the Harmonie Club Building at 311 E. Grand River Ave., will host both the van Gogh and Klimt shows.

“This iconic 38,000 square foot landmark building in the heart of downtown Detroit will be transformed into a space where art comes to life,” the email from Ross says. “One-of-a-kind experiential elements will be designed and crafted specifically for the space by Emmy Award-winning and Tony Award-nominated designer David Korins, known for his set designs featured in numerous Broadway hits including ‘Hamilton’ and ‘Dear Evan Hansen’.”

Sounds great, but metro Detroiters may be feeling more skeptical than excited at this point.

If all else fails there’s still the Van Gogh in America exhibit set to open at the Detroit Institute of Arts on Oct. 2 to look forward to. It won’t feature digital projections that cover the floors and walls, but it will coincide with the 100th anniversary of the DIA’s purchase of Van Gogh’s iconic “Self Portrait.”