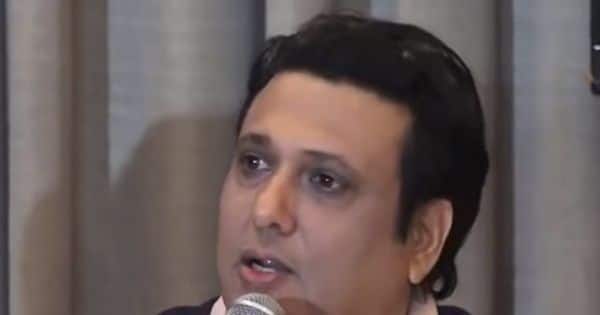 Govinda ruled the 90s like no other actor and swooned everyone with his acting and dancing skills. He was at the peak of his acting career when he decided to join politics for a while. He then vanished from the showbiz. There were reports that the actor lost projects because of his unprofessional behaviour with the industry people. In a new interview, Govinda has opened up about filmmakers going against him and responded to the allegations of being unprofessional. Also Read – Govinda finally reacts to Krushna Abhishek’s tearful public apology; ‘Show some love off-camera’

“When you’re successful, there are many who’ll try to pull you down. When I was at the peak for 14-15 years, when everything was going in my favour, nobody raised these issued. This is the film industry, people change with time, and so do equations. I was at the top for 14 years, there was no planning. But when I realised that people were turning against me, I couldn’t do anything about it. People who grow up with astrology, numerology, vastu shastra… They don’t pay attention to these puny people. It’s too small a factor to look at. Mountains crumble too,” he told Maniesh Paul. Also Read – From Deepika Padukone to Abhishek Bachchan: 5 statements of Bollywood actors that made no sense at all

During his 2018 media interaction ahead of the release of his film Rangeela Raja, Govinda said that there was a conspiracy hatched against him by a certain section of the industry. He said that he was sidelined because he was never a part of any Bollywood camps and people would used to spread negative things about him, which resulted in work and he suffered huge financial losses. Also Read – Move over Akshay Kumar, Mahesh Babu, Priyanka Chopra, Ranveer Singh and 6 more Bollywood actors have endorsed pan masala brands

In the same interview, Govinda also opened up about his ongoing feud with Krushna Abhishek. He reacted to his tearful public apology and said that if the love was genuine, it should have been shown off screen. The actor further said that he met Krushna four times in the hospital but he was told that he couldn’t meet his newborns.