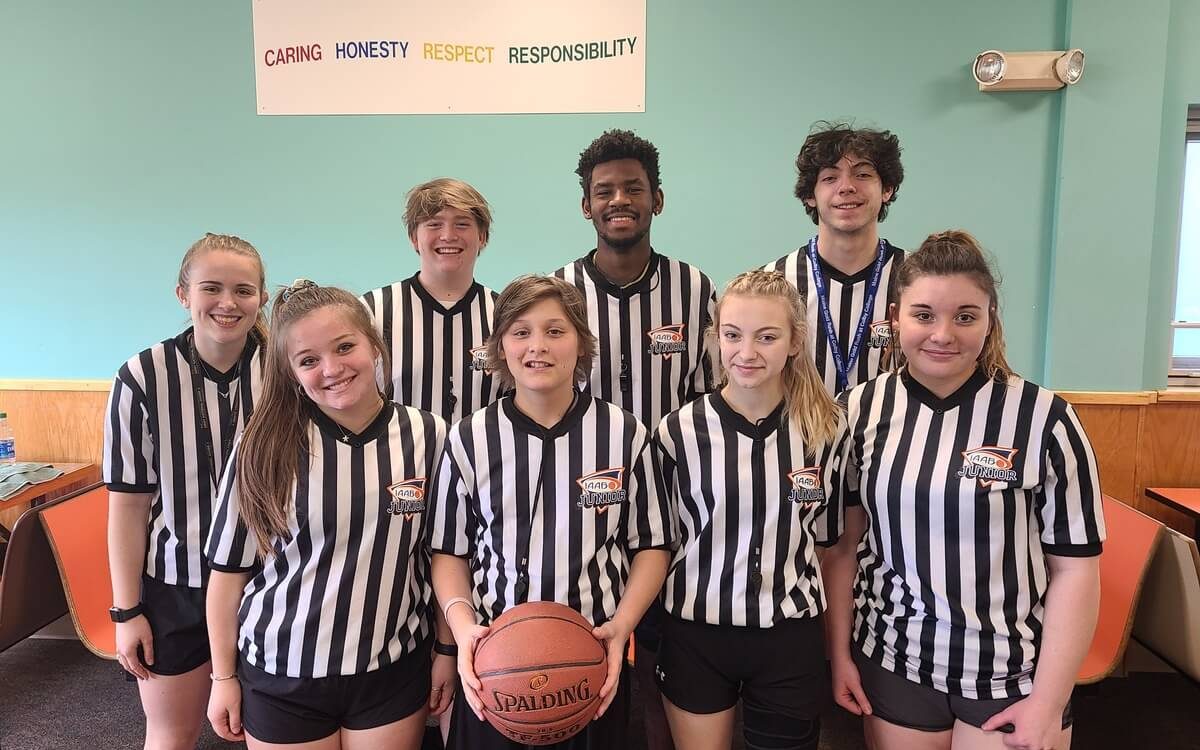 As Audra Faulkingham and Brynne Sawyer went through their first seasons as young basketball officials, they experienced many of the stressors that have led to referee shortages in many interscholastic sports.

There was the self-imposed pressure to understand the rules and mechanics of the discipline well enough to make the proper call at the proper time. There also were the external pressures often expressed by those watching the games from the sideline or bleachers.

“Sometimes I think the parents forgot that we were 16- and 17-year-old volunteers,” said Sawyer, who, like Faulkingham, is a junior at Belfast Area High School.

Yet neither debut basketball official was too discouraged after being among a dozen local teens who worked third- and fourth-grade basketball games during the winter. The push to include teens as referees is just one way the community is coping with an ongoing shortage of officials that has wreaked havoc on sports schedules statewide.

“My dad is a basketball official, and I’ve seen how he’s had such a good time with it,” said Sawyer, a former basketball player herself who this winter teamed with Faulkingham as managers for the BAHS boys varsity basketball team. “It’s really just so awesome to me that he’s able to help out and do all these basketball games so they’re able to have the games.

“I felt that same thing. It’s really so important for people to have those games, and just to be a part of it is an awesome opportunity.”

The effort to introduce teens to officiating in the Belfast area was organized by Scott Cournoyer, a local member of Eastern Maine Board 111 of the International Association of Approved Basketball Officials.

After learning there weren’t enough officials to handle all of the local youth league games held at the Waldo County YMCA, Cournoyer sought out high school students familiar with the sport to help with third- and fourth-grade contests and provided some basic training sessions before the games they worked.

The training for that event was much more rigorous, with a week that began with classroom education from 3:30-5 p.m. each afternoon that focused on scenarios and rules and concluded with an on-court session where the aspiring officials practiced the mechanics they had studied.

Those classes were aided by “IAABO University,” a series of PowerPoint presentations developed and customized by members of Maine’s International Association of Approved Basketball Officials community.

Julie Goupille, a veteran basketball official from Aroostook County, has served on the association’s Education and Development Committee for the past four years and been active in developing its online educational tools.

When she learned last spring about one Maine high school athletic administrator who was interested in creating a class in basketball officiating for his students, work began on adapting the “IAABO University” course to fit a younger clientele like the “Junior IAABO” movement that has grown to become a nationwide effort to encourage teens to consider officiating in an effort to maintain their relationship with the sport once their playing careers end.

“With the help of IAABO officials from around the country, we developed a course outline using a modular approach that would give users the flexibility to teach as much as they could fit into whatever time frame they had for each class,” Goupille said.

That course became the foundation for Cournoyer’s pre-tournament classes, instruction the young referees found beneficial during their postseason duty.

“I had been asked to help during the season, and it was hard without taking the class because I didn’t play basketball this season because Brynne and I managed, so I felt a little lost sometimes,” Faulkingham said. “When they offered the class I really wanted to learn all of the rules and everything because I thought it would be more fun to know exactly what I was doing.”

Eight young officials participated in the Lions’ Den third- and fourth-grade tournament games,  each working six games leading up to the championship finals including one semifinal apiece.

Four ultimately were selected to join Cournoyer in three-person crews that officiated the boys and girls championship games, with Goodwin and Ritter working the boys final while Faulkingham and Sawyer officiated the girls title game.

“I was really pretty nervous, and as the game continued it was pretty back and forth, very close, and I was even more nervous because you don’t want to mess up and cause a change in the game,” Sawyer said. “But it was very helpful having Scott there because we knew that if we made a call that maybe wasn’t really correct that he would help us and say maybe you ought to call it this way instead.”

Cournoyer said all of the tournament officials expressed a desire to continue refereeing basketball, and some are considering following a similar path in another sport.

“It’s a good thing to get into because we need them.”

Cournoyer plans to offer a basketball officiating the class in Belfast again later this year during the break between the fall and winter sports seasons.

“My hope is this will be just the beginning and that it spreads through the entire state of Maine and honestly across the country,” he said. “It will do so many things for the kids, not only make you a better player but make you just a better young adult, and hopefully we can recruit more officials who want to do this and it can help kids teach their parents how to be a good sport, too.”