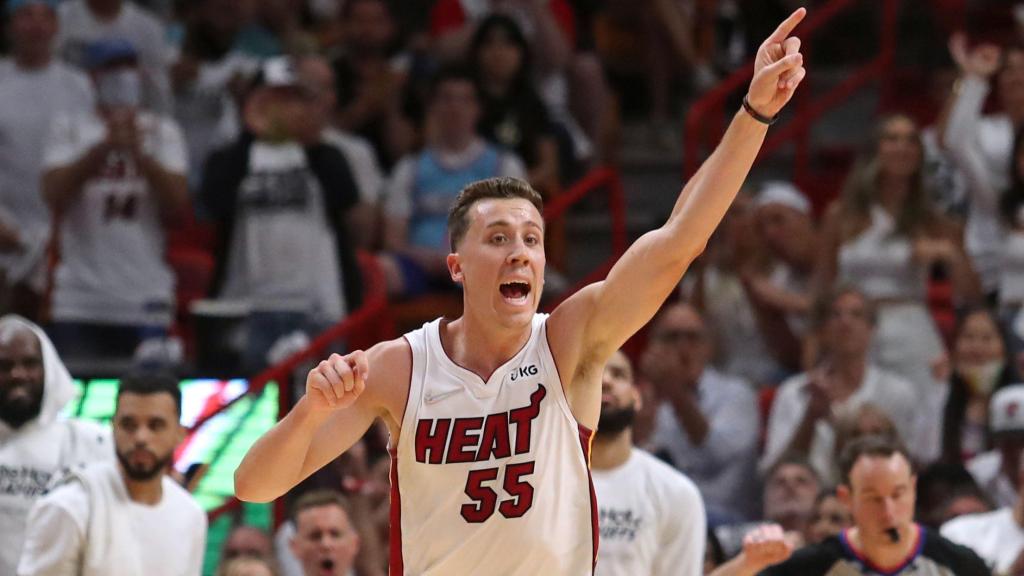 It is a statistic skewed by who is not included. You won’t find Jimmy Butler, Kyle Lowry or Bam Adebayo on this list.

But where you will find Duncan Robinson is second to only one, with that one being the presumptive NBA Sixth Man of the Year.

No, Duncan Robinson never knocked on Erik Spoelstra’s door in the coaching suite at FTX Arena and demanded a shift to the second team. It was a move, Robinson would later acknowledge, that led to introspection.

And yet only two Heat players averaged double-digit points off the bench this season, One, Tyler Herro, a finalist for the NBA Sixth Man award, averaged a league-best 20.8 in his 56 games as a reserve. The other, Robinson, averaged 10.2, a second jolt of second-team caffeine for Spoelstra to put into play.

So when Sunday’s playoff opener rolled around, Robinson rolled in with 27 points in the 115-91 victory over the visiting Atlanta Hawks. Because these days, since Spoelstra realigned his rotation on March 28, with season-ending 6-1 results, that is what Robinson does.

“This season, I’ve learned a lot, a lot of different ways, a lot of different experiences,” Robinson said, with the Heat turning their attention to Tuesday’s 7:30 p.m. Game 2 at FTX Arena of the best-of-seven opening-round NBA playoff series. “The beautiful thing about this time of year, you just got to lock in on what’s in front of you, everything that was is in the past.

“And whatever I can do to help us win is what I’m all in for. And whatever that looks like, I’m willing to buy into it and I am buying into it.”

Until Spoelstra’s reordering of the rotation in late March, Robinson had started every game the past two seasons, with 209 starts in his first 228 NBA appearances. This wasn’t the back-and-forth to the bench that Herro and others have experienced.

Robinson balked when asked if the transition was difficult, then offered perspective.

“I wouldn’t necessarily say difficult,” he said in the wake of shooting 8 of 9 on 3-pointers in Game 1, a franchise postseason record for conversions. “There’s challenges that come with it, for sure. Difficult is relative. So, for me, it took a little time, which is expected.

“I started most of my career, at least wearing this jersey. So, in that sense, yeah, it’s a little bit of adjustment.”

Spoelstra felt comfortable with the strategic elements of the switch that moved Max Strus into the first five. Where he struggled was with the perception that the move would be viewed externally, as it was, as a demotion.

“It’s one of the things that I really disliked about making that decision, because I knew on the outside people would be jumping to a bunch of different conclusions,” Spoelstra said. “In my mind, Duncan was still going to be a major factor. I don’t have to explain it. But he’s had like some incredible moments, which nobody’s paying attention or focusing on the wrong thing, you know, about who’s starting or who’s not. Whatever, I don’t care.

“He’s had those ignitable moments where he can change quarters, hits one or two and then all of a sudden it feels like he hit six. I understand all the narratives out there. That’s the tough part of this business. But Duncan’s very steady. He understands that even though he’s coming off the bench, he still has a major opportunity to impact the game.”

Which he did with his 11 second-quarter points Sunday, a quarter when the Heat effectively put the game away.

“There’s a little adjustment in who I’m out there with, time of game, that sort of thing,” he said. “In some respects, it can work as an advantage. I feel like I’m a little bit less prepared for [by the opposition]. You can always have those first couple of possessions where maybe they’re not exact in terms of who’s guarding who. So I try to advantage of that when I can.”

Otherwise, he said it’s the same as in his 68 regular-season starts, when he averaged 11 points.

“In a lot of senses, when I’m on the floor, like my role is what it is,” he said. “So outside of time of game when I’m out there and who I’m playing with, that’s really the only thing that changes. How I play shouldn’t really change.”