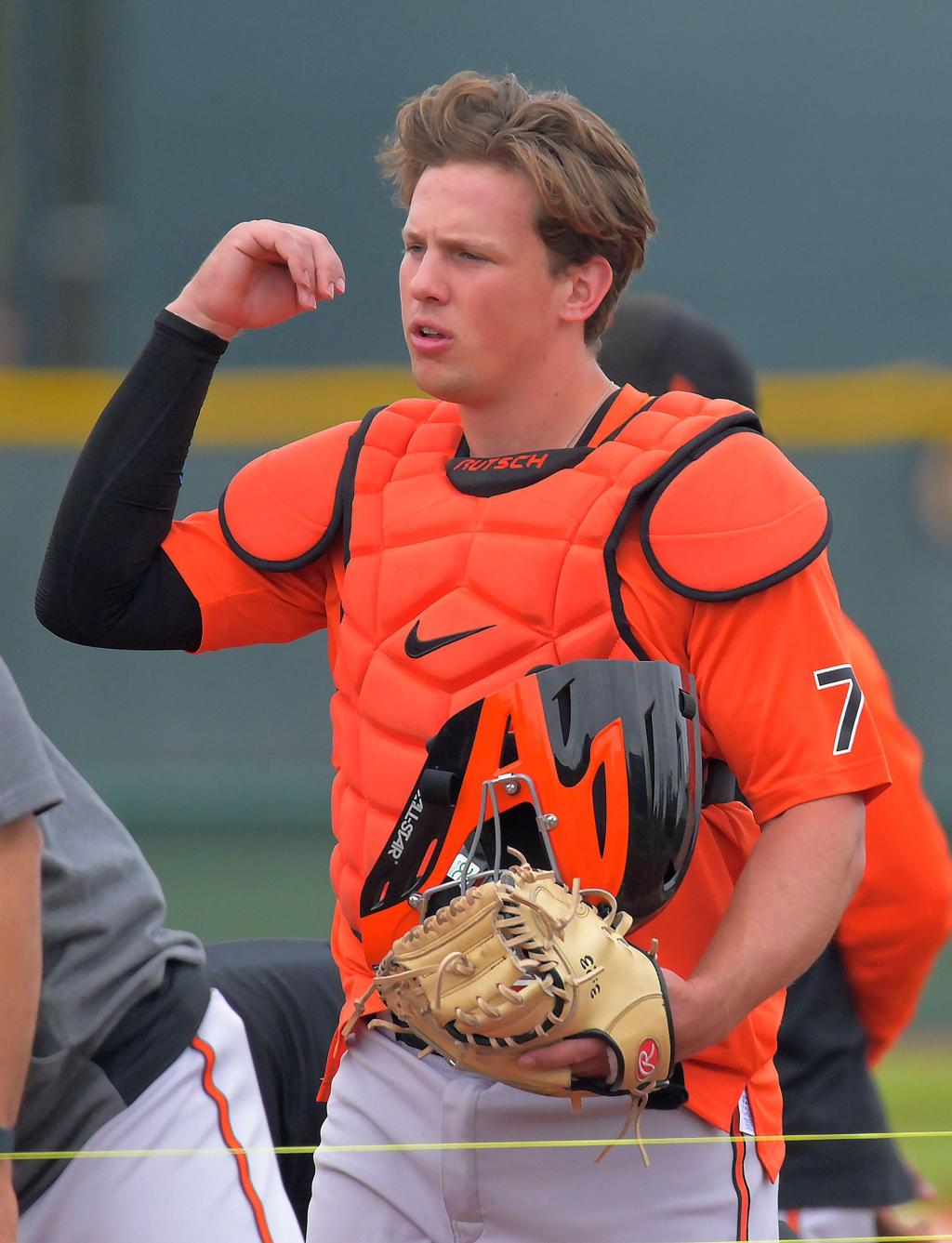 A series victory over the New York Yankees represents an early highlight for the Orioles at the major league level, but there have already been several across the minors.

Recent draftees and international signees are beginning to blend at both A-ball affiliates. The Orioles’ future infield might be on display each night at Double-A Bowie. At Triple-A Norfolk, a lineup full of on-the-cusp batters is having success while the organization’s top two active pitching prospects dominate.

That last group will begin making an impact in the majors in the near future, but for now, they’ll have to settle for being featured in The Baltimore Sun’s weekly minor league reports. This edition looks back at, in the case of Norfolk players, the first two weeks of the minor league campaign, but each week going forward, we will break down five of the top performers in the Orioles’ prospect ranks and hand out some superlatives for those who didn’t make that cut.

Baseball’s top pitching prospect was drafted in the first round in 2018 but didn’t make his first Grapefruit League appearance until this spring, pairing a dazzling first inning with a cumbersome second. Rodriguez has stuck to the outcome of the former in his first two Triple-A starts.

Over nine innings, Rodriguez, 22, has allowed two runs on four hits, striking out 15 batters against one walk. The dominant start has fans clamoring for a debut, but including his time last year with Double-A Bowie, Rodriguez has made 20 starts in the upper minors and has yet to pitch past the fifth inning. Last year, the Orioles were safeguarding their prized arm coming out of the coronavirus shutdown. This season, they’re still building him up, with Rodriguez yet to reach 70 pitches in an outing. They’ll likely want him to get at least a score beyond that and pitch into the seventh inning or so before considering an outing at Camden Yards.

After two impressive spring outings against lineups of Yankees and Philadelphia Phillies regulars, Bradish briefly stayed behind in Sarasota to get further built up. It hasn’t seemed to take him long to catch up to Rodriguez. Named the International League Pitcher of the Week on Monday, Bradish pitched nine innings of one-run ball in his two starts last week against New York’s Triple-A affiliate.

The best-regarded of the four pitching prospects the Orioles received from the Los Angeles Angels in December 2019 in the trade for starter Dylan Bundy, the 25-year-old already spent most of last season at Triple-A. Like Rodriguez, he’s topped out at 67 pitches thus far, but once Bradish gets stretched out, it shouldn’t be long until he’s in the majors, especially if he keeps pitching like this.

Westburg is part of an exciting infield with Bowie, sharing the dirt with fellow top prospects Gunnar Henderson and Joey Ortiz, the latter of whom had a handful of defensive highlights during the week. Bowie skipper Kyle Moore has managed to get all three some time at shortstop, but Westburg is the only one thus far to get work at both second and third.

He also made an impact with his bat. Four of Westburg’s nine hits have left the yard, with his all-fields approach on display for a home run through falling snow Sunday. He’s also drawn six walks against eight strikeouts, posting an OPS of 1.021.

Stowers gets the headline, but this is really an opportunity to shout out many of the Tides’ hitters. Despite missing several games after an opening day hit-by-pitch to his hand, Stowers, Baltimore’s No. 7 prospect, returned and raked, ending this week with a slash line of .381/.519/.905. Tyler Nevin and Terrin Vavra, both products of the Mychal Givens trade with Colorado, have an OPS of .890 and .820, respectively, with Nevin, one of the Orioles’ final cuts this spring, tying a Norfolk record with eight RBIs on Friday. Between them in OPS ranks are Jahmai Jones and Rylan Bannon, infielders who came to Baltimore in trades with the two Los Angeles franchises. Only Nevin and Jones have appeared in the majors, but all could at some point.

Yusniel Diaz is also worthy of recognition here, carrying his hot spring into the season, though he’s since been shelved with a right hamstring strain, yet another lower-body injury for the former top prospect.

Haskin actually hasn’t played since exiting Wednesday’s Baysox game after getting hit by a pitch, but what he did before that was impressive enough to warrant recognition here.

In Bowie’s first game of the year, the 2020 second-round pick recorded three doubles, then two days later, he added two bases to each of those for a three-homer game. Known more for his speed, Haskin hit only five home runs in 83 games last year for Low-A Delmarva and High-A Aberdeen.

He was originally going to return as part of Sunday’s lineup before being scratched amid the frigid temperatures, so the hope is he’ll return sometime this week.

The top prospect not featured so far

Catcher Adley Rutschman, the Orioles’ — and in the eyes of several publications, baseball’s — top prospect, might already be in the majors if not for the right tricep strain he suffered on the cusp of major league camp. Instead, he remains at the Orioles’ complex in Sarasota, Florida, working toward joining an affiliate in hopes of reaching the majors in the near future.

In an interview Friday with MASN play-by-play broadcaster Kevin Brown, executive vice president and general manager Mike Elias said Rutschman could return to game action “very soon,” adding that the Orioles want him to participate in “normal, everyday play” before joining an affiliate. Then, it becomes a matter of getting his timing back.

“I think once we see that, we’re gonna know that [he’s] back to the player we had at the beginning of spring training, when he has poised to impact the roster,” Elias said. “I think that’s all going to happen very quickly.

“On a week-to-week basis, we’re going to keep an eye on how it’s going with him, and the sooner he gets back into his timing, I think the sooner he’s going to make the team. He’s doing very well in coming back from the injury, and he was looking better than ever prior to the injury. It was just really as bad of timing as you could have.”

International acquisition of the week

With the Orioles’ increased focus on Latin America in recent years and the players who came to them as a result of that beginning to matriculate into their full-season affiliates, this year’s roundups will highlight minor leaguers who are byproducts of the organization’s increased international investment.

Delmarva outfielder Isaac Bellony, 20, is with a full-season affiliate for the first time after signing with Baltimore for $220,000 in 2018 after then-executive vice president Dan Duquette said the organization would increase its international presence.

Among the nearly 40 Orioles minor leaguers who have at least 20 plate appearances so far, Bellony ranks third in OPS (1.062). The switch-hitter’s numbers would be even better without his performance as a right-hander, a side he also struggled with last year in the Florida Complex League. Against lefties, he’s 0-for-6 with five strikeouts, but hitting left-handed, Bellony is 10-for-22 (.455) and slugging .818.

The best former top-30 prospect of the week

After posting a .690 OPS with Delmarva last year, infielder Darell Hernaiz is back with the Shorebirds, and the 20-year-old is off to a great start. Baltimore’s fifth-round pick in 2019, Hernaiz is hitting .375/.412/.625, having homered twice already after doing so six times in 94 games last year. He’s also dropped his strikeout rate by almost 6% in the early going.

The graduations that are sure to come in front of him paired with this strong start mean Hernaiz might not be eligible for this category much longer.

Time to give some shine to …

After going unselected in 2020′s shortened draft, right-hander Brandon Young posted a 3.52 ERA between Delmarva and Aberdeen, ranking sixth in the organization in strikeouts and fourth in strikeout rate (minimum 60 innings).

He’s continuing that success with Bowie, where in two starts he allowed a run in each across 9 1/3 total innings. He’s struck out nine batters thus far and limited right-handed hitters to a .191 average and no extra-base hits.

With Rodriguez, Bradish, Mike Baumann and DL Hall all capable of shedding their prospect status this season, Young could pair with left-hander Drew Rom to shepherd the next wave of Orioles pitching prospects.