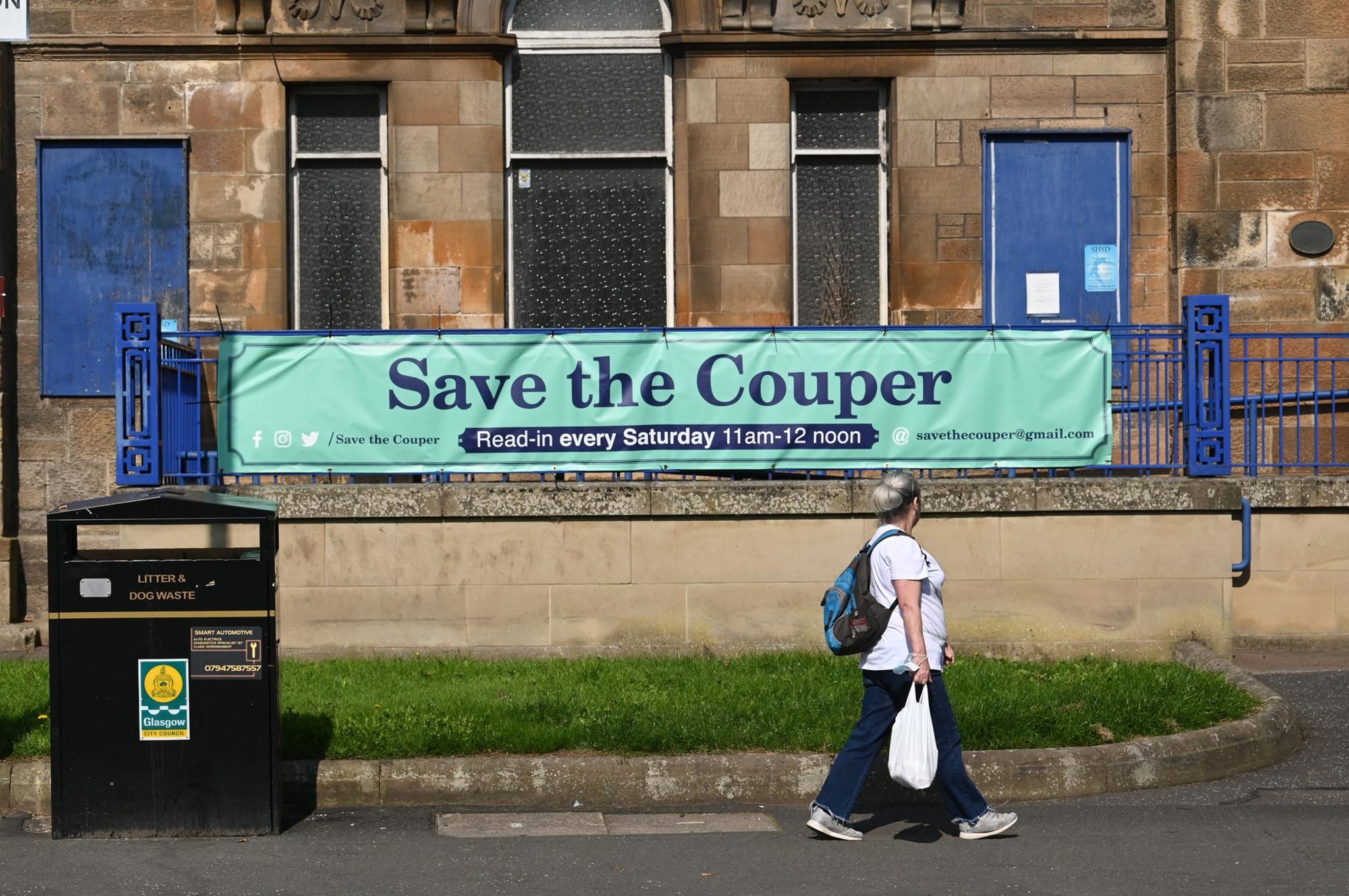 The books have been closed, the fold-up chairs put away and the waterproofs packed up as the long-running campaign to re-open Glasgow’s libraries comes to an end.

Over the weekend, the last read-in protests were held outside Couper Institute Library in Cathcart and Maryhill Library, which are among the seven in the city that have remained closed for some 22 months.

Mhairi Taylor formed the Save the Couper Institute and Library campaign with friends after meeting in their local pub one afternoon last May. On Saturday, she attended the library’s last read-in – effectively a sit-down silent protest with books – with a similar event taking place at Maryhill.

The Couper Institute Public Hall and Library, Cathcart, was also the focus of a well-organised community campaign to get its doors open. It will unlock its doors tomorrow. PIC: John Devlin.

Both will re-open on Monday 24 January, along with Whiteinch and GoMA, after Covid recovery funds were secured from the Scottish Government and Glasgow City Council channelled £100m more into Glasgow Life, the organisation which runs leisure and culture in the city. Barmulloch will open on 31 January.

Ms Taylor, who is head of equalities and diversity at Glasgow University, said to the Scotland on Sunday: “When we heard the funding came through, we felt very victorious, to be honest.

“I am really looking forward to going into the library next Saturday and reading a book, instead of sitting outside with one.

“It was fun doing the read-ins during the summer but its a different story when you are too cold even to get your book out of your bag.”

Around 40 supporters regularly attended the read-ins every week a hardy crew of 15 to 20 still showing up on the coldest of days.

Ms Taylor said: “On a personal level, I am really pleased we put the effort in but I am more pleased on a community level.

“It’s one resource we have left around here. It’s somewhere you can walk to, where you can get out the house. If you have lost your job, there are computers, there are printers. Macmillan holds sessions there, AA is there. These are all so important to the wellbeing of the community. It goes way beyond the library and the books.”

Libraries closed across the country due to the spring 2020 lockdown, with well-planned community campaigns springing up in several Glasgow neighbourhoods last April and May after the city council started to re-open some libraries and not others, with fears the health emergency was being used to justify closing services for good.

Campaigners started to physically dominate the library spaces. At Whiteinch, poems and posters were tied to railings, where books with re-imagined titles that shewed the ruling forces of Glasgow also hung.

Robert Mellish, of the Save the Whiteinch Library Campaign, said a gathering would be held for the “grand reopening”.

He said: “We have been campaigning solidly for nine months and the idea was just to keep the pressure on. One weekend we had 200 people at the read-in. We have been very organised, very disciplined. I think the council has been quite surprised.”

Councillor Susan Aitken, leader of Glasgow City Council said: “The city made a strong case for the additional funding that means every library now has a reopening date. While we must not forget that Maryhill and Whiteinch libraries both still need substantial capital investment for the future; I am looking forward to all of Glasgow’s libraries being able to welcome people back through their doors.”

A version of this article first appeared on our sister site, The Scotsman