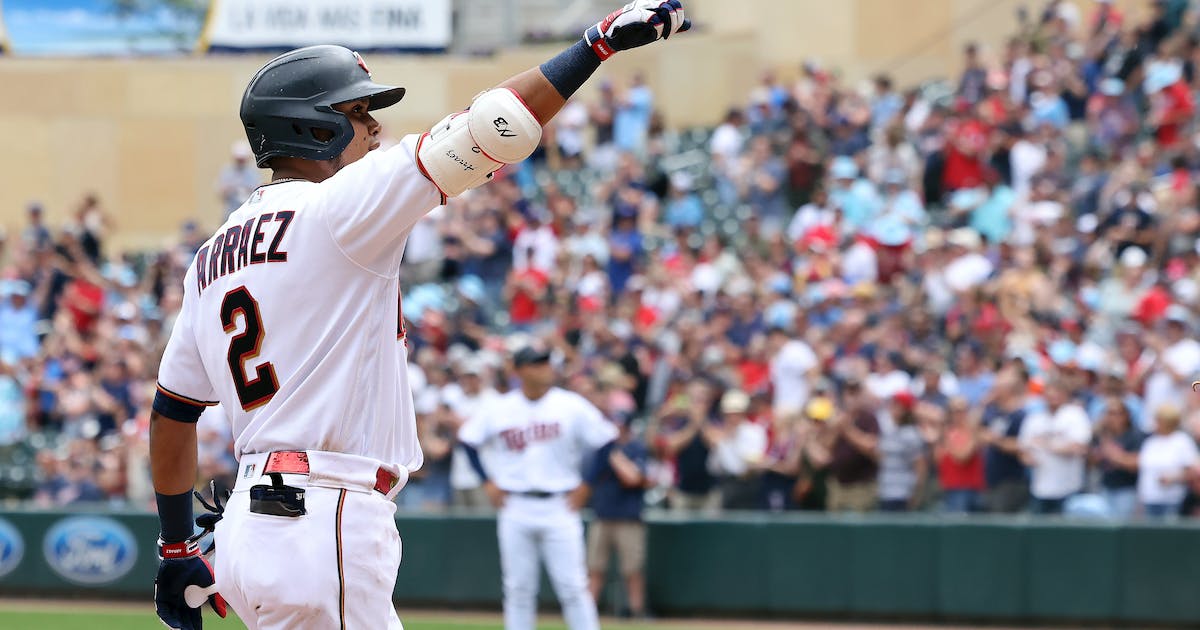 Luis Arraez stood watching the ball he just barreled as it soared toward the Target Field plaza. After it bounced on the concrete and fans swarmed to scoop it up, Arraez started his skip to first base.

But not before he stared straight into the Twins dugout while flipping his bat a good 10-plus feet into the air. And once he had finished rounding the bases and high-fiving all his teammates, he blew a kiss to the camera.

“When I hit the ball, I knew it was a homer,” Arraez said, adding of the bat flip, “I wanted to do it there for my teammates.”

The 25-year-old’s first career grand slam couldn’t have come at a more appropriate time, since Arraez is literally the best hitter in baseball at the moment, leading the major leagues with his .367 batting average and .449 on-base percentage.

Saturday’s game was more of the same for the Venezuelan, who went 3-for-5 with those four RBI and a run scored. He led the Twins to a 6-5 victory in front of 22,741 announced fans, taking the American League Central leaders to 35-26 overall. The AL East Rays dropped to 34-25.

Many players who approach the plate in the situation Arraez did — bases loaded, no outs, down 3-0 in the third inning — would be heaping pressure on themselves and fixating on hitting the ball as hard as they could.

But not Arraez. He maintained after the game that his focus and approach never wavered. He was just looking to put the ball in play. That discipline has earned copious praise from manager Rocco Baldelli and is a big reason why his numbers are what they are, considering this was only his third home run of the season.

“It’s really impressive the way he can go back and forth between letting the ball travel and spraying the ball all over the field,” Baldelli said. “… He makes it look pretty easy. It’s not easy. And most people can’t do both of those two things. They’re just not capable.”

Arraez was a major part of forcing Tampa Bay starter Shane Baz from the mound in that third inning after the righthander had given up five runs on three hits and three walks with two strikeouts.

His Twins counterpart, spot starter Chi Chi Gonzalez, struggled in the first inning, giving up five hits and three runs. But the righthander settled a bit to make it four innings with just three more hits allowed before Trevor Megill took the mound and eventually earned his second victory.

Emilio Pagan threw a 1-2-3 ninth with two strikeouts to preserve the one-run lead and take his eighth save. Even he deemed Arraez the headliner of the game, calling his offensive streak recently “mind-blowing.”

“It doesn’t make sense. Nobody should be able to get that many hits that many days in a row,” Pagan said. “He’s incredible. He puts a lot of work into it and hope he keeps it going all year. I told him yesterday he’s going to win the batting title, be the All-Star first baseman. I want him to get the Gold Glove, too, do everything.”

Those are lofty ambitions for someone Pagan called one of the “lifelines” of the team, bringing energy and excitement to the clubhouse. Arraez has always been a known hitter, but he has moved all around the field as a utility player throughout his Twins career. But if his defense can keep trending like his offense does, he might just accomplish everything Pagan described.

Arraez professes to never look at his batting average, preferring to just concentrate on the actual hitting. It’s about the vibe more than the statistics.