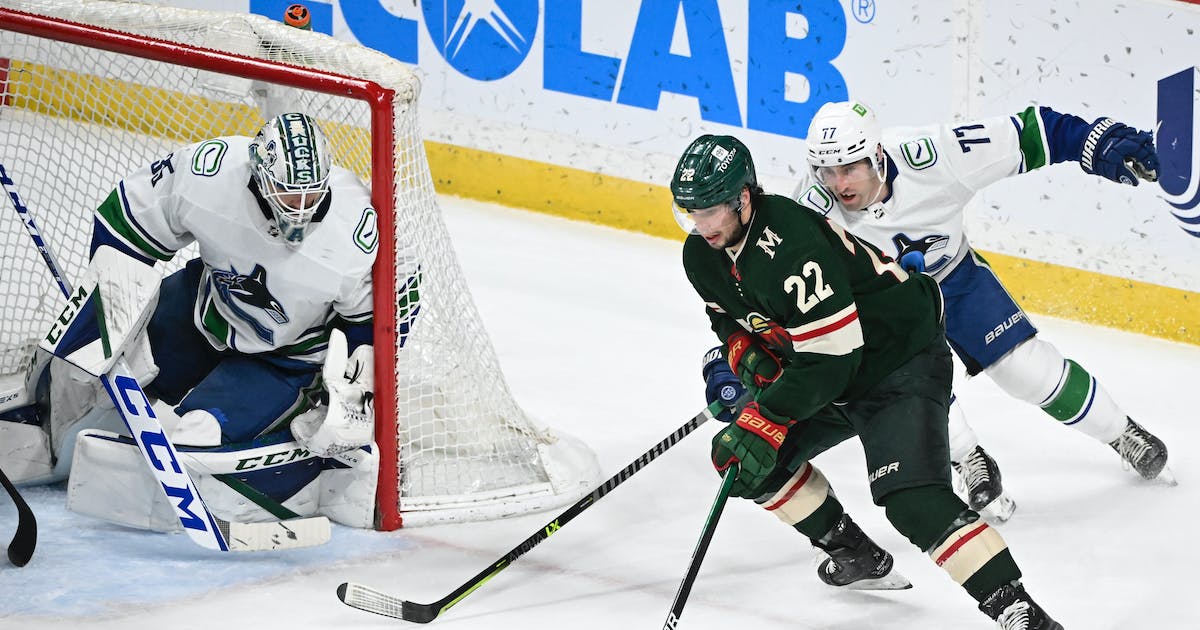 What’s been inevitable for weeks is now official: The Wild will face the Blues in the first round of the playoffs, a matchup St. Louis has dominated over the past few years.

But what hasn’t happened yet this season is a meeting at Xcel Energy Center, and the Wild continues to prove just how tough it is on home ice.

The latest example came Thursday when the Wild overwhelmed the Canucks in the third period to run away 6-3 in front of 17,894 and pick up its 11th victory during a 12-game point streak in St. Paul while matching the franchise record for wins at 49.

“We’re very strong here,” Kevin Fiala said. “We’re very comfortable. We’re strong at home, and we have showed that. So, it’s going to be a good series.”

Fiala continued his impressive tear, scoring twice. His second goal decided the game with 7:43 remaining in the third period when he circled half the zone and emerged from behind the net with a rising shot that bumped him up to 32 goals and made the score 4-3.

“I had a lot of energy left, and I thought maybe they were tired,” said Fiala, who’s tied with Ryan Hartman for second on the team in goals and is third in points at 77. “I wanted to shoot it, but I was like maybe I can hold on to it and go around.”

At 18:05, Kirill Kaprizov potted his 44th goal before Hartman dumped the puck into an empty net 42 seconds later. Cam Talbot totaled 21 saves while posting his 200th career victory in his 395th game and pushing his career-high point streak to 14 games to tie Devan Dubnyk for the Wild record. Talbot’s 12-0-3 over his past 15 starts.

“The biggest part tonight was the big two points for our group,” Talbot said. “It’s just another big win for us.”

Kaprizov and Mats Zuccarello finished with three points apiece, and Kaprizov sits at 97 with five games left in the regular season.

Those two combined on the Wild’s game-tying goal with 1:24 to go in the second when Zuccarello deposited a Kaprizov pass behind Canucks goalie Thatcher Demko soon after Nic Deslauriers fought Luke Schenn, who hit and cross-checked Kaprizov earlier in the period.

“I personally didn’t like the hit on Kirill and after he kind of gave him a little shove there,” Deslauriers said. “It was too much.”

After a scoreless first, Fiala kick-started the offense with a one-timer off the rush at 4:53 set up by Frederick Gaudreau, who also assisted on Fiala’s second goal. Matt Boldy’s assist tied Marian Gaborik for the longest point streak by a Wild rookie at seven games; this was Boldy’s ninth point in that span.

As for Fiala, he has nine goals and seven assists during an eight-game point streak.

“Personally, it’s nice to have a peak now instead of in the first few games,” said Fiala, who had just three goals through 25 games. “So, I’d rather have it now.”

Only 38 seconds later, the Canucks responded with an Elias Pettersson one-timer.

By 7:10, the Wild was back ahead after captain Jared Spurgeon’s shot through traffic eluded Demko at 7:10 for his 99th NHL goal. Demko ended up with 26 saves.

Again, though, Vancouver retaliated and the equalizer came at 9:22 when Matthew Highmore scooped up a bobbled puck by Spurgeon to skate in alone on Talbot.

Then at 16:09, Pettersson tallied his second of the night when he polished off a Conor Garland rebound.

But the Wild had the edge in the third, outshooting the Canucks 15-4. Neither team converted on the power play, with the Wild going 0-for-3 and the Canucks 0-for-2.

This outcome locked in a Wild vs. Blues series, but home-ice advantage is still up for grabs.

That should provide plenty of motivation for the Wild the rest of the way.