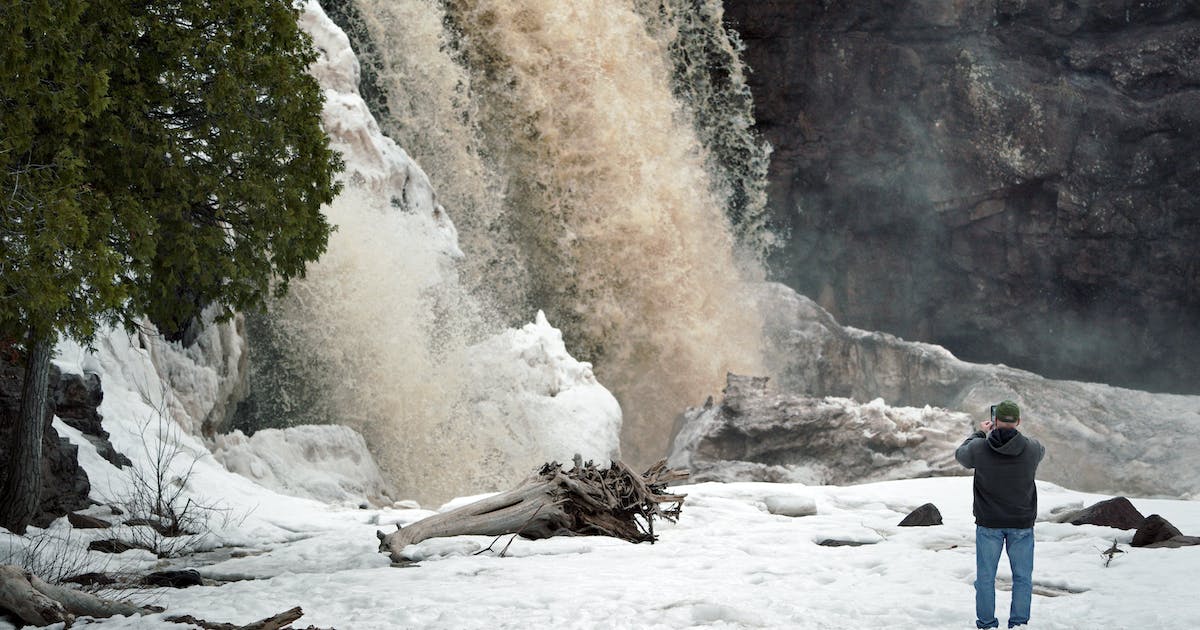 DULUTH — The 100-plus inches of snow that fell on much of the Arrowhead region this winter is pumping up North Shore waterfalls, aided by the area’s steep, jagged bedrock, formed a billion years ago when the continent split, lava flowed and massive glaciers sculpted the landscape.

Both the temporary “pop-up” kind and the established falls that swell from spring snowmelt are expected to be “epic” in the coming weeks, with “a record snowfall in the forest,” said Linda Jurek, executive director of Visit Cook County.

The organization in recent years has begun promoting the annual occurrence to drive traffic during the quieter spring tourism weeks, with plenty of resorts advertising “waterfall season” specials. But with so much snowmelt creating rushing rivers, this season should be better than most, Jurek said.

Water flows fast through the cracks and crevasses of the erosion-resistant volcanic bedrock, too dense to hold it, creating a network of streams and dramatic cascades and waterfalls. It’s critical to sustaining North Shore streams and rivers dependent on snow and rain for the fish and other life that exists along them, said John Jereczek, Lake Superior habitat coordinator for the Minnesota Department of Natural Resources. It’s that combination of a long spring thaw and bedrock that makes North Shore’s spring waterfalls so powerful.

For Jurek, a North Shore native, “waterfalls for me have always been a part of my spring journey up to Grand Marais.” she said, citing falls at Cross, Cascade and Brule rivers as favorites, along with the state’s highest falls, the High Falls of Pigeon River.

But she is especially fond of the short-term pop-up falls, which form in the spring when melting snow moves through the forest, choosing a path of least resistance to the shore of Lake Superior. Jurek is already seeing those from the road, she said, so the seasonal “break-up” of inland streams has started. It might be a while for lakes, though, with some of the region still buried under feet of snow.

It’s a much wetter spring in northern Minnesota than last year. More than 150 inches of snow fell in the Grand Marais area since October, according to the Duluth office of the National Weather Service. Weather observers near Two Harbors and Finland recorded 117 and 112 inches, respectively.

All that snow is improving drought conditions, with northeastern Minnesota currently ranked as “abnormally dry” or with moderate drought. Last year’s snowpack melted early, intensifying drought and spurring wildfires throughout the Superior National Forest. With a later than average snow melt, the start of wildfire season pushes back, said Travis Verdegan, predictive services coordinator for the DNR.

“We’re sitting good right now, but there is potential (for wildfire), because we have some level of drought classification,” he said. “It’s something we are keeping an eye on.”

“There is a lot of water on the landscape right now,” said Jesse Schomberg, of the University of Minnesota Sea Grant Program, meaning “bigger, higher and faster flows.”

And venturing onto river ice shelves to see waterfalls up close is dangerous, he cautioned.

“The water is still really cold,” he said, “and ice on a river is never particularly safe, especially at this time of year.”