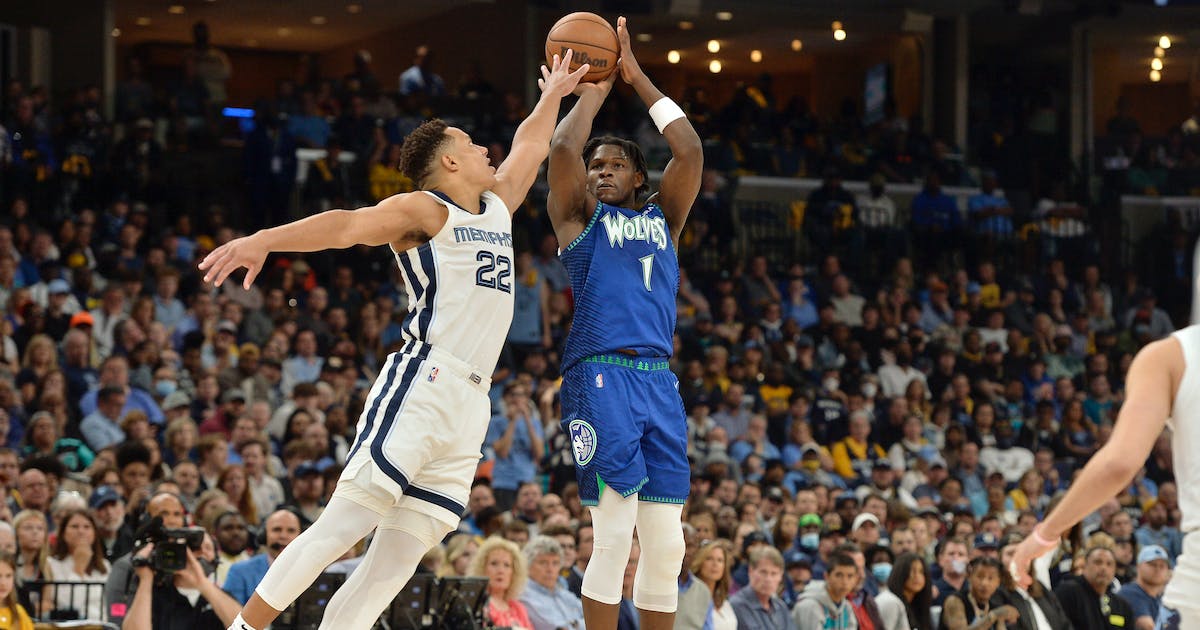 MEMPHIS – As the Timberwolves’ 130-117 playoff victory over the Memphis Grizzlies was about to tip off Saturday, players gathered for the jump ball at center court.

They had to stay there for a moment, as the officials waited for the green light from ESPN that it was OK to begin. While they stood around, Anthony Edwards went over to Karl-Anthony Towns, and they had a quiet moment amid a rocking FedEx Forum.

Towns said he called Edwards by his own personal nickname for him, one not printable in a newspaper, and dished out some simple advice.

Edwards said his relationship with Towns has grown a lot over the last season, and they can be honest with each other. They shared this one final moment before walking onto the biggest stage of the season.

“We can just talk to each other in the heat of the battle, the heat of the moment,” Edwards said. “In the beginning we always say, ‘I want this,’ or ‘Make sure we do this.’ We just exchanged that between each other and that was it.”

They bumped fists and got to work.

Towns played like the All-Star moniker he earned after an off-night in Tuesday’s play-in game against the Clippers with 29 points, 13 rebounds. Edwards played like an All-Star announcing his full-throated arrival with 36 points and six assists.

The Wolves don’t have much of a playoff history, but Edwards now holds the record for the most points scored by a Wolves player in their first career playoff game. The Wolves also won just their second playoff game since 2004 and will play Game 2 on Tuesday in Memphis.

Edwards and Towns were the reasons why, as they helped make up for a 2-for-11 night from D’Angelo Russell. Malik Beasley pitched in 23 off the bench as the Wolves led most of the night and answered every Memphis run despite 32 points from Ja Morant.

For Towns, Saturday’s performance was a chance to rectify what happened Tuesday, when he was almost a non-factor against the Clippers. No matter what kind of coverage Memphis threw at him, he handled it. He stayed out of foul trouble and even put vaunted Grizzlies rim protector Jaren Jackson Jr. on a poster in the third quarter.

“I just really feel like that’s what I’m supposed to do,” Towns said. “It shouldn’t be something we should be celebrating, like ‘Oh, you got a chance to play a really good game on a national stage. You should be really proud and excited.’ I’m supposed to do that. … I don’t want to act like it’s something that should be abnormal. That’s what I should be doing on a nightly basis, especially now.”

Coach Chris Finch said of all the things that concerned him coming into the series, Towns’ performance was not one of them.

“He’s a great player. That’s what enabled him to deliver the performance. I wasn’t worried at all,” Finch said. “… He’s a franchise star. There hadn’t been many nights like he had Tuesday, so it wasn’t like it was some sort of pattern or anything like this.

There was a pattern, albeit a small one, of Towns not living up to his lofty standards in postseason play. Towns shook off his struggles in a pressure-cooker environment dating back to his first playoff series in 2018.

Edwards looked like he felt no pressure at all.

He said he especially enjoys playing Memphis because of the fans’ trash talking, even from kids.

It looked like he did. Edwards shot 12-for-23 and came up with a bucket, from everywhere on the floor, almost every time the Wolves needed one.

“I love my shots,” Edwards said. “Whatever shot I take, whether it’s a step-back trey ball or a step-back mid-range. Or a floater or a layup. Whatever my shot is, I like it. Sometimes coach may not like it, but I love my shot.”

Edwards said the freedom Finch allows him and the team to have helps create performances like the one he had Saturday.

“I love Finchy,” Edwards said. “He lets you play, for sure, until a game gets a little tight and you might take a shot that he doesn’t like, he might yell at you a little bit, but other than that, it’s all love.”

There were no complaints Saturday.

“He’s a special talent,” Towns said. “I think we all know how special he is. He’s shown it night in and night out. When he’s playing basketball at this kind of level, he’s almost unstoppable. He is unstoppable.”