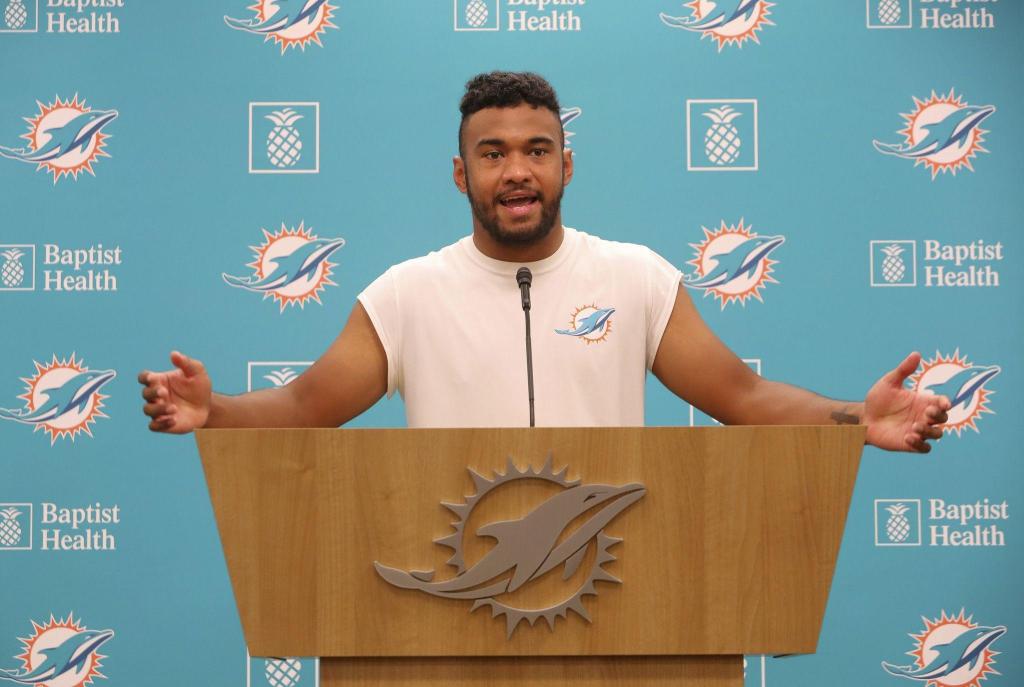 Miami Dolphins quarterback Tua Tagovailoa’s rocky relationship with former coach Brian Flores has been documented in the time since Flores was fired on Jan. 10, the day after the 2021 season concluded.

On Wednesday, in Tagovailoa’s first press conference where he addressed football topics with reporters since the end of last season, he had a lot of great things to say about his relationship with new coach Mike McDaniel.

But not nearly the same can be said about his reaction to questions about former Dolphins coach Brian Flores.

Amid a South Florida Sun Sentinel report of a locker room meltdown between the two at halftime of the Dolphins’ 34-3 Jan. 2 loss at the Tennessee Titans and team owner Steve Ross noting communication as a factor that led to Flores’ firing, Flores had previously contested that his relationship with Tagovailoa ever deteriorated.

Tagovailoa was indeed asked on Wednesday, and his answers, or lack thereof, didn’t seem to fall in line.

“I have no comment toward any of that,” Tagovailoa said, when initially asked about his reaction to Flores’ firing. “I don’t come up with those decisions. I don’t make those decisions.”

He was pressed further to comment about his relationship with Flores, and Tagovailoa’s one fond memory he named after two years with him as coach was that of his first day as a Dolphin under him.

“Big question,” Tagovailoa started when asked about that relationship. “I’ll tell you this: I’m very thankful that he drafted me to come here to play for the Miami Dolphins. That’s what I would say.”

The tone was much different when speaking about his early impressions of new coach Mike McDaniel, who was hired from his role as San Francisco 49ers offensive coordinator by Miami to replace Flores. Tagovailoa said he feels supported by McDaniel.

“I think support, for any of us, means a lot,” he said. “To be able to have the support of the head coach, the head guy, that should tell you a lot.”

That much has been evident since McDaniel’s first documented conversation with Tagovailoa as Dolphins coach, when he phoned him from his private flight to Miami. It has been further reinforced earlier this month, participating in Tagovailoa’s “Luau with Tua” charity event, banging Polynesian drums on stage.

“That’s kind of how the relationship has been. Very supportive, wants to hang out,” he said.

Tagovailoa said McDaniel even acts upset when he doesn’t get invited to player outings. A reporter asked if players actually feel they can have the head coach around when they hang out, and he even doubled down on the notion.

“This one, you can!” Tagovailoa proclaimed about McDaniel. “He’s that cool.”

McDaniel isn’t the only thing that has Tagovailoa excited about the new-look 2022 Dolphins after the team also made a series of offensive acquisitions with star receiver Tyreek Hill and touted left tackle Terron Armstead highlighting the group.

“The locker room feels different,” Tagovailoa said. “I just feel like there’s so much things that have happened, a lot of changes, and a lot of good changes, I guess, with the people that we picked up.”

Having the tools necessary to succeed has led to a national narrative that the pressure is on Tagovailoa this season, without the previous excuses he had for uneven play in his first two NFL seasons.

“I don’t feel more pressure that we have acquired all these guys,” he said, “but it’s more of an opportunity that I get, that we all get, as a team, to show what we can do this year.”

Tagovailoa noted that an emphasis this offseason has been on his footwork. He also said McDaniel’s offense has similarities to what he ran in college at Alabama, which made him a top draft prospect in 2020.

Although many hope to see Tagovailoa add some zip to his mid-range throws and yards to his deep ball, he said Wednesday he doesn’t feel he’s able to put anything extra on his passes despite being further removed from his November 2019 hip injury that cut his college career short and last season’s rib and finger ailments.

“I don’t feel any of that at all,” said Tagovailoa. “I think the most important thing is timing with these guys. These guys are going to get there, just lay it up to a spot for them and have them go get it.”

And a great priority has been placed on yards after catch in this new offense. It may not be a raid of deep throws from Tagovailoa hitting Hill, fellow wide receivers Jaylen Waddle and Cedrick Wilson and tight end Mike Gesicki, but the Dolphins will look to put pass catchers in a position to pick up what is commonly referred to as YAC.

“We want to YAC the heck out of teams,” Tagovailoa said.