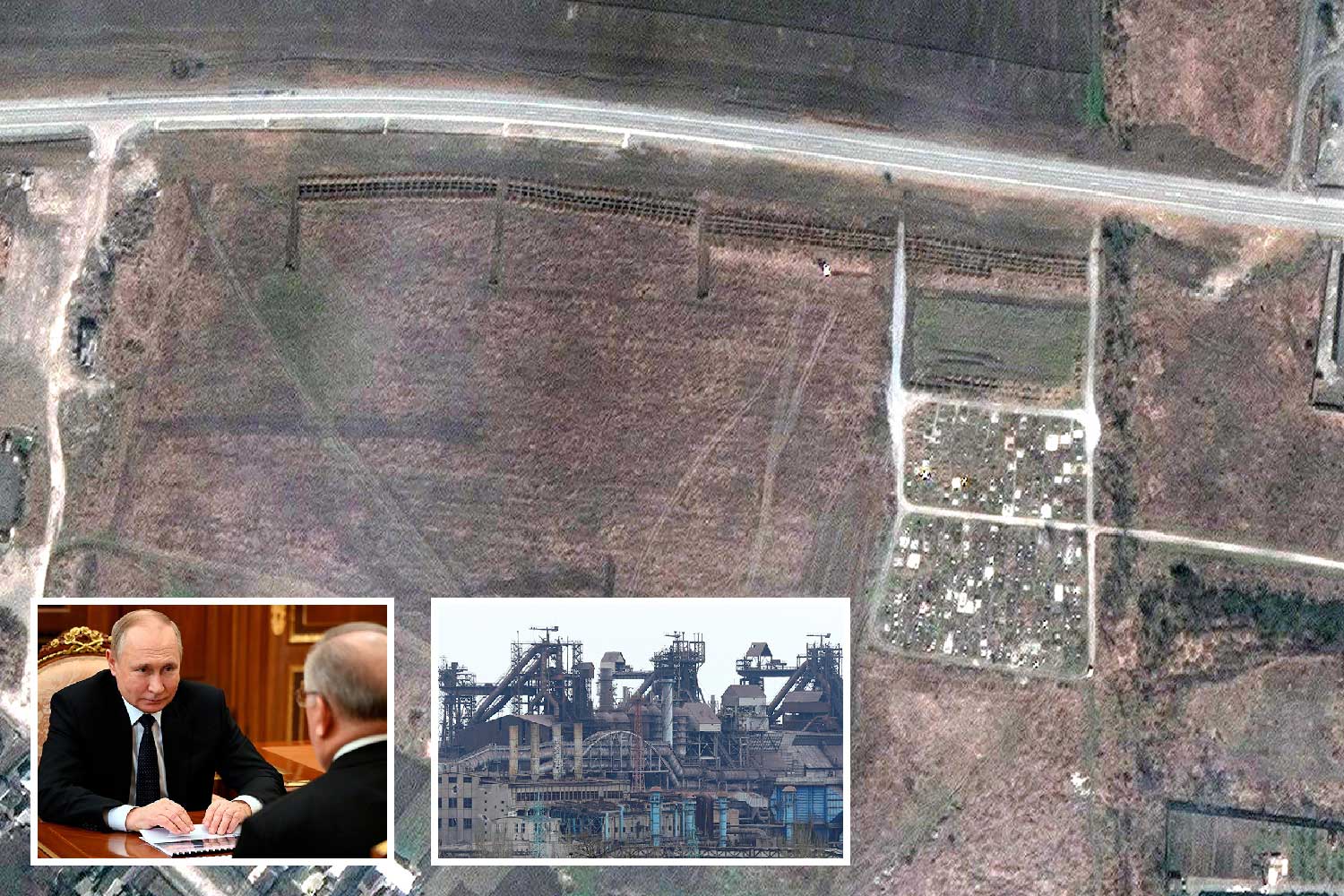 The graves are lined up in four sections of linear rows in the village of Manhush and measure 85 metres per section and contains 200 new graves, according to Maxar Technologies pictures.

The images were taken between mid-March and mid-April and are said to show just a fraction of new graves dug over the past few weeks.

The harrowing pictures appear to support claims made by Mariupol’s mayor Vadym Boychenko that Russian troops had dug huge trenches near Manhush and buried hundreds of dead civilians.

Boychenko said bodies had “started disappearing from the streets” of the city and that Mad Vlad’s forces were “hiding the trace of their crimes and using mass graves as one of the instruments for that”.

“They are taking the bodies of the dead residents of Mariupol in trucks and throw them into those trenches,” he said during an online briefing.

Ukrainian officials said on Thursday the mass grave site could contain as many as 9,000 bodies.

It comes as Putin called off an assault of Azvostal steelworks currently housing the last of Mariupol’s brave Ukrainian defenders and innocent civilians.

Instead, the Russian despot order his troops to blockade the complex, which has 2,000 Ukrainian troops holed up in it.

Most read in The Scottish Sun

He gave the fresh orders to defence minister Sergei Shoigu and called the partial retaking of Mariupol a “success”.

Ukrainian fighters, along with a small group of civilians, are refusing to budge from inside the Azovstal steelworks – despite Putin’s threat to starve them.

The brave fighters were told earlier this week to surrender and promised they will would be allowed to live, given medical attention and looked after.

But troops are said to still be holed up in the steel mill which boasts a large underground network of tunnels.

In a moving piece, Bloomberg columnist Andreas Kluth remarked their efforts were something of a marvel as we have seen in other events throughout history.

He referenced the incredible last stand by the 300 Spartans at the Battle of Thermopylae when the Persians’ failed attempt to conquer Greece in 480 BC.

He wrote: “A tiny force centered around 300 Spartans held the gap for three days until they were betrayed and outflanked.

“All died. But they had slowed down the Persian assault. The following year, the Greeks won the war.”

Kluth continued: “The Ukrainians at Azovstal are fighting for one another, for their country, and for history.

“Maybe, like the rebel samurai and so many others before, they’re also fighting just because the whims of fate placed them in a particular place at a particular time, and they heard the call to take their last stand.

“If they perish, it will be on their own terms, and with honor.

The Azovstal troops are likely inspired by the country’s leader President Volodymyr Zelensky whose fierce commitment to defend his country has impressed the world.

As Russian troops relocated to the Donbas as part to begin battle to seize the east, he vowed they will keep defending themselves.